Displaying Alerts with UIAlertController in Swift

Written by LearnAppMaking on July 15 2020 in App Development, iOS 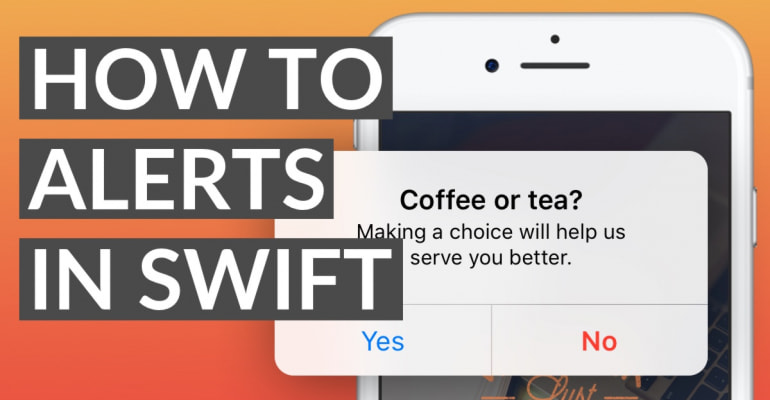 In this tutorial, you’ll learn how to use the UIAlertController class to display alert dialogs in your iOS app. We’ll dive into setting up the alerts, responding to user actions, and getting input from the user with text fields.

The UIAlertController is a basic but important part of the iOS SDK, and it’s the default way to ask users to confirm an action. On top of that, UIAlertController also supports the action sheet, which is a convenient dialog style that allows your app’s users to quickly take action.

This tutorial is specially written for beginner iOS developers. Working with the UIAlertController is a fundamental topic for practical iOS developers.

You’ve probably seen dozens of alert dialogs in iOS, Android, on the web, and on your Mac. Alert dialogs are as old as computers themselves! Even before computers had GUIs, you’d type “Y” or “N” at the command-line.

This is what an alert dialog looks like on iOS: 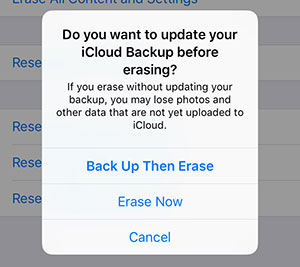 Alerts are crucial when building your app, to ask the user for confirmation of a sensitive action. Deleting data, signing out, giving permission, confirming a change — they’re tasks that your app’s user needs to explicitly confirm before continuing.

As you can see in the example alert above, alerts help with grouping similar actions together and presenting them as one. Do you want to make a backup before erasing? Do you want to pay with PayPal or checkout with your creditcard? Do you want to take this incoming call or send an “I’ll call you later” message?

Most alerts can’t be dismissed without taking an action, and that’s why they’re so effective. When an alert is presented, it fills the entire iPhone screen. You can’t move away without making a choice. Such an alert is known as a modal dialog. On iOS, they’re simply called alerts.

As a design rule, you should always have a Cancel option that dismisses the alert and reverts the app to its previous state. This helps a user who’s confused, and wants to go back without making a decision at all.

So… enough UI/UX talk. Let’s check out how you can create an alert with UIAlertController!

Here’s how the above code looks visually: 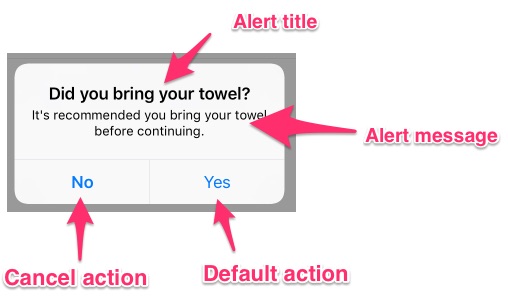 Using the UIAlertController(title:message:preferredStyle:) initializer is pretty straightforward. You provide a title and message as strings, and then choose an alert type from the UIAlertControllerStyle enumeration. In the above image you see the title and message. Optionally, you can leave either empty and create an alert with just a title or message.

You always have to “present” an alert, to show it to the user. Presenting a UIAlertController can only be done on a currently visible view controller that’s part of the view controller stack. Unless you’re doing something crazy, it’s most likely that you’re presenting the dialog from an active view controller already.

When creating your alert controller, with the UIAlertController(··· preferredStyle:) initializer, you can choose between two options:

Here’s what that exact same alert looks like, with both options:

Action sheets are pretty cool. They have 3 benefits compared to alerts:

When should you use an alert, and when an action sheet?

Often, action sheets don’t have a title or message at all. Instead, you let the buttons speak for themselves. When you present a user with an action sheet, always give them the option to get out of the action sheet with a Cancel button.

Fun Fact: Prior to iOS 8, you would use the UIAlertView class to display alerts, and the UIActionSheet to display action sheets. You’d use the typical iOS target-action mechanism to respond to user interaction. Since then, those classes have been merged, and actions now take closures to respond to a user’s tap.

Responding to UIAlertController with Actions

The UIAlertController class provides you with a mechanism to respond to user interaction. When a user taps an action you’ve attached to your alert, it calls a closure you’ve associated with that action.

When you deconstruct the above example code, you’ll find this:

The closure has one parameter action of type UIAlertAction. It’s a reference to the action that’s invoked and it allows you to distinguish between actions, for example when you use one closure for multiple actions.

Actions, and their buttons, can have three styles:

By default, the .cancel action is highlighted in the alert. You can see that in the example images above. The cancel option is effectively biased, which means the user has to make a conscious effort to confirm an alert. This means they’re less likely to make a mistake!

The .destructive style is usually red, indicating to your app’s users that this is a dangerous action or one that cannot be undone.

Even if you change the order of adding the actions to the alert, the Cancel button is always shown first. The UIAlertController can also have a preferred action. When specified, the alert then highlights that action.

The cancel button is the preferred action by default. You can also assign an action yourself, but you’ll first have to add it with the addAction(_:) function before assigning it to the preferredAction property of UIAlertController.

You can also add a text field to an alert. Like this:

In the above code sample, this happens:

And here’s what it looks like in your app:

Pretty neat, right? This effectively turns the alert into a prompt you can use to quickly ask for user input.

And that’s all there is to using alerts! You now know how to create one, how to configure it, how to respond to user actions, and why it’s sometimes better to use an action sheet than an alert dialog. Awesome!