Written by LearnAppMaking on August 3 2020 in App Development, Swift 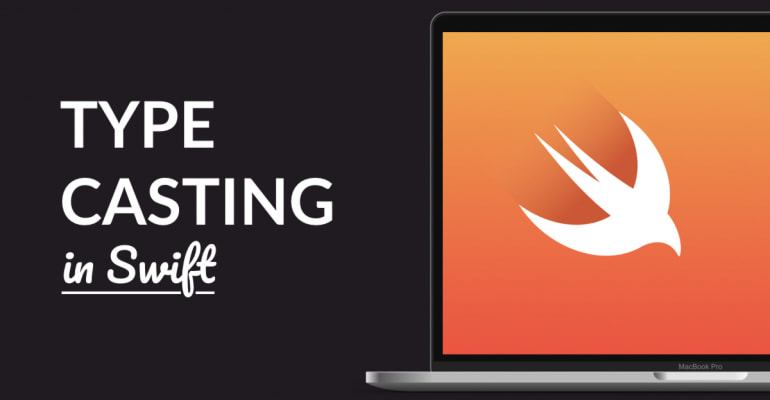 You use type casting in Swift to treat an instance of a particular class as a subclass or superclass in the same class hierarchy. But… what does that even mean?

Type casting is a powerful programming concept, because it helps you to write flexible and reusable code. It’s crucial for iOS developers to master, because type casting is frequently used in practical iOS development.

In this tutorial you’ll learn how to use type casting in Swift. We’ll take a look at upcasting with as, downcasting with as? and as!, and type checking with is.

What is a Type?

First things first. The Swift programming language uses types, like classes and structs, to represent different kinds of data in your app’s code.

Types in a programming language are there for us, the developers. We use types to represent different kinds of data. The Swift compiler doesn’t care much about a type, beyond the data it represents! It simply reads our code and translates it to 1’s and 0’s a computer can understand.

The Swift programming language is strong-typed. That means that every variable needs a type, and once you’ve given a variable in your code a particular type, it cannot be changed.

That’s pretty rigid and often leads to verbose code, so the Swift programming language has features like type casting, type inference, protocols, Any and AnyObject, opaque types and generics to create concise, flexible and reusable code.

Here’s an example of a variable with an explicit type annotation:

In the above code you define a constant named riddle of type String, and you assign it the string literal "Tinker Tailor Soldier Spy". On the second line the value of riddle is printed out. The type of riddle is explicitly provided with a type annotation, i.e. riddle: String.

See that bit of text, Tinker Tailor Soldier Spy? That’s human-readable text for us developers, but for Swift it’s just another way to represent data. This distinction is important. We’ll discuss why in the next chapter.

What is Type Casting?

With type casting you treat an object as one of another type. The underlying object doesn’t change, merely the type you use to describe that object.

Let’s look at an example. We’ll describe three different classes. The first class House has one property windows of type Int and a simple initializer. Like this:

The second class Villa subclasses House, thereby inheriting its windows property. It also adds a hasGarage property, of a boolean type, that indicates whether this villa has a garage for a car.

The subclass : superclass syntax, such as Villa: House, indicates that Villa subclasses House, and thereby inherits the properties and functions of House. It makes sense: a villa is a house, just like a dirtbike and a car are both vehicles, subsequently inheriting the property wheels and function drive().

The third class Castle also inherits House. It adds a property towers, and has a simple initializer.

The class hierarchy is as follows now:

Both Villa and Castle subclass House. As a result, they both have a property windows in addition to their own properties hasGarage and towers. It’s essential to note here that the Castle class does not have a hasGarage property, and Villa does not have a towers property.

Looking back on the class hierarchy, we can do this:

A helpful way to look at this, is to remember that type casting works vertically and not horizontally. You can go up and down but not left and right in the class hierarchy. 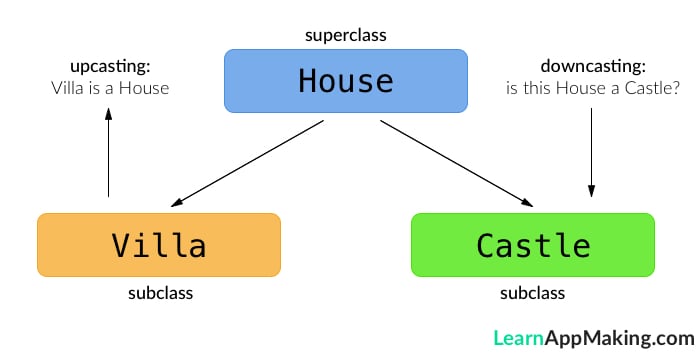 Note that the type annotation for house, and the object we assign to it, have different types!

This is called upcasting. Because House and Castle are in the same class hierarchy, you can assign an instance of Castle to a variable of type House. As explained earlier, it’s like saying: a castle is a house.

The upcast is implicit, so you don’t explicitly code it. You could though, like this:

What’s so interesting about the above code, is the type of house and it’s actual value. Let’s check the dynamic type of house, like this:

You can use the type(of:) function to get the type of a value. And it prints out Castle! Wait a minute…

How can house be of type Castle when we clearly declared it with type House? And it gets more interesting. Check this out:

Remember when we talked about data and its representation? About the difference between the actual data, and the way you treat it? The above examples explain that difference.

Internally, the value of house has data as represented by the Castle class. It has windows and towers! But we’re describing it with the House class, and as a result, we can’t access the towers property.

Here’s how. First, let’s start again with that implicit cast:

Even though house has a value of type Castle, it’s described as type House, so we can’t get to house.towers. Yet…

You use the as! keyword to force-downcast one type to another. More on that in the next chapter.

There we go! The value was the same all along, but now we merely described it using a different type, so we can get to the property towers.

Here, I’ll prove to you that we’ve been using the same object all along:

The above code tests identicality with the === operator. Both house and castle refer to the exact same object. The House and Castle classes are merely used to describe them. (Feel free to test this yourself in a playground!)

Can we cast between unrelated types? No, you can only downcast or upcast. You can’t cast from Castle to Villa, like this:

This results in a fatal error: cast from ‘Villa’ to unrelated type ‘Castle’ always fails.

You can use 4 different syntaxes for casting in Swift:

Upcasting is implicit in most cases, so you’ll almost never use the as keyword when coding your app. As explained in the previous chapter, upcasting is possible when a subclass “is a” superclass, like how a Villa is a House.

Type Checking with “is”

You use the type check operator is to check the type of an instance. The expression returns a value of type Bool, so it’s perfect to use in a conditional.

The above expression tintagel is Castle returns true, so the first conditional clause is executed.

The is operator returns true for any implicit upcast in the class hierarchy. When you use is to check for a superclass type, it also returns true. Like this:

In the example above, you see that:

OK, let’s get down to downcasting! (Pun intended.)

Force Downcasting with “as!”

Downcasting is the opposite of upcasting.

An upcast is succeeds because a Villa is a House. That same rule doesn’t always apply to downcasting, because a House is not always a Villa. As a result, downcasting can fail.

You can use two kinds of downcasting:

If you’re familiar with optionals, you’ll probably see where this is going.

You should only use force downcasting with as! if you’re sure that the downcast will succeed. When a downcast fails with as!, your app crashes. This is similar to force unwrapping an optional.

In the above code we’re creating an instance of class Castle and assign it to a variable house of type House. Even though the instance is of type Castle, we can’t access the property towers because the type of house is House.

In the second part, we’re force downcasting house to type Castle with the as! keyword. This results in a non-optional value of type Castle that’s assigned to the constant castle, and subsequently we print out the value of the towers property.

Again, it’s not the value that changes! We’re working with an instance of Castle throughout the code. What changes is the type we use to describe or treat that value.

Optional Downcasting with “as?”

Note that the type of villa is Villa? – an optional – because as? results in an optional. Like any other optional, you’ll have to unwrap it.

In the above example you’re creating an array with instances of Castle, House and Villa. Thanks to polymorphism, the type of houses is inferred as [House].

Why? Because every instance in the array either is a House, or has House as its superclass. Make no mistake though, there are instances of 3 different classes in this array!

Then, let’s write a simple for-in loop. Like this:

Here’s what happens. The code loops over every item house in the houses array. The code within the squiggly brackets { and } is executed for every item in houses.

Within the loop you use optional casting and optional binding to check the type of house, and subsequently invoke one of three conditional clauses.

Let’s look at that first expression house as? Castle. Because it uses optional downcasting, the result of that expression is an optional. It has Castle? as its type. So when the downcast succeeds, it returns a value, and when it fails, it returns nil.

You can combine that with optional binding. As a result, a value is assigned to castle when the optional downcast succeeds. When it fails, the conditional is passed over, and the next else if clause is evaluated.

In the above code we’re also combining if, else if and else to control the flow of our code. We respond to cases where house is either Castle or Villa, and when neither of those are true, the else class is invoked. At this point, house is of type House, so we can access house.windows.

So far we’ve only looked at examples of type casting. What does type casting look like in an actual iOS app?

I ran a few searches for type casting through the codebase of an app I built recently, and I found no less than 167 cases of as?. Here’s what I used type casting for:

Type casting is a frequent occurence in practical iOS development. Let’s look at an example.

When you want to use a custom table view cell in a table view controller, you subclass UITableViewCell. As a result you inherit the properties of the table view cell, and gain the ability to customize them or use your own custom UI with a XIB.

Then, when you want to provide your cell to the table view, you implement the following function:

See how that function returns an instance of UITableViewCell? In fact, the type of cell is UITableViewCell. You’ve defined a property on your custom subclass, so how are you going to access that now?

The downcast succeeds as long as dequeueReusableCell(...) returns an instance of your subclass. You’ll need to take in account that the downcast can fail, so you use as? to gracefully handle the error when that happens.

Practice is the shortest path to mastery. In this tutorial we’ve written a lot of code, and I wanted to give you the opportunity to play around with type casting.

You’ll find a Swift Sandbox below, including the House, Villa and Castle classes we used earlier. See if you can re-create the example code from the previous chapters, to improve your understanding of type casting.

Pfew! That was quite some code we wrote there. I hope you now understand how type casting works, and how you can treat one type as another in Swift.