Written by LearnAppMaking on December 8 2020 in App Development, iOS, SwiftUI 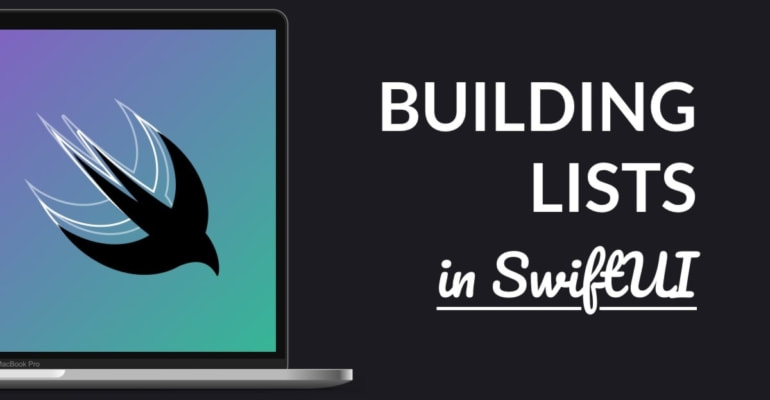 A List view in SwiftUI shows rows in a vertical, single column. It’s a scrollable list of data that you can interact with. In this tutorial, we’ll discuss how you can create and customize a List view with SwiftUI.

Let’s take a look at the List view in SwiftUI. The most basic setup for a list is actually pretty simple.

Consider that we’ve got an array of Movie objects, each with an id and a title. With the above code, you can display a List view with Text items for each of the movies in the array. 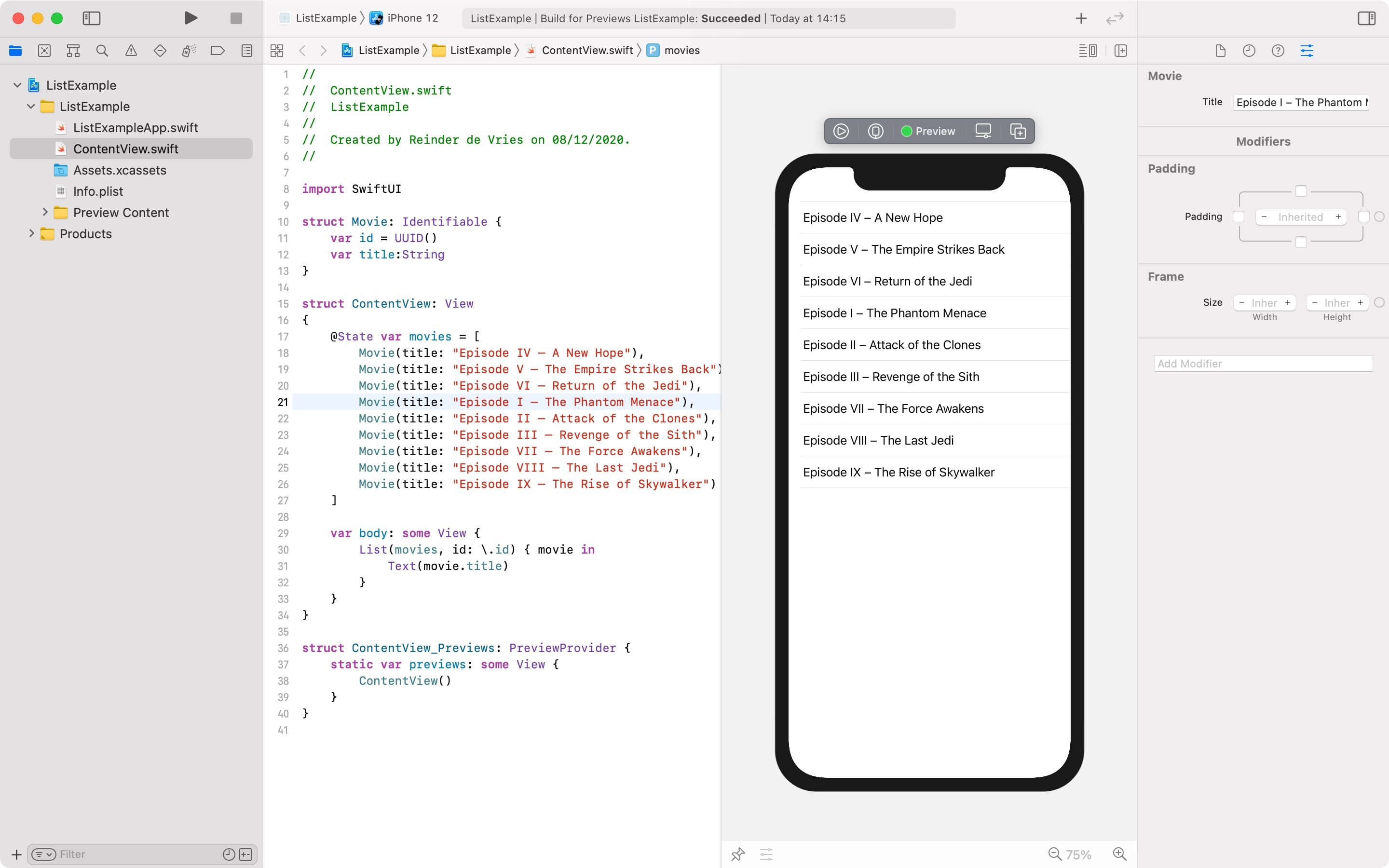 In the above code we’re working with an array of Movie objects. Here’s the code for the Movie struct:

This is the array of Movie objects that the List view is based upon:

Let’s take a closer look at the code we earlier used for the List view:

That last parameter is the most interesting. It’s the closure that provides the content for each row in the List. Similar to map(_:), it’s called for every item in movies and it should return a view to display. In the above code, we’re simply returning a Text view. We’re also making use of the provided movie object.

If you want to follow along with the steps in this tutorial, you can create a new Xcode project. Choose the App template, SwiftUI for Interface, and SwiftUI App for Lifecycle. You can work in the default view ContentView, or make your own. Don’t forget to update it in the App struct!

The List view is essentially a container for subviews that can be scrolled. It’s similar to views like VStack and HStack, and UITableViewController for Storyboard-based apps.

You can, in fact, create a plain ol’ static List view from a few subviews:

What makes List special, is that it can create subviews dynamically using a data source and a bit of code that provides subviews for individual items. And in SwiftUI, you can combine List with the ForEach to do even more.

In the above code, we’ve separated the previous parameters for List and added them to the ForEach structure.

The ForEach structure computes views on demand from the movies collection, similar to how List did that. These views are subviews of List, which means you get the same result as you would with only using List.

So what’s the benefit of using ForEach? First off all, ForEach functions more like a generator or data provider than a view. Using ForEach also gives you access to data actions like onDelete(), onInsert() and onMove(), which List cannot.

The ForEach structure can be used with any kind of view that can contain multiple subviews, like stacks. Here’s an example:

You can also use ForEach with onDelete(), to remove items from the data source underlying the List. Here’s an example:

The onDelete() modifier is called when you swipe a list item to the right, as you would do to delete an item on iOS. It’s an affordance that’s also built in the ubiquitous table view, and of course, List has it too.

For this to work, though, you’ll need to mark the data source as state. In our example, that means we’ll have to add the @State property wrapper to the movies property.

The view is now dependent on the state of movies, which means that if you remove an item from the movies array, the view now updates too.

You don’t have to code the view for the list’s rows inside the List. You can also abstract them into a separate view, and reference the view in the list. Something like List(···) { MovieRow() }.

If List will just display a bunch of rows in a list, and ForEach will generate views based on a data source… that means we can use both to create sectioned lists. Let’s find out how!

First, we’re going to make a few changes to the Movie objects. Like this:

The Movie struct now has a property period, which we’ll use to create a sectioned list. Each movie period gets its own list section.

The enum uses raw values, so we can use them as the Period type and as String values. The CaseIterable protocol lets us iterate the enum as an array, via its allCases property.

Next up, we’ll need some movies of course!

Alright, now for that sectioned list. Here’s the code that we’re using: 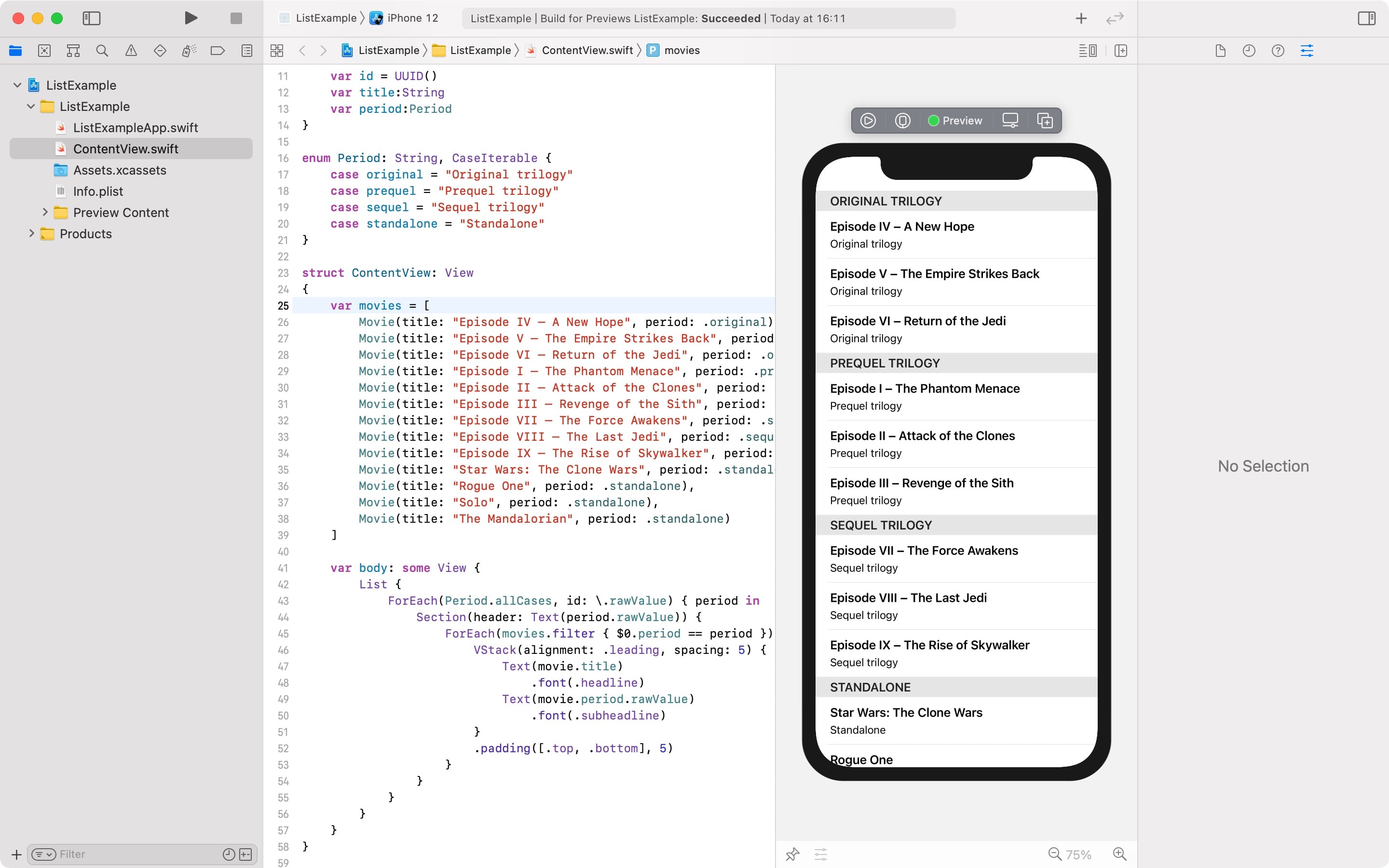 How does this work?

It’s smart to remember at this point that SwiftUI is a declarative language to build UIs. We’re really just describing the hierarchy and structure of the User Interface that we want, and what data SwiftUI should base the UI upon. SwiftUI takes care of the rest.

Even though we’re using dynamic constructs like ForEach, the views are fixed and static until the data changes. We might as well have put all these movies, sections and stacks into one big hierarchy of code. The ForEach is there for us, the programmer, so we can code less and build more. Awesome!

In this tutorial, we’ve discussed how List works and how you can use it to build row/column-like layouts in SwiftUI. Here’s what you learned: