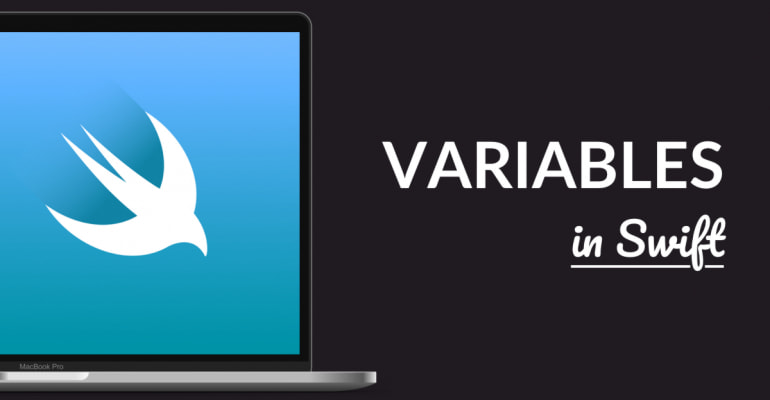 You use variables and constants in Swift to store information. It’s that simple!

Variables are the “things” in your code, like numbers, text, buttons and images. Every bit of information your app uses, is stored in a variable or a constant. Knowing how variables work is the first step of learning iOS development.

What Are Variables and Constants?

Let’s start with a simple example. Check this out:

What’s happening in the above code?

As a result, the value 42 is printed out. Try it! Click Run in the sandbox above, and see what happens.

The syntax for declaring and initializing, as shown in the previous example, is as follows:

Can you also change a variable’s value? Yes! Like this:

You declare a constant with the let keyword, like this:

See how the syntax is exactly the same as before, except for the let keyword?

Keep in mind that you can’t change a constant after it has been initialized. This code will result in an error:

The print() function is useful for quickly printing out the value of a variable to the Console or debug output window. It’ll show up in Xcode below the editor, or in the above Sandbox in the output window. This is often called “poor man’s debugging”, because it’s such a simple debugging tool.

Variable and Constant Types in Swift

Every variable and constant has a type. To find out how types work, let’s look at an analogy: shipping containers.

Shipping containers have lots of different shapes and sizes. You can’t fit a house in a boat-sized shipping container, and it doesn’t make sense to put one small chair in a container that fits 500 flatscreen TVs.

Types in Swift are similar. Different variable types can store different kinds of information. You can’t assign a value of one type to a variable with a different type. And once a type has been set, you can’t change it.

This constant name has type String. You’re assigning it a value "Bob", which is a string literal. It’s the literal value of the text “Bob”. It’s called a “string”, because it’s a string of characters, or just text.

You can’t do this:

Why not? The value 101 is not a string, it’s an integer number! You can’t assign it to name, because that constant has type String. You can only assign strings to a constant with type String.

You can work with lots of basic variable types in Swift, such as:

In iOS development, with the Cocoa Touch SDK, you can also work with many more types, like:

Swift has many kinds of types, such as classes, structs, enums, protocols, extensions, generics and optionals. Each of these components have different attributes, syntax and properties, and you can use them to structure your code in different ways.

Wait, what? Swift has different kinds of types!? Yup! A closure type like (Int) -> Void is different than a simple primitive type, like Int. They’re both types, though! The Int type is a struct. A struct (or “structure”) is a flexible construct (or building block) for your code. We’ve got lots of other building blocks in Swift, and they help us organize our code in the right way. Don’t worry about it right now, all will become clear in time.

In the previous chapters we’ve explicitly declared the type of variables, but you’re not required to do that. Swift can infer the type of a variable on its own, based on the context of your code.

Here’s an example of an explicit type annotation:

The above code has an explicit type annotation ···:Int. However, you can also just write this:

Because the type of 0 is Int, Swift has figured out – inferred – on its own that score has type Int too. Neat!

A common mistake of beginner app developers is that they assume that score must have no type. Don’t make the same mistake! Practice with understanding the types of your variables, even when they’re inferred.

Type inference is super useful, because it makes you more productive and often makes your code easier to read. You simply don’t have to write so many types explicitly, which saves time.

Another advantage is that the Swift compiler, i.e. the program that turns your Swift code into ones and zeroes, can optimize the types of your variables without the need to explicitly change them.

For instance, when the Swift compiler recognizes that you are only working with positive integers, it could hypothetically change the type of your variable from Int to UInt and potentially save some memory.

What is the type of value? We’re adding an integer to a decimal-point value, i.e. an Int and a Double. When the type of value is inferred to Int, you’d lose the fraction, so Swift will infer value to be of type Double.

Type inference works for all types, so also for functions that return a value, expressions, or for closures. It’s exceptionally helpful for coding closures clearly!

Want to know the type of an inferred variable or constant? In Xcode’s code editor, hold down the Option key while clicking on a variable. A gizmo pops up, providing you with the type of the variable. 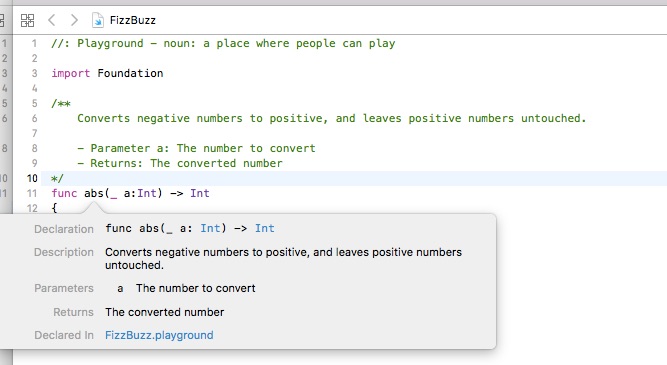 In a large codebase, i.e. above ~ 15.000 lines of code, type inference can increase the time it takes to compile your app. Swift occasionally chokes on trying to infer a type, too. When that happens, it can helps to declare some types explicitly with a type annotation.

You can also use the type(of:) function, which tells you the type of the value at runtime. Like this:

Awesome! Now you know how to use var and let to declare variables and constants. You also learned what we use variables for, and how type inference works. Oh, and we talked about types too!