Working with Recursive Algorithms in Swift

Written by LearnAppMaking on January 5 2021 in App Development, Swift 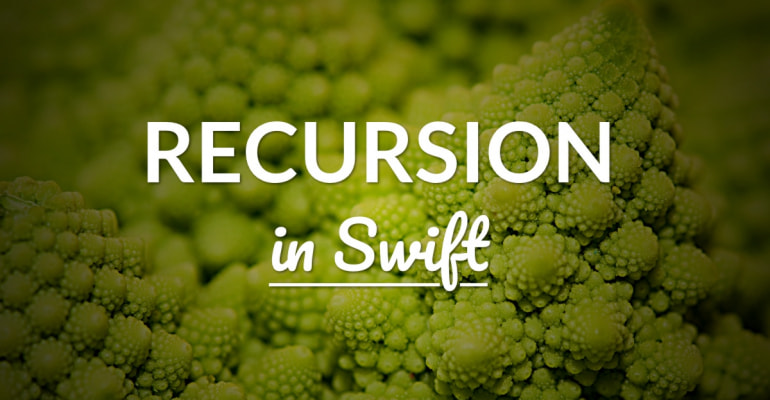 A recursive function is a function that calls itself. It’s an intriguing approach to solve specific coding challenges. In this tutorial, you’ll learn how to work with recursion in Swift.

The word recursion means “a repeated application of a recursive procedure or definition” – and that’s a recursion itself! In essence, a recursion happens when a thing is defined in terms of itself or its type. And in Swift, recursion means that a function calls itself!

How does the sum(_:) function work? Here’s how:

The head of an array is its first item. The tail of a sequence, is the array minus its head – so the remaining items. Think of it like a snake!

Let’s dive into the syntax some more. First, the return statement:

Then, the numbers.dropFirst() call will return a subsequence of a the numbers array without the first item, hence “drop first”. We’re providing that subsequence to the Array() initializer, so we’ll turn the subsequence into an array again. This array is then provided to the sum(_:) function, as its only parameter.

There’s more than one way to skin a cat – in programming too! It might have been simpler to use a for loop to create a sum of integers, but that’s not the point here. As you’ll soon see, recursion sometimes elegantly solves a programming problem that other approaches cannot.

Recursion: Does It Ever End!?

If you don’t terminate a recursive loop, you’ll easily create what’s known as an infinite loop. The recursion never stops, and keeps looping forever. And that isn’t very useful, right?

In sum(_:) function, the following block of Swift code will stop the recursion:

When the input array is empty, the guard statement invokes its else clause and returns 0. This early return will prevent the function from calling itself in the subsequent line of code (see example), and stops the recursion as a result.

Every recursive function needs a way to escape the iteration. In the sum(_:) function, it’s logical to terminate the recursion when the numbers array is empty. After all, when it’s empty, there aren’t any more numbers to add, so we return 0. This prevents another, deeper sum(_:) call.

The last recursive function call to sum(_:) will be an empty array, because we’re calling dropFirst() and the before-last array has only one item. That last function call needs to return a value, because it’s added to the sum, so we return 0. But most importantly, we prevent sum(_:) from being called again, and break the recursion.

The Beauty Of Recursion

You might wonder: “Why use recursion at all?” After all, we could have easily calculated the sum of an array of integers like this:

This way of getting the sum of an array is simpler, easier to read, and about as elegant. What do you need recursion for?

As it turns out, there are specific problems in mathematics and programming that are easier to solve with recursion. Consider, for example, that you need to measure all branches of a tree, but you don’t know how many sub-branches each branch has.

Likewise, a search algorithm called binary search uses a simple approach to find an item in a sorted array. With each recursive pass, the array is cut in half, because the algorithm has figured out in which of the two halves the to-be-found item is.

And of course, you can use recursion for the sheer fun and beauty of it. Here, check out this recursive function to calculate any n-th Fibonacci number.

The Fibonacci numbers are a sequence in which any number is the sum of the two preceding numbers. The sequence starts at 1, 1 (or 0, 1), so the first few numbers are:

You can clearly see that the fifth number 5 is the result of 2 + 3, and 13 is the result of 8 + 5. We could create an intricate for in loop with several temporary values, but it’s much easier to comprehensively describe the Fibonacci sequence by using recursion.

Differently said, add the previous Fibonacci number and the Fibonacci number before that, and return the result. You can see how this spirals into more recursion, because the subsequent fibonacci(_:) calls will start looking for earlier Fibonacci numbers to get to the end result.

Speaking of the end, that happens when we reach this bit of code:

We’re ending the recursion by not making a subsequent call to the recursive function, just as with sum(_:). By returning early, the fibonacci(_:) functions aren’t called again. And when does that happen? For the first two Fibonacci sequence numbers, 1 and 2, for which the result is 1. Neat!

Recursion in Swift. A function that calls itself. Now you know! It’s a useful, fun approach to looping over data, and to solve challenges. Why don’t you see if you can put it to use in your next iOS project or Swift challenge?