Play With Code: Palindromes In Swift

Written by LearnAppMaking on February 2 2020 in App Development, Play With Code, Swift 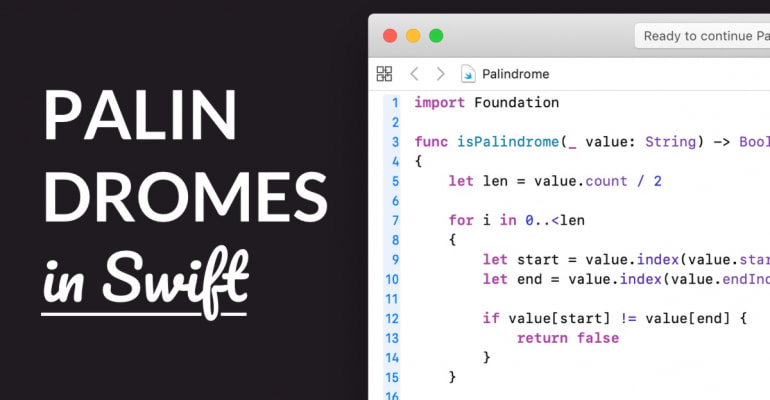 The date 02-02-2020 is a palindrome. Palindromes are words that read the same forward as backward. And they’re great fun to play with in Swift! In this tutorial, we’ll discuss and code 3 approaches to check if a string is a palindrome in Swift.

A palindrome is a word, number, phrase or other sequence that reads the same forward as it reads backward. A few examples:

A palindrome is a nerdy word joke!

If you look closely, you’ll see that you can essentially “flip” or rotate a palindrome around its middle. What’s on the left of the middle, is also on the right. It doesn’t matter if the number of characters is even or odd. And as we can see in the examples above, palindromes can also include punctuation.

You can get pretty crazy with palindromes. For example, a Lychrel number is an integer number that cannot form a palindrome after repeated reversal and addition of its digits. Take 56, which becomes palindromic after one iteration: 56 + 65 = 121.

And as you’ve guessed, palindromes are a prime subject for playing around with strings in Swift!

We’re going to figure out if a given string is a palindrome, by using Swift programming. Before we write some code, we’ll have to agree on a strategy or algorithm.

Here’s one such algorithm:

With this algorithm, we’re essentially “walking” the characters from both the start and the end of the string. You compare them against each other, and when every character pair is equal, the string is a palindrome.

Let’s code that in Swift. We’ll start by defining the function isPalindrome(_:). Like this:

In the above code, we’ve defined a function named isPalindrome(_:). It has one unnamed parameter value of type String. The function returns a Bool value, either true or false. We’re going to check if value is a palindrome, and return true if it is, and false if it’s not.

Next up, we’re adding the following code to the function:

This is a for loop. Here’s how it works:

The above code also uses a trick. What happens when the length of the string is an odd number, like 7? In that case, len will be 3. The code value.count / 2 is essentially 7 / 2, which is 3.5, but since both 7 and 3 are integers, the resulting type of len is an integer too. You can’t assign a decimal value, like 3.5, to an integer. As a result, the fraction of the decimal value is “chopped off”, and we end up with 3.

OK, next up. We’ll need to get the characters at the start and end of the input string. Add the following code inside the loop:

In Swift, string indices are complicated. First, we’ll need to work with an index to get a character from a string. Integers as indices won’t work. For now, let’s assume that start and end correspond to the first and last positions in the string.

Then, add the following code in the for loop:

Finally, at the end of the function, outside the for loop, add this code:

Why do we need that? When the for loop has walked all the characters in the string, we’ve proved that they are all equal (not not equal), so the string is a palindrome! We return true.

Does it work? Let’s find out!

Let’s continue with another approach. Instead of using a for loop, we’ll recursively iterate the string. We’ll take smaller and smaller pieces of the string, continually checking if the first and last characters are the same.

First, note that the function is essentially the same as the previous one. We’ve got one input value, and we’re either returning true or false. The principle of the function remains the same too: compare the first character of the input string against the last.

Recursion happens when a function calls itself. You can see that happening inside the if statement in the above code. We’re calling the isPalindrome(_:) function from within itself. As a result, the function repeats itself, and loops over the given values.

The if value[value.startIndex] == value[end] code is similar to what we had before. When the first and last characters are equal, continue execution. When they’re not equal, return false, in the else block.

Until when? That’s where this block of code comes in:

The guard statement will check if value.count is bigger than or equal to 2, and if it isn’t, the function will return true. Differently said, when the length of value is 1 or 2, the function returns true.

Why are let end ... and let start ... so oddly placed? That’s because of value[start..<end]. The value.endIndex corresponds to the after last index, i.e. the character after the last character in the string. The end index thus corresponds to the actual last character in the string. We need this in the if statement’s logic, so let end ... is placed outside of it. Inside the if block, we’re using the range start..<end to create a substring starting at start, up to end, but not including. In other words, let end ... is placed outside the if statement because we need it twice, whereas let start ... is placed inside the if block because we only need it in there.

Palindrome 3: This One Trick…

Based on this, we can assert that a string is a palindrome if both halves of the string are equal to each other, in reverse. Like this:

And that, dear coder, is why the simplest algorithm to check if a given string is a palindrome is…

A string is a palindrome if it’s equal to the same string in reverse. Awesome!

By the way, while we’re at it, you may have noticed that many palindromes are sentences, riddles, etc. Since string equality in Swift is strict, i.e. it includes punctuation too, we’ll need something to sanitize one such riddle if we want to run it through our isPalindrome(_:) function.

Here’s how you do that:

The sanitize(_:) function will take a value string as input, and returns the same string as lowercase, with any character but lowercase A to Z removed. It uses regular expressions to replace characters in the string.

And there you have it: palindromes. We’ve discussed 3 approaches to check if a given string is a palindrome, and we’ve touched on many Swift syntaxes and topics in between.

The big question of course, is when the next 02-02-2020 palindromic date occurs…

How To Find Strings with Regular Expressions in Swift