Home » App Development » Working With JSON In Swift With SwiftyJSON

Working With JSON In Swift With SwiftyJSON

Written by LearnAppMaking on January 30 2019 in App Development, iOS 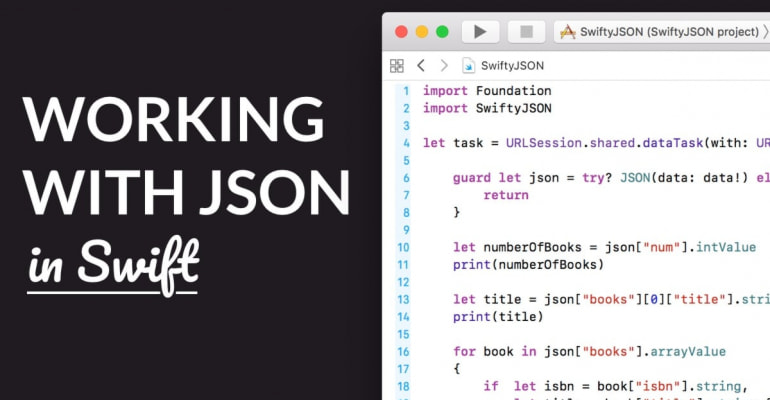 Working with JSON can be cumbersome, but not if it’s up to SwiftyJSON! In this tutorial, you’ll learn how to work with JSON data in Swift with the SwiftyJSON library.

Before we get started, let’s briefly discuss what JSON (“jay-son”) is. JSON stands for JavaScript Object Notation, and it’s a standardized file format that’s used to transmit data objects consisting of key-value pairs.

The data format is easily read by humans, which is convenient. You typically use JSON for async communication between clients and servers, such as an app and a webservice. For example, Twitter’s REST API outputs data as JSON.

Here’s an example of JSON:

A special value null denotes an empty value, much like nil in Swift. And you can of course include empty strings, 0, empty arrays [] and objects {}.

It’s common to “prettify” JSON to make it easier to read, by using indentation and newlines, as seen in the example above. A JSON parser doesn’t care about those niceties, so you might as well write everything on one line.

If the structure of the JSON is broken, i.e. a } is missing, the entire JSON cannot be parsed. When you try to load the JSON in Swift, you’re likely to see an error message.

JSON has a number of sensible supersets and implementations, such as YAML, JSON-LD, MessagePack, and JSONP. When debugging JSON, it can be helpful to use an online validation and formatting tool, such as json.parser.online.fr.

Technically, any value that’s serializable can be transformed or used in JSON. This includes base64 strings, numbers, objects, custom classes and structs, and so on. If you’re looking to use well-structured objects with JSON, i.e. individual books as opposed to networking responses, check out this tutorial about Codable: Working With JSON And Codable In Swift.

In practical iOS development, it’s common to use JSON together with webservices. APIs from Twitter, Facebook, Parse Server and even databases like MongoDB and Elasticsearch all use JSON to transmit data.

In Swift, you typically use a component called JSONSerializer to turn JSON into Swift objects and arrays. You can also use a fantastic 3rd-party library to make dealing with JSON easier, called SwiftyJSON. Before we find out how SwiftyJSON is different from JSONSerializer, let’s get into how you can use SwiftyJSON to work with JSON data.

Here’s an excerpt of the data that we’re going to work with:

Important: You can view the complete JSON data here.

Imagine we’ve just made a network request to a book library API, and received a response with the above JSON data. How can we get to the relevant bits and pieces, using SwiftyJSON?

The above line of code parses the JSON data from a Data object called jsonData. It also converts errors to optionals with try?. If any errors occur while parsing the JSON, the constant json will be nil.

You can use a great number of JSON initializers to create a JSON object, including working with strings, Data objects, and other values. You can also use the JSON(...) initializer to construct a JSON object from a dictionary or array.

Here’s an example that shows how you can use SwiftyJSON to read JSON data:

Here’s what happens in the code:

The above line gets the title of the first book in the "books" array, using index 0, and assigns it to title. It’s then printed out.

What’s great about working with JSON this way, is that you can chain together JSON branches concisely. And every invididual branch is a full JSON object itself, that can be traversed further.

Let’s see if we can print the ISBN number for each of the 3 books in the JSON data. This will get interesting, because only 2 of 3 books have an ISBN number. How are we going to deal with that?

And this is the output:

It’s important to note here that we’re using the .string properties on the JSON objects, and not their .stringValue counterparts. There’s a distinct difference between the two, as you’ll find out in the next section…

JSON typically doesn’t have any rules that tell you how data is structured. It just has JSON syntax for objects, arrays and values – and that’s it. That means that most JSON data is unstructured and that we’ll have to traverse the JSON to get to the data we want.

If you use the JSONSerialization class to parse JSON, you’ll have to do an awful lot of checking for nil and optional casting to expected values with as?. This makes your code unneccesarily verbose and hard to read.

SwiftyJSON deals with this problem in 3 ways:

Let’s take a look at another example.

If you look carefully in the JSON data, you’ll see that the "dewey" key for the first book has a double type, and that it has a string type for the third book. Oh my, the JSON is terribly unstructured!

When we try to get the Dewey Decimal System values for the books, we run into trouble:

Fun Fact: The Dewey Decimal System is a numbers system that’s used to locate physical books in a library. It organizes books by theme and category, so you can quickly walk over to a section or cabinet that has a book you want.

The problem here is that we’re accessing this value with .string. This will return nil when the value has a different type, and thus won’t print out the value of "dewey" for Nineteen Eighty-Four.

At this point we can choose to solve this problem in a number of ways:

A fourth option exists, although it has issues of its own. Here’s how:

The above code uses the .rawValue property, of type Any, to just get whatever value book["dewey"] is. We can then use the String(describing:) initializer to turn this object into a string. Many Swift data types have failable initializers that can deal with different input values, for example to convert from Int to String and vice-versa.

This results in the following output:

This goes to show that SwiftyJSON will go to great lengths to provide failable values with nil, or to provide sensible defaults. As a developer, you have the opportunity to explicitly ask for the types of data you expect. And it takes a lot less code than JSONSerializer!

With a little bit of practice, you can use those JSON objects as if they’re ordinary arrays, dictionaries, or… well, whatever the heck is in your JSON!

Working with Codable and JSON in Swift