Inheritance and Subclassing Explained in Swift

Written by LearnAppMaking on February 3 2021 in App Development, Swift 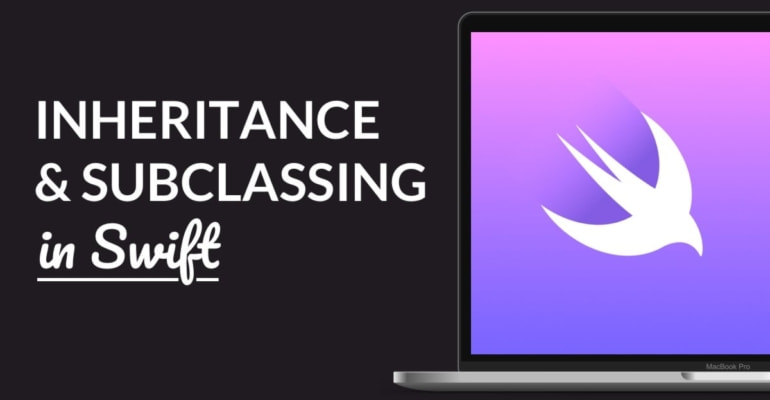 With subclassing, a class can inherit functions and properties from another class. That allows you to reuse your code, which is a good thing. In this tutorial, we’ll discuss how you can use subclassing and inheritance in Swift.

Inheritance in Swift means that one class inherits the functions and properties of another class. You do this by subclassing.

Just like you’ve inherited genes from your mother, and even grandfather, Swift classes can inherit things from a superclass.

In the above code, we’ve defined a class called Vehicle. It has one property speed of type Int with a default value of zero. The class also has a function describe(), which prints out some text.

Here’s how we can use that Vehicle class:

So far so good! It’s an instance of Vehicle, assigned to rocket, and we adjust the speed property and call the describe() function.

Let’s create a subclass next:

In the above code, we’ve created a Bike class. It subclasses the Vehicle class. You can see that based on the class subclass: superclass { ··· syntax in the class definition.

There’s a hierarchy going on here:

The Bike class has now inherited all functions and properties of the Vehicle class. It’s also added a property of its own, color of type String. This color property is only available on instances of the Bike class.

In the above code, we’ve created an instance of the Bike class. You can see that we’re setting the speed property to 15 km/h, for example. This speed property is inherited from Vehicle. The same goes for the describe() function. That’s what subclassing is all about!

You can only subclass one superclass, so one class cannot inherit from more than one superclass. However, you can subclass further “down”. Check this out:

A hierarchy has formed: Vehicle → Bike → Unicycle. As such, we can say that a Unicycle is a Bike is a Vehicle. You can even test this relationship with the “is” keyword in Swift. Like this:

One of the main reasons for using inheritance, is that you want to reuse some of the existing code in a class, and replace some other parts of it. Instead of repeating code that already exists, you reuse some of it.

But what if you want to change what’s already there? That’s where overriding comes in. Check this out:

In the above code, we’ve overriden the describe() function. This effectively replaces the function with a new implementation.

You need to do 2 things to override a function:

If we run the same code we had before, you’ll see that the result is different:

The new implementation of the describe() function now uses the color property of Bike, because we’ve overriden it. Neat!

What if you need to access the “previous” implementation of the function you’re overriding; the one from the superclass? You can access that function by using the super keyword. Here’s an example:

In the above code, the overridden describe() function in the Bike class prepends its return value with the color of the bike. As such, the output for any red bike is something like “red bike moving at 15 km/h”.

If you’re overriding a property’s getters and setters, you can access the property’s superclass value with super.property. More on that, below!

Why You Can’t Override Properties

Can you also override properties? Yes and no. Check this out:

In the above code, we’re attempting to override the speed property in the Bike subclass, by changing its type from Int to Double. This won’t work! Why not?

First off, by overriding you can only provide a custom implementation. You can provide your own “contents” of the function or property, but you cannot change its definition. You can’t change function’s or property’s types and/or parameters.

There’s a second reason. Remember when we discussed that a Unicycle is a Bike is a Vehicle? As such, we can provide an instance of type Unicycle when a type of Vehicle is required, because they’re related. Check this out:

This function calculates how much time it would take for a vehicle to travel a given distance. See the function’s parameters? We’ve got one of type Vehicle, and another one for distance.

Here’s how you’d use it:

So far, everything works. The function duration(for:distance:) depends on the speed and distance values to be of type Int, because that’s what makes the distance / speed computation work OK. Both have the same type.

It’s also worth noting here that it’s OK to provide an instance of type Bike for a parameter whose type is Vehicle. That’s because Bike subclasses Vehicle, so we can logically assume that “a Bike is a Vehicle”.

What happens when you override the speed property, like we did before?

Suddenly, the computation distance / vehicle.speed changes types: Int divided by Double. That doesn’t work! The division operator / clearly states that it needs to divide 2 values of the same type.

It could have worked, of course, by converting from Int to Double. But that’s beyond the point! The key in overriding is that you cannot change the types in the code that depends on the property or function to work.

If you change a input or output type, and some other code down the line depends on that, you’re guaranteed to introduce bugs into the codebase. That’s why, by design, you cannot override properties or change a function’s parameters or return type.

What can you override, though? Well, because the principle states that you can override an implementation, you can change a property’s observers, getters and setters.

Just as before, we’ve used the override keyword to indicate that we’re overriding the implementation of the property. You’ll also need to keep the name of the property, and it’s type, exactly the same.

You can override a superclass’s properties, and more specifically, the willSet and didSet property observers, as well as the get and set getters and setters. Just as with functions, you can use super to access the property’s value on the superclass. You can learn more about those in this tutorial: Properties in Swift Explained

When to Use Inheritance?

When should you use inheritance? We’ve already touched upon it a bit, and the main reason for using inheritance is code reuse.

Say you’re actually building an app that involves vehicles, cars, bikes, unicycles, motorcycles, and so on. Those things clearly have a relationship between them, so it makes sense to create a hierarchy. Something like this:

You can imagine that a RaceCar and FamilyCar share characteristics that they’ve inherited from Car. And a Unicycle and a RaceCar have a few things in common, because they’re both vehicles.

However, there’s a probable chance that your next app will involve buttons, text fields or table view cells, and not cars and unicycles. When do you use inheritance and subclassing in real-world app development!?

A common use case is the view controller. In fact, every time you’re putting a view controller on screen, you’re subclassing the existing UIViewController class! That’s the only way it works.

With view controllers, you’re inheriting the functionality of a view controller. You also provide your own implementation for viewDidLoad(), and you add on multiple properties, functions, and so on.

The UIKit framework knows how to put a view controller on screen, and invokes your overridden viewDidLoad() function when necessary – which puts your User Interface on screen. Neat!

(Also, you cannot subclass with structs.)

Take a modern framework like SwiftUI, for example. If you’re building User Interfaces (UIs) with SwiftUI, you don’t have to subclass anything. You’re composing views from pre-existing UI components, like VStack and Text.

SwiftUI does this in a remarkable way, which involves 3 alternatives to subclassing:

In general, we can say that subclassing makes your code more rigid. In some cases, like with view controllers, a RoundedButton, or cars/unicycles, that’s exactly what you need. In other scenarios, composability and flexibility is what you need; it enables you to reuse code without creating rigid relationships between them. Awesome!

Inheritance is a logical answer to the question: “How can I be more lazy as a coder?” And in this case, laziness is good! When you reuse more code, you have to write less code, and that translates to easier to maintain, extend and fix. That’s not the whole story, of course. In this tutorial, we’ve discussed how, when and why it’s smart to use inheritance and subclassing in your Swift code.

Here’s what we got into:

Fun with print() in Swift