Written by LearnAppMaking on March 4 2021 in App Development, Swift 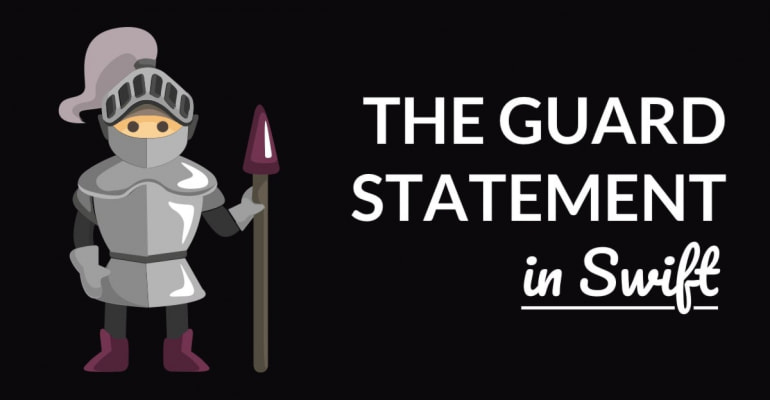 The guard statement in Swift helps you return your functions early, if a condition isn’t satisfied. In this tutorial we’ll discuss what guard is, and how you can use it in practical iOS development.

How To Use “guard” in Swift

You use the guard statement in Swift to (early) return a function when a condition isn’t satisfied. It’s similar to an if statement.

You can’t calculate the square root of a negative number†, so the sqrt(number:) function checks that number is greater than or equal to 0 by using the guard statement.

Here’s that guard statement once more:

The syntax for guard in Swift is guard condition else { ··· }.

It’s easiest to compare guard to a conditional, i.e. an if statement, that evaluates a logical expression.

In the above code, we’re checking if number >= 0. If it’s not, i.e. number is negative, the else clause of the guard block is invoked. This will return nil to the caller of the function, and the function exits.

It’s easiest to read the above code as: “Guard that number is greater than or equal to zero, or else_, return nil.”_ See how that reads quite naturally?

If you look closely, you’ll notice that the guard statement is the opposite of an if statement. This doesn’t do guard justice, but it’s important to point out. Here, take a look at this:

See how these guard and the if statements have the same effect? The else clause of the guard statement is invoked when number >= 0 evaluates to false.

The guard statement can only be used to “transfer program control out of scope”. This is a fancy way of saying that the body of the guard block, i.e. what’s inside the squiggly brackets, needs to exit the function (or loop).

You can do so with the following statements:

It’s worth noting here that, next to using guard in functions and closures, you can also use it in loops, like with for in.

In the above code we’re using the guard statement to check that an integer i is even, i.e. a multiple of 2. If it’s not, the continue statement causes the loop to continue to the next iteration.

Thanks to that bit of wizardry we can “guard” or “make sure” that a condition is met. And if it’s not, we can respond with exiting the scope.

†: In mathematics, no negative number can have a real square root.

Is inverting if statements all there is to the guard statement? If it would be, we just might as well use if statements!

Here’s what the official Swift documentation says about guard:

A guard statement is used to transfer program control out of a scope if one or more conditions aren’t met.

What it means is that you use guard to exit a function (“transfer control out of scope”) when a condition isn’t satisfied; when it’s not true. For example, when the input for sqrt(number:) is negative and number >= 0 evaluates to false.

When you already know that it doesn’t make sense to continue executing a function, you might as well exit the function early. This principle is called early return (or early escape or exit).

It’s called “early” because you typically exit at the top of the function, when the computationally intense stuff hasn’t happened yet. If you’re not going to like the movie, why watch it all the way to the end?

Early returns are useful for a few reasons:

But… you could say the same about using if for an early return, right? What makes guard superior syntax for early returns?

The guard statement is technically only syntactic sugar, i.e. it merely sugarcoats already existing control flow mechanisms with more expressive syntax. Syntactic sugar is a good thing – if it wouldn’t be, we would all still use punch cards!

The guard statement has another use case. You can combine optional binding, i.e. if let, with guard.

In the above example we’re using guard let to do 3 things:

Let’s disect that statement for a bit. First, imagine your app attempts to authenticate a user with a username and a password. The view controller has a text field property called usernameField of type UITextField? (an optional).

Both usernameField and its text property are optionals, so we’ll need to unwrap the optional to get to the value. A great approach is to use if let, like this:

In the above code, we can safely use the username constant, inside the brackets, to authenticate the user. Thanks to if let we are 100% certain that the conditional body is only executed if usernameField?.text has a value.

Now, consider that we want to exit the function if usernameField?.text does not have a value – so when it’s nil. How can we do that?

In the above code we’re throwing an error if usernameField?.text is nil, so we can respond to it having a value or it being nil.

This code has a few problems, though:

How do you solve this? Here’s how:

What’s counter-intuitive – and super cool – about guard let is that the username constant is available within the scope of the function, and not just the conditional body. You can use username “outside” of the squiggly brackets of the guard let ··· else { ··· } block. Neat!

If you’re already familiar with software development, you’re hopefully also familiar with the concept of early returns. It’s a good practice to exit a function or scope as soon as possible, if it becomes apparent that continuing execution makes no sense. Go home if movie sucks.

In practical iOS development, you’ll often see the guard statement as a one-liner. Here’s an example:

In the above code, the failable initializer Int() is used to convert the string age to a constant with the same name of type Int. The guard statement is written on one line, which doesn’t affect its functionality (whitespace never does) and makes it much more pleasant to write.

Author’s Note: I recall a discussion on the Swift message boards about omitting the squiggly brackets, or even making else { return } implicit, but I can’t find it anymore… If doing so is useful, you can surely read about it on Swift Evolution. I wonder if we’ll see implicit guard let age = Int(age) in a future version of Swift.

Moving on. You’re likely to come across something like the following, in your iOS development work:

See what’s happening there? The guard block is used to validate four conditions:

Just to be clear: it’s perfectly fine to check for these scenarios. It doesn’t make sense to attempt to authenticate the user if the password is empty or if the usernameField outlet property somehow is nil.

What’s annoying about this guard block, is that it can become spaghettiful (unclear) quickly. Just as with if let, it’s tempting to create a “pyramid of if let”, combining lots of conditionals and optional unwrapping, separated by commas.

Depending on your programming style, you can split up the above blocks in a few ways. First, it’s a good idea to separate the unwrapping with if let and the “simple” checks for isEmpty. Like this:

In the above code, we’re even forgoing the guard statement in favor of a more descriptive if statement. It reads more naturally to say: “If username or password is empty”, compared to: “Guard that username not is empty, and password not is empty.” This is up for debate though. If you don’t agree, at least use it as an example to sharpen your thinking.

Quick Note: Using comma’s in if statements is not exactly the same as “AND” &&, but it’s similar. Comma-separated clauses are executed in order, and not continued if a preceding clause evaluates to false. Keep in mind that the order of precedence of , and && is not the same. See SE-099.

The guard and guard let statements make your code easier to read, safer, and less error-prone. You can code more productively, knowing that guard statements check a condition and exit if it’s invalid.

If you look closer, you see the tension between designing a programming language that’s convenient for the developer without making it too strict and opinionated. That’s the role of syntactic sugar – making you more productive, and your code more flexible, without getting too much in the way.

In any case, here’s what you learned: