Written by LearnAppMaking on August 6 2020 in App Development, Swift 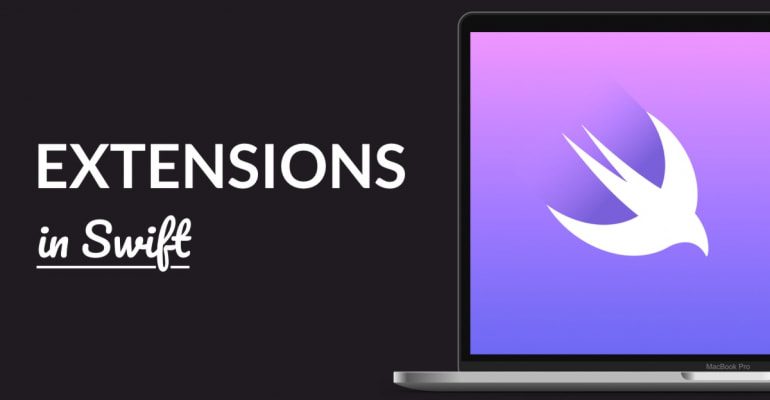 Extensions in Swift are super powerful, because they help you organize your code better. You use an extension to add new functionality to an existing class. And they’re especially useful if you don’t have access to the original code of that class!

Let’s look at an example. Imagine that another developer has defined a class in their code, and you don’t have access to that code. Something like this:

That other developer decided to measure the airplane’s altitude in feet, but you want to set it in meters. You can’t edit their code, and you don’t want to subclass Airplane, so you create a Swift extension instead.

You can now use the setAltitude(meter:) function on an instance of class Airplane as an ordinary function, like this:

So, what’s really going on here? When your Swift code compiles, any extensions you’ve defined are added to their respective classes. The original class and its extensions are essentially merged into one. As a result, you can extend a class with new functionality, such as functions.

Here’s what extensions can do in Swift:

Extensions can’t change the fundamental structure of a class (or other type). They can only add functionality, not replace it. As such, you can’t add new properties to an existing type.

Continuing with the previous example, you can’t do this:

What’s so interesting about extensions is that you can use them to your advantage, to organize your code better. Let’s take a look at these practical use cases for extensions:

Separating and Grouping Code with Extensions

A powerful way to use extensions is separating and grouping different parts of a class. You use a base class for the fundamental code of the class, such as its properties, and then add on functions by using extensions.

Then, we define different extensions. First, one for flying the plane:

Then, we define functions for take-off and landing:

Each extension can have its own Swift file. When you organize a class based on its functionality, and don’t put it all in one file, you can have greater control over where you put what code.

The example with the Airplane is of course trivial, but you can imagine that breaking up components in extensions can help you organize a larger code base better. The key is to think about how to organize your code. An approach to start with, would be organizing your code by functionality.

You can use extensions to conform to a protocol. Like this:

In the above code, because of the extension, the class DetailViewController now conforms to the CLLocationManagerDelegate delegate protocol. You can then proceed to add the code for that delegate into the extension, separating it from the base class.

When a class conforms to multiple protocols, its class declaration can get messy quickly. And you end up with a huge class, which is generally a bad thing.

Just as with the previous example, you can break up and group a classes code by putting the functionality of each protocol into its own extension. The extension makes the base class adopt a protocol, and you add protocol-specific code to the extension.

Always keep in mind though that extensions shouldn’t be an excuse to skimp on proper app architecture. A huge class separated in 10 extensions is still a huge class, no matter how you slice it.

You can’t add properties to an extension, but you can add static constants and subtypes to extensions. And that lets you do some Swift magic!

You can do a similar thing with subtypes. You can define a subtype in an extension, like this:

And you can use that as follows:

This has two benefits:

Swift is a super useful programming language, but sometimes it just doesn’t have what you need.

Consider for instance that prior to Swift 4.2, arrays had no simple shuffled() function to randomize arrays. It’s lunacy to subclass arrays just to be able to randomize them, so you resort to using a global helper function.

What if you could add that helper function directly to the Array type? Like this:

The above code merely adds a shuffled() function to the Array type. As a result, that function is available on any array. Neat!

The above code first declares a Circle class, and then adds a circumference computed property with an extension. When a computed property is accessed (see below), the code within the squiggly brackets is executed and a value is returned.

And calculate the circumference of a circle like this:

Again, a trivial example, but imagine you don’t have access to the source code of the original Circle class, or that you want to organize its functionality better.

You can constrain an extension to a specific type or protocol by using the where keyword. Learn more here: How to Use “where” in Swift

The last approach we’ll discuss is using protocol extension. Unlike protocol conformance (see above), protocol extensions let you directly extend a protocol. What’s really mind-boggling is that you can provide default implementations of protocols by using extensions.

The Edible protocol defines a function eat(), so any class that wants to conform to the protocol needs to implement the eat() function. Something like this:

So far so good! With protocol extensions, you can now extend the protocol to include a default implementation. Like this:

Note that the above code extends the protocol type Edible, and not the Fish class. Because of that protocol extension, any class that adopts the Edible protocol can now use the default implementation of eat(). Like this:

See how we’re calling the eat() function on apple, even though the Apple class does not provide an implementation? That’s because of the default implementation from the protocol extension. Awesome!

Extensions increase the composability of your code, they let you add functionality to classes you can’t change, and help you organize your code better. And they’re downright awesome!

Inheritance and Subclassing Explained in Swift