Written by LearnAppMaking on January 27 2021 in App Development, Swift 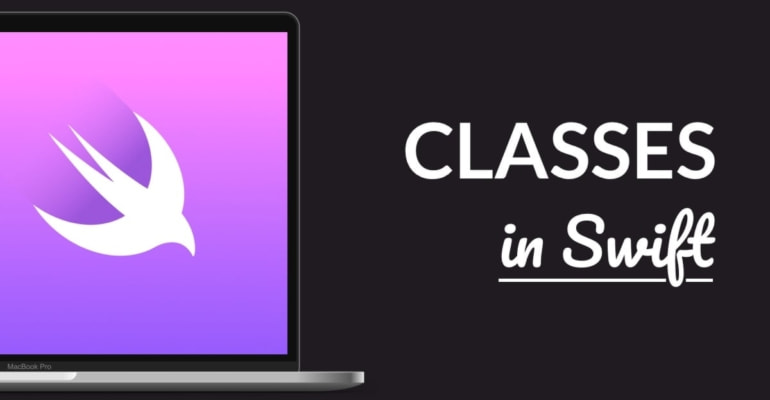 Classes are one of the most fundamental building blocks of Swift code. In this tutorial, we’re going to discuss how classes work, what instances are, how inheritance works, and much more.

What’s a Class in Swift?

Classes are the building blocks of your app. You use them to structure and organize your code. You typically use classes for complex data, and structs for simple ones.

Let’s say we’re building an app you can use to draw something. One of the classes we’re including in the app is Circle. Like this:

This class Circle has 2 properties:

You can imagine that this Circle class can be used to draw a circle of a given radius and color on screen, in a drawing app. In fact, we can also add a function to Circle to calculate its circumference. Like this:

A function is a self-contained block of code that performs an operation, like calculating the circumference of a circle. Functions can also return a value to whoever called the function. You can take the value that the circumference() function returns, and pass that value around in your code.

See how we’re organizing the code that belongs to a circle, in the Circle class? That’s what classes are all about. You can organize components in your code, ranging from Invoice to Tweet to DatabaseController, and that helps you to create code that’s easy to reuse, maintain and extend.

Working with classes in Swift has 2 important aspects: the class and the instance. So far, we’ve created a class called Circle. Like this:

Instances of a class are often simply called “object”. You got the class and the object, and the object is an instance of the class. Jargon like that often gets in the way of communication, but when learning about coding, it’s often smart to know the appropriate terminology.

If you want to use this class in your code, you’ll have to create an instance of the class. It’s like making a copy of it, but different. Check this out:

In the above code, we’ve created an instance of the Circle class by using the Circle() initializer. This instance is assigned to a constant called sun.

On the second line of the above code, we’re assigning a number to the radius property of the sun instance. And on the third line, we’re printing out the output of the circumference() function.

What’s the difference between the class and an instance? Let’s take a look at a metaphor:

As with any blueprints, you can build an unlimited number of houses based on it. This is no different with classes and instances, and that’s the power of classes: you define them once, and reuse them everywhere.

In the above code, we’re reusing the Circle class to calculate the circumference of an array with arbitrary radii. This is exactly what programming is about! How can you be as lazy as possible by creating and reusing code?

The concept of classes belongs to an overarching concept called Object-Oriented Programming (OOP). Within this category, you can learn more about structs, functions, properties, inheritance, protocols, and much more.

Classes have an essential characteristic, that structs don’t have. A class can subclass another class, and inherit the properties and functions of that class. Subclassing allows you to reuse components in your code, while customizing their functions by overriding them.

Take a look at the following class:

In the above code, we’ve defined a class called Tweet. It has one property text of type String, and a function show() that prints out the value of text.

You can see that MediaTweet is a subclass of Tweet because its syntax is class subclass : superclass. The MediaTweet has now inherited all properties and functions of the Tweet class, and has also added a property of its own: image of type String.

Here’s how you’d use the MediaTweet class:

When we run the tweet.show() function again, its output is now:

Before we call it quits, let’s discuss one important principle in working with inheritance. When you subclass a class, you can use that subclass in places where the superclass is required. Here, check this out:

In the above code, we’ve created an instance of MediaTweet and assigned it to the tweet constant. Just as before, we’re changing the text and image properties to a meaningful value.

In the second part of the code, we’re creating a function upload(tweet:). This function accepts one parameter of type Tweet. Inside the function, the data of the tweet is “uploaded” and printed out.

Finally, on the last line, we’re calling the upload(tweet:) function with an argument tweet, i.e. the function is called and the MediaTweet object is provided as input.

What’s so special about this? Take a look at the signature of the upload(tweet:) function. It accepts a parameter of type Tweet, but we’re providing it with another type: MediaTweet. The types don’t seem to match! Why is this valid code?

We can even test this hierarchy with the “is” keyword. Like this:

Why is this an important principle to understand? In practical iOS development, you’ll come across many scenarios where you can provide a subclass of a class as a value, whose required type is the superclass you’re subclassing.

This substitution of a subclass for a superclass is formally described as the Liskov substitution principle, which is part of the SOLID principles. It has crucial consequences in coding, for example, that you cannot change the return type of a function you’re overriding. You also cannot change properties in a subclass, but you can override their getter and setter.

Awesome! We’ve discussed classes in this tutorial. Here’s what you learned:

Working with Timers in Swift