Struct vs. Class in Swift Explained

Written by LearnAppMaking on January 21 2021 in App Development, Swift 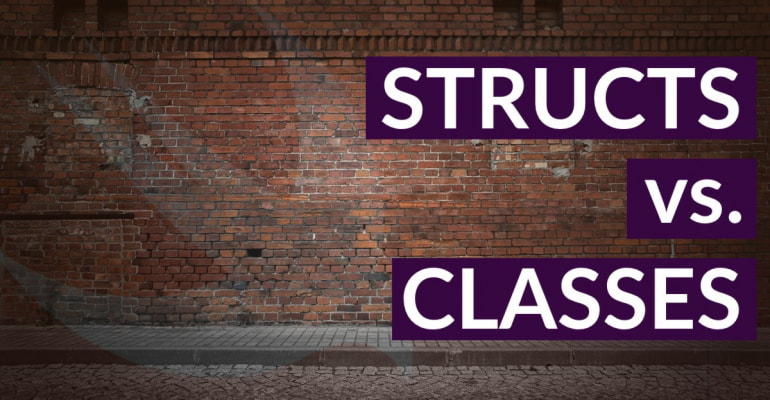 What’s the difference between classes vs. structs? They’re so alike! It’s best to use structs by default, but why? And when should you use classes, then?

Structs are a fundamental aspect of Swift, and they can help to make your code more reusable, more flexible, and less tightly coupled. And last but not least, they help you sharpen your skills as an app developer!

Want to know more about structs and how to use them, before you move on with classes vs. structs? Check out this tutorial: Structs in Swift Explained

At A Glance: Classes vs. Structs

First, let’s take a look at what features classes and structs have in common:

Classes support a few more capabilities that structs don’t have:

That last point is important: classes are reference types, and structs are value types. Here’s what’s what:

When Should You Use Structs?

It’s recommended to use struct in Swift by default. Structs are helpful in these scenarios, too:

Remember that metaphor we used earlier, with Bob and Alice and the phone number? Imagine that the phone number is written down on a Note, a struct. When Bob passes a Note object to Alice, the object is copied, which creates two unique instances. When Alice changes the phone number, Bob’s copy does not change. This means Bob can more easily reason about his code, because he can be certain that his copy cannot be changed without him knowing. If there’s code that changes Bob’s copy, it’ll need to be explicit code.

Just so we’re on the same page, this is how you define and use a struct:

As you can see, the syntax is effectively the same as for defining and using a class. Instead of class name { ··· you write struct name { ···.

Want to learn more about structs? Check out this tutorial: Structs In Swift Explained

When Should You Use Classes?

It’s recommended to use a class if you need the specific features of a class. This is why working with structs is the default, and classes are a deliberate choice.

Classes have a few extra characteristics that structs don’t have:

Next to reference vs. value types, inheritance is the most important difference between a class and a struct. With classes, you can clearly define a parent-child connection between subclass and superclass.

In these last two examples lies a danger: you can end up with a whole bunch of inherited classes – top-to-bottom – that all “decorate” their superclass with different functionalities. Think about SuperCar and MuscleCar, that both inherit from Car, and from Vehicle. This gets tightly-coupled really fast.

It’s easy to get lost in which class inherits what, even though, at first sight, it makes sense to structure your classes like this. What if SuperCar inherits a function that it doesn’t need from Vehicle? What if you want to create a SuperBike, that’s similar to a SuperCar, but you can’t “inherit” or share those characteristics because they’re in different subclass-superclass hierarchies? In that case, it may make sense to use composition instead.

Based on what we’ve discussed about identity and references, we can assert that it’s best to use classes in these scenarios:

To summarize, it’s smart to use classes if you need the features that only classes provide: inheritance, identity, Objective-C interoperability, and scenarios where copying a value doesn’t make sense.

Quick Tip: In many scenarios, you can “upgrade” a struct to a class by merely changing its signature from struct ··· { to class ··· {. Going from class to struct is harder. When you follow the struct-default approach, you keep the option to upgrade to a class later on.

So… that’s structs vs. classes for ya! You learned this: