Written by LearnAppMaking on January 10 2019 in App Development, Swift 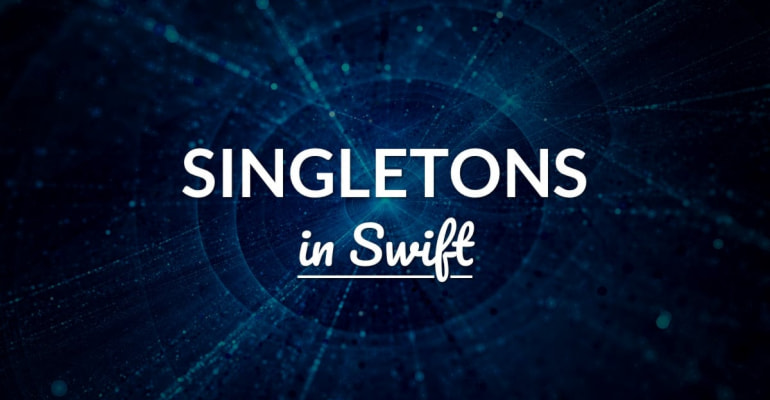 A singleton is a class of which exactly one instance exists, that can be globally accessed. How do you create a singleton in Swift? And why should or shouldn’t you?

What Is A Singleton?

A singleton is a class of which only one instance exists. A few examples:

The second attribute of a singleton is that it has a global point of access. You can access a singleton, eg. call functions on it, from anywhere in your app’s code.

In practical iOS development, you use singletons often. Typical classes like NotificationCenter, UserDefaults, SKPaymentQueue and FileManager have shared or default properties that are singletons.

At other times, you may wish to create a singleton yourself. A good use case is an API class that exposes singleton instance via its shared property. You use API.shared.makeAPICall() to access the API through a single, unified instance. This allows you, for instance, to manage API calls serially.

Before we discuss when singletons are best used (and when not), let’s find out how to code a singleton in Swift.

Coding A Singleton In Swift

This is the best way to create a singleton in Swift:

And here’s how you use the singleton:

We’re creating an API class that has one static property called shared. This property cannot be changed once set, because it’s a constant, and it’s declared statically.

That means we can access the shared property via the class API. This is often called a class property. Compare this to a normal instance property, which can only be accessed via an instance of a class.

What’s interesting is that the shared property initializes an instance of API within the API class. We’re sort of creating an API object that can be accessed through the API class. But there’s more…

In other words, you cannot create an instance of API outside of the API class! This ensures that the API object we’ve created is the only instance in our code. After all, you can’t create more of it.

And now we’ve ensured the API class conforms to the two attributes of a singleton:

This all may sound a little abstract to you, so let’s expand the previous example with some more practical code. Here’s what:

The API class is mostly the same. It’s still a singleton, and it still uses those static let shared = API() and private init() bits of code.

And here’s how we can use the API singleton anywhere in our code:

There’s something else we need to discuss. The API class now manages something called state. You can see “state” as a feeling: you’re either happy or you’re sad, or you’re angry, and so on. You can switch from one state to the other.

The API class can switch between two states:

As you’ll learn in the next section, state and singletons can wreak all sorts of havoc on your code. Managing state poorly is the single biggest reason for singleton misuse.

When To Use Singletons

When do you use singletons? The book Design Patterns: Elements Of Reusable Object-Oriented Software by the Gang of Four has the following to say. Use the singleton pattern when:

That’s complex, but what it boils down to is:

Another use case is subclassing. A global variable in your code can’t be easily subclassed, so that’s why you use a singleton class. Additionally, singletons can be unit tested by using dependency injection. You replace the API instance by an APIMock instance, and gain the ability to unit test API calls without making the actual network requests.

And when do you not use singletons? To answer that question, we’ll have to go back to the state principle we discussed earlier.

A common pitfall for beginner iOS developers is to manage state and its dependencies poorly. Imagine you’re building an app that uses the API class we worked with earlier.

Every time you expand the API class, you tack on more and more properties, such as:

Unfortunately, your state is now all over the place. The API class has dependencies to a bunch of classes that aren’t related to the single responsibility of the API class. Your code has become a bowl of spaghetti, all tangled up. The code may work OK, but it’s impossible to maintain and extend.

Let’s look at an example. The onReturnAPIRequest() function we defined earlier is on the brink of becoming tightly coupled…

And that’s all there is to it! Getting to know singletons is a worthwhile objective, especially if you’re interested in app architecture and systems design.