Home » App Development » How To Solve SIGABRT Error in Xcode

How To Solve SIGABRT Error in Xcode

Written by LearnAppMaking on August 6 2020 in App Development, iOS 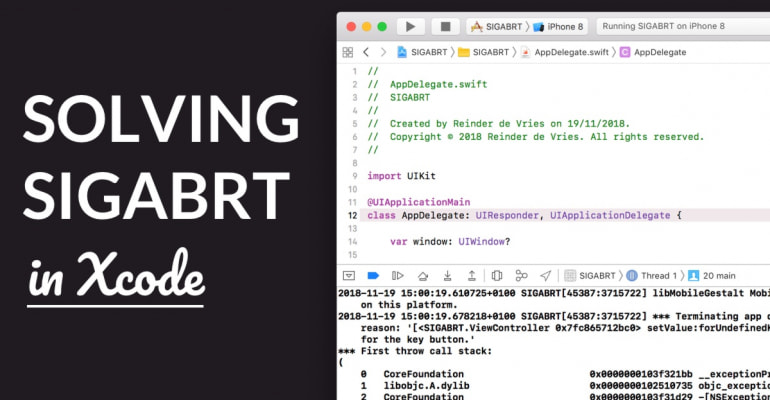 One minute your iOS app runs fine in Xcode, and the next it has hopelessly crashed with a cryptic SIGABRT error. What’s going on!?

What Does “Thread 1: Signal SIGABRT” Mean?

The error SIGABRT stands for “signal abort”. It’s a signal that’s sent by iOS – the operating system – to a running app, which will immediately quit the app because of a runtime error. It essentially means your app has crashed… 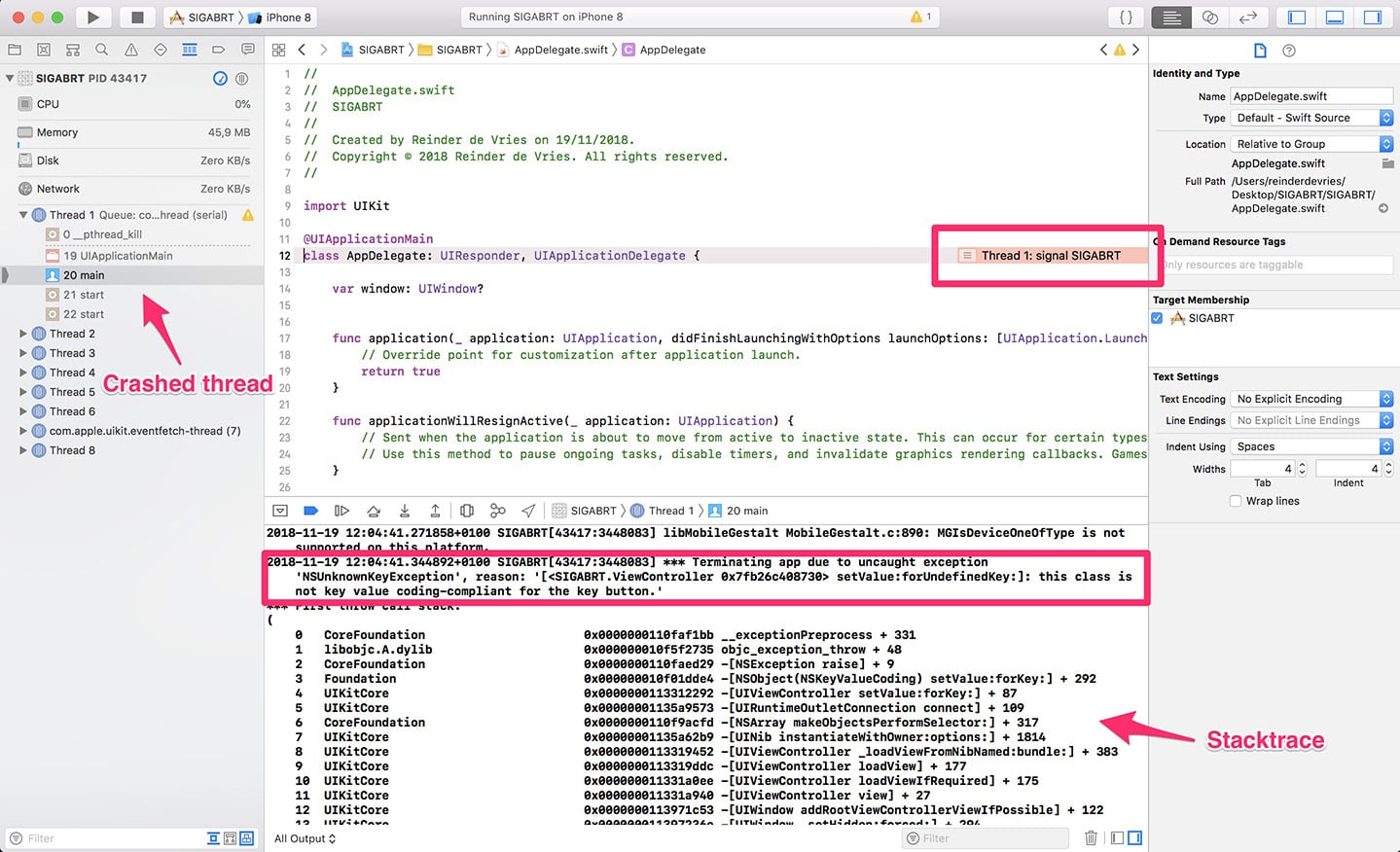 In the screenshot you see a few things:

The problem with the SIGABRT error is that it’s too generic. Xcode is basically saying: “Look, your app has crashed, that’s all we know.” In most cases of the SIGABRT error, you get little information about what’s caused the error.

Before we go on, let’s discuss a few misconceptions and common pitfalls of SIGABRT:

Now that we’ve established a baseline, let’s get to the first cause of SIGABRT.

A common cause of “Signal SIGABRT” is a typo or bug in your outlets. Here’s what happened:

If you’ve changed the name of an outlet property, your app can’t find it anymore. And because of that it will throw an exception. What’s causing the SIGABRT error, is not handling that exception. 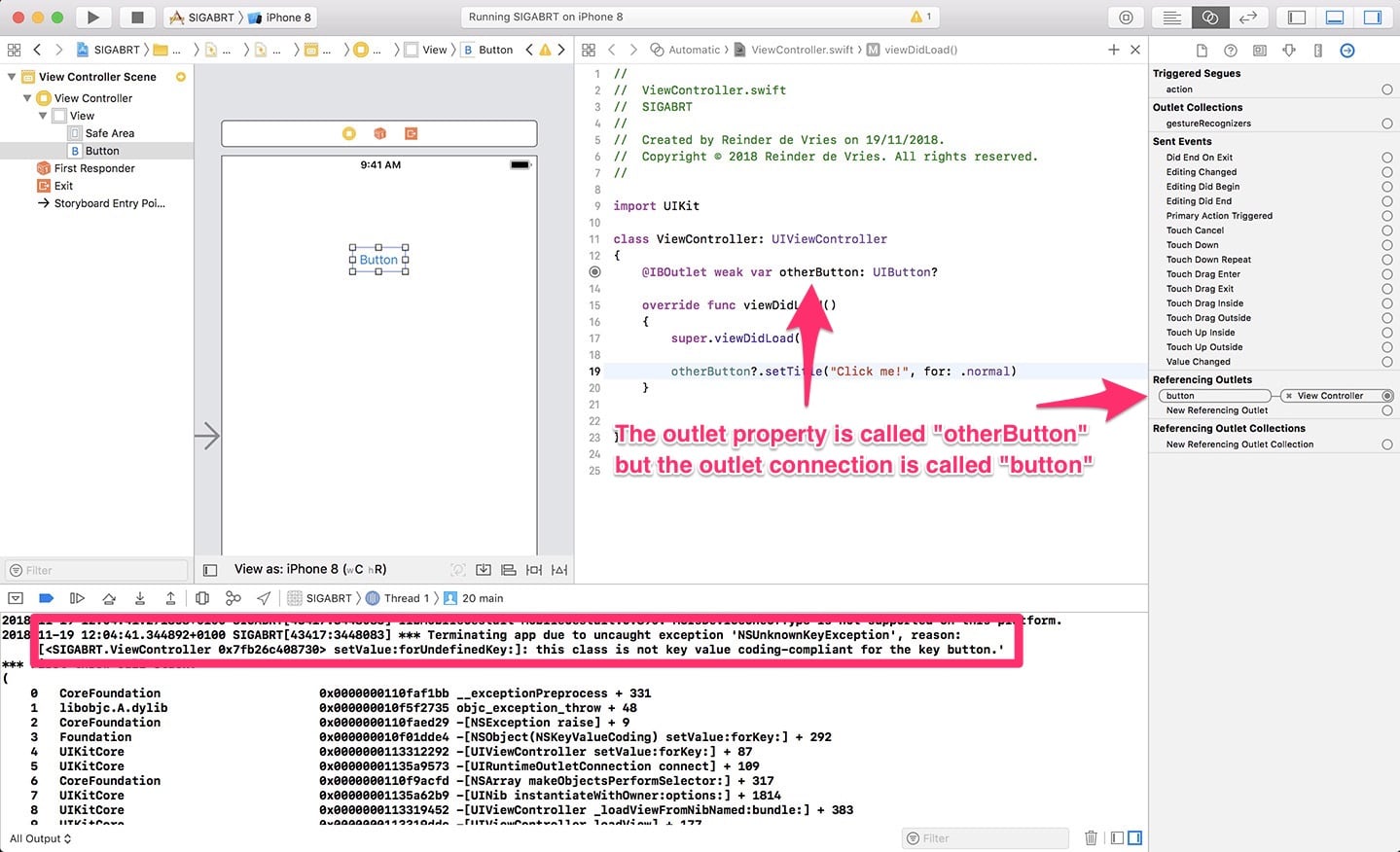 See what’s happening? The property is called otherButton, but the outlet is still called button. At one point we changed the outlet – because the new name is better – and confused the app, which made it crash.

At the top of the stacktrace we also spot another clue:

What does that mean? The app is telling us at this point that the view controller is not key value coding compliant for the key button. This means that it cannot find the button property on the view controller. And that’s true, because we’ve renamed it.

iOS uses a mechanism called key value coding to inspect the properties a view controller has, so it can use those properties to reference UI elements it has created based on the XIB.

How do you solve the bug at this point? You can use 2 approaches:

Quick Tip: Just as a changed @IBOutlet can cause “Thread 1: signal SIGABRT”, so can erroneously changing the name of an action, i.e. with @IBAction, cause the SIGABRT error.

In many cases Xcode won’t show you any helpful error messages for a SIGABRT crash. When that happens, it’s useful to know a few debugging commands, such as bt.

Xcode has an integrated debugging environment called LLDB. It’s what you see at the bottom of Xcode when your app runs, the Console or debug output area. You often see debug messages here, but did you know you can also use it to input commands?

Next time your app crashes, try typing help in LLDB. Like this: 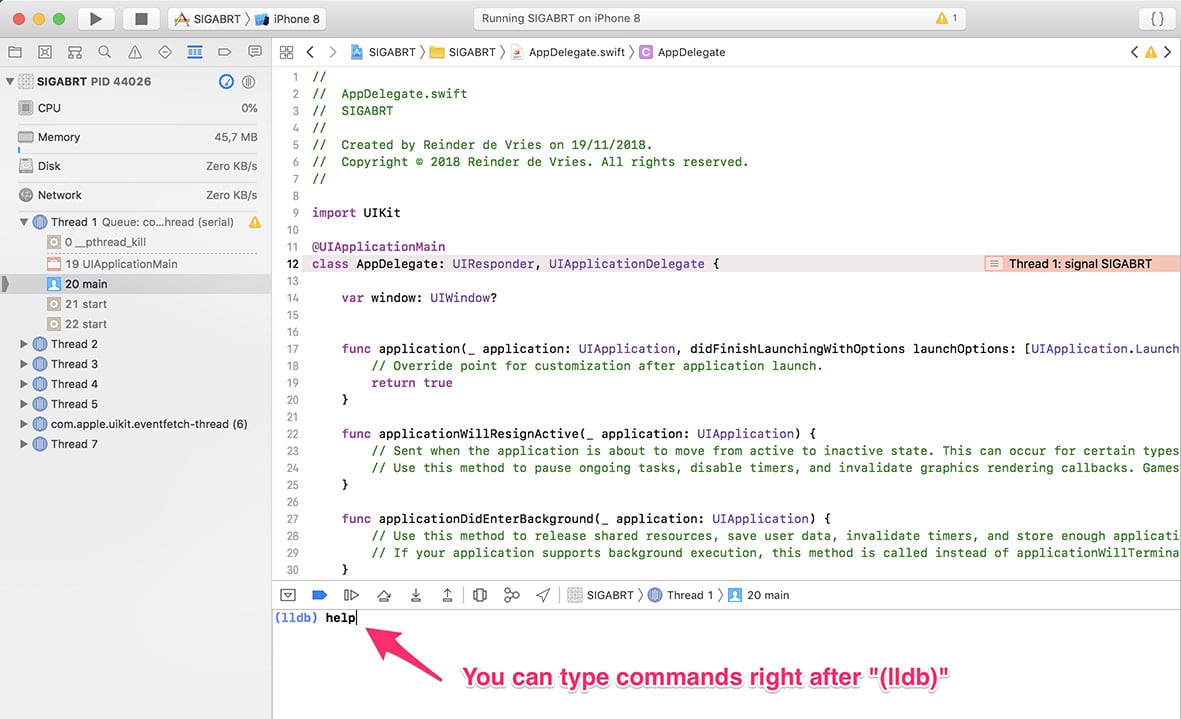 You’ll see that many of the LLDB commands directly correspond to actions you can take with the debugger, such as setting breakpoints, stepping over lines of code, and inspecting runtime values.

One command is particularly useful. You can type in bt to see the current call stack (also called “backtrace” or “stacktrace”). This is a list of all functions that ran up to the current crash. This trace typically includes the function that caused a bug.

Here, check out the stacktrace of a typical Index out of range error. In the screenshot below, we’ve deliberately caused that error by getting index 99 from an array that only has 4 items. When the app crashes, bt can tell us which line of code caused the error.

Can you spot the following information in the stacktrace?

Based on the information we got with bt, we can find the offending line in our code and fix it. Xcode already helped us in this case, by highlighting the error in the editor. In some scenarios you won’t have such luck, and then it can be helpful to use the bt command.

One last thing: you can inspect values at runtime with the print command. In the above scenario, typing print names would have produced this output:

Keep in mind that a stacktrace runs outside-in. The bottom of the stack trace shows top-level function calls, and the higher up the stack you go, the deeper the calls go in. The latest, most recent, deepest-level call is at the top of the stack.

You can use breakpoints to stop execution of your code at a certain line. At that point you can then inspect values and step through functions.

Here’s how you can set an exception breakpoint: 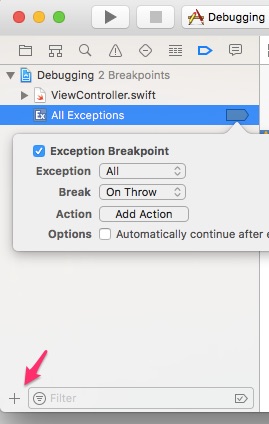 When an exception is thrown, execution of your app halts. You can now use the debugger to inspect values, step through the code, and use LLDB commands. When possible, Xcode will take you to the line of code that caused the exception.

Keep in mind that an exception doesn’t necessarily crash your app! So, whenever the exception breakpoint is enabled, and an exception occurs, your app is halted. Halting code with a breakpoint isn’t the same as an app crash, so don’t let that confuse you.

For example, an exception breakpoint will get triggered by an Unsatisfied constraints exception, but that won’t crash your app. Use the exception breakpoint to gather extra information for the SIGABRT crash, and then disable it once you’ve solved the bug (until it’s needed again).

The SIGABRT error is quite cryptic, and can prove difficult to solve. Why can’t Xcode just give helpful error messages? Well, that’s a good question…

The short answer is that there are so many moving parts in iOS development that Xcode can’t always determine the cause of a crash. Xcode doesn’t know that you erroneously changed the name of an outlet. It only knows that in connecting the outlet, some code was invoked, and that caused an exception.

This means you’ll always see an error that’s as close to the root cause as possible. The best you can do is make lots of mistakes, decrypt lots of error messages, and get to know them better. And what you’ve learned in this tutorial, is how to find and solve the SIGABRT error!