Shuffling Arrays in Swift with Fisher-Yates

Written by LearnAppMaking on July 15 2020 in App Development, Play With Code, Swift 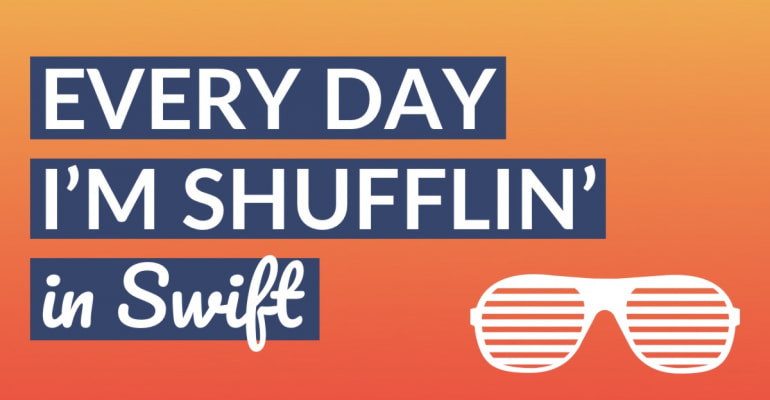 Algorithms are fun! In this tutorial, you’ll learn how to shuffle an array of strings in Swift.

Learning how to efficiently shuffle arrays is a good entry point to learn more about computer algorithms and complexity. You’ll want to understand how efficient an algorithm is and how you can make an algorithm faster.

You might not need to shuffle arrays in every one of your app projects, but algorithms definitely come into play in many of your apps. Understanding how algorithms run efficiently is a must-know if you’re looking for a job as a professional developer.

If you’ve come here hoping for a quick fix, you’re out of luck! Instead of handing you a Swift snippet to shuffle an array, we’re going to dive a bit deeper and figure out how a shuffling algorithm actually works.

Shuffling is one of many algorithms you come across when developing iOS apps. Hopefully, when you come across an algorithm problem in the future, after reading this tutorial, you know how to tackle it…

Quick Note: If you came here just for the code snippet, you’re looking for array.shuffle() and array.shuffled(). We’re about to have a lot more fun than that though, so stick around!

Before you start Googling for a shuffle algorithm in Swift, think for a second how you would perform such a shuffle yourself.

A crucial step in implementing an algorithm is to imagine doing the task yourself. By assessing the steps in the algorithm, you understand it better. There’s nothing worse than building an app from random pieces you found on the internet that you don’t understand!

How would you shuffle an array of strings yourself?

Imagine you’re organising a raffle. Every participant gets a numbered ticket and then a random number is pulled from a box containing a copy of every number. The person with the random ticket wins a prize!

You could do the same thing to shuffle an array:

(Don’t do this at a raffle. People will look at you funny…)

You’re changing the order of the array by pulling out random items and putting them in a new order. That’s shuffling!

Here’s how that looks in Swift:

It works, but this isn’t the most efficient approach to shuffle an array! This is why it’s called the naive approach. It’s working OK, but with a bit more effort we can get the algorithm to run more efficiently.

It’s surprisingly simple. You pick a random number from the sequence, strike it out, and write the number on a separate piece of paper. Like this:

Check out this animation:

Quick Tip: You’ll find that k starts at the total number of items, like 8, and steps down by 1 until it reaches 1. You’ll see the same in the next implementations in this tutorial.

When you’re designing an algorithm you want it to be as efficient as possible. It’s pointless to waste computer resources, right?

The efficiency of computer algorithms comes into play when you’re working with large data sets. What if you need to shuffle an array of a million strings? You’ll want a fast algorithm to do that…

What about everyday apps? Most apps don’t work with large datasets on the front-end, right? Algorithm complexity matters here, too.

When you want to quickly perform a task while your app’s user interface updates, to keep it snappy. You might need to push an intensive task to the background, because performing it on the main thread is too intensive and locks up your app. You can only optimize these real-world scenarios if you understand the fundamentals.

Let’s say you have an algorithm that takes n inputs, like shuffling an array of n items. What time complexities could that algorithm have?

What’s the time complexity of the Fisher-Yates algorithm? It’s O(n​​2).

Intuitively, you’d say that its complexity is linear: O(n). After all, you do more work to shuffle more items. It seems like you touch every item in the array once. So why quadratic time complexity?

You can see this as two nested for-loops. The outer loop iterates randomly over each item of the array until all items have been selected, and the inner loop counts out each of the remaining items to select the k-th item.

Algorithms also have another cost: space.

You can also use Big O Notation to express the amount of memory a computer algorithm needs to complete, compared to the size of the input. This is called space complexity. It’s always expressed as additional space, so the original input for the algorithm isn’t counted.

If the original array has 10 items, you need space for 2 x 10 items to complete the shuffle. In Big O Notation, that’s O(n) of additional space.

Ultimately, when designing an algorithm you want to strike a balance between time and space complexity. There’s often a trade-off between the two. You also want to optimize your code for readability and maintainability. It’s not always smartest to create a super fast algorithm that’s hard to read and maintain.

Shuffling An Array Of Strings In O(n) Time

What can you do to improve the efficiency of the Fisher-Yates algorithm to shuffle an array?

First, let’s figure out what needs to happen to improve efficiency:

In other words, you only want to iterate the array once, to reduce time, and you don’t want to duplicate the input, to reduce space.

The solution is surprisingly simple. Instead of generating a new array, you’ll shuffle the array in-place. This ensures that you wont use any extra space.

To achieve an in-place shuffle, you need to take a random item from the array and swap it with the last item in the array.

In the above example, this happens:

This is an animation that shows the swaps. See how the green highlight moves from right to left, and the orange highlight randomly selects numbers?

There’s a few things to understand about this implementation:

As a result, the last swap always attempts to swap item 0 with item 0. Which is pointless! Does that mean you never swap the first item? No! There’s always a chance the first array item gets swapped with any of the others. Every item has the same chance of getting swapped. If it isn’t swapped, the before-last item 1 is always swapped with the last item 0 because it’s the only item it can swap with!

Is that all there is to shuffling an array of strings in Swift? You bet! Most programming algorithms for shuffling you come across will use modern Fisher-Yates, like you’ve seen in this tutorial.

Here’s what you learned in this tutorial:

Awesome! Looking for more info on shuffling, algorithms and Big O? I recommend these resources: