Home » App Business » Should You Build an App Yourself or Outsource It?

Should You Build an App Yourself or Outsource It?

Written by LearnAppMaking on January 19 2020 in App Business 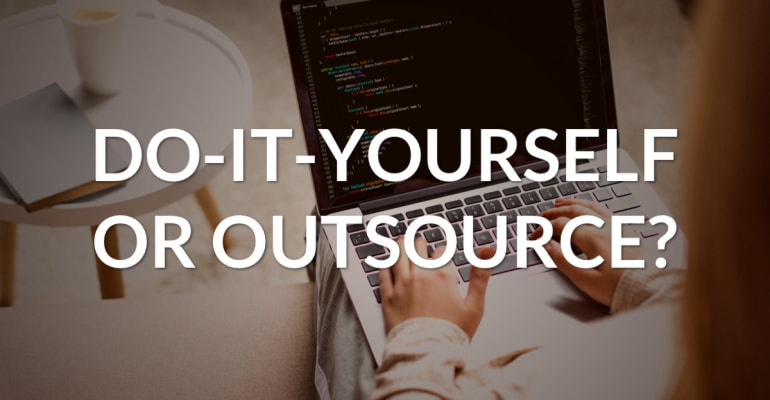 You’ve got an app idea that you want to publish in the App Store. But… you don’t know how to code iOS apps. Should you learn to code, or outsource development to another developer? That’s what we’re going to discuss in this tutorial!

Build It Yourself Or Outsource App Development?

Here’s a question I get regularly from readers of the blog: “I’ve got an app idea, but should I build it myself or hire a developer?”

That’s hardly a helpful answer, so in this tutorial we’re going to discuss what your best approach is – what does “it” depend on? We’ll discuss this by focusing on two questions:

The DIY/outsource question doesn’t have an either/or answer. If you won’t build the app yourself, you don’t necessarily have to outsource, and vice versa. The answer lies in what you value. Do you value learning a new skill, or excitement about a new weekend app project, or getting the app out there ASAP?

When you invest $20.000 in an app project, you might not get a return on your investment. After all, there’s (almost) no way of knowing whether an app idea is going to succeed. In fact, there is a way, which we’ll get to. But first, we have to move forward from DIY/outsource question.

OK, let’s say you’re considering learning how to code iOS apps. What would that look like for you? Here’s what I think:

The experience of building an app, and having published an app, are two different things. If you want to learn iOS development, then the iOS development itself will need to give you some sort of satisfaction, enjoyment or reward, in order for you to continue with it. You can use this insight to answer the above question for yourself. “It depends, what do you really want?”

Want to learn how to code iOS apps? Check out the Developer bundle, here.

Option 2: Outsource To An iOS Developer

OK, let’s say you’re now considering to hire a developer to build the app for you. You don’t want to learn iOS development, you just want the app. After a quick bit of Googling, you’ve found plenty of platforms that can help you find a freelance iOS developer.

Looking through the hourly rates iOS developers charge, you’re inevitably going to ask yourself: “How much is this going to cost me?” The demand for app developers is high these days, and rates range from $35/hour to upwards of $150/hour.

Maybe you didn’t blink when you read that, maybe you did. What I know for sure, however, is that if you’re investing that much into an iOS app, you’ll want to see some returns. That’s inevitably got you asking: “How much money can I make from this app?”

It’s hard to determine, from the start of a business, whether it’ll be successful in the long run. One approach can help you here: the lean startup methodology, as popularized in Eric Ries’ book The Lean Startup.

In short, you build a small scale version of your app or product, that you put in front of your target audience, after which you measure their responses. The smartest option is to ask them to make a purchase, but anything from email signups to ad clicks works. You want to prove that your target audience is willing to pay for the product you’re about to build. This process is called business validation.

If there was one proven approach to build a 100% successful business, you’d see fewer get-rich-quick schemes, and fewer failed businesses. If a recipe for success existed, we’d only see music artists who produced Greatest Hits albums. A workflow that helps you find the proof you need, and validate your ideas, is the best we’ve got – from there on out, it’s a calculated risk.

Want to learn how to validate, launch and promote your iOS app? Check out the Publisher bundle, here.

So far, we’ve looked at this question: “I’ve got an app idea, but should I build it myself or hire a developer?” Since the answer to that question is “It depends.”, we’ve defined 2 substitute questions that help you move forward:

Based on those questions, we’ve discussed that there’s no point in learning iOS development if you just want the app. If learning how to code iOS apps execites you, though, you should definitely pursue that path.

Likewise, outsourcing your iOS app to a developer is a potential path forward, but the money you can spend on building an MVP is restricted by the level of success you can expect. You’ll want to know if you’ll recoup your investment. An approach to find out, and to what degree, is lean business validation and building an MVP.

Want to learn how to get hired as a professional iOS developer? Check out the Professional bundle, here.

We started out trying to answer your question of: “Should I build an app myself, or outsource? and we’ve come away asking all sorts of other questions, and trying to find answers, about business, building apps, and finding success.

Awesome! I hope it’ll help you move forward, and let me know how it’s worked out for you.

How To Build a Profitable App with a Pro Upgrade