Scope and Context Explained in Swift

Written by LearnAppMaking on March 25 2021 in App Development, Swift 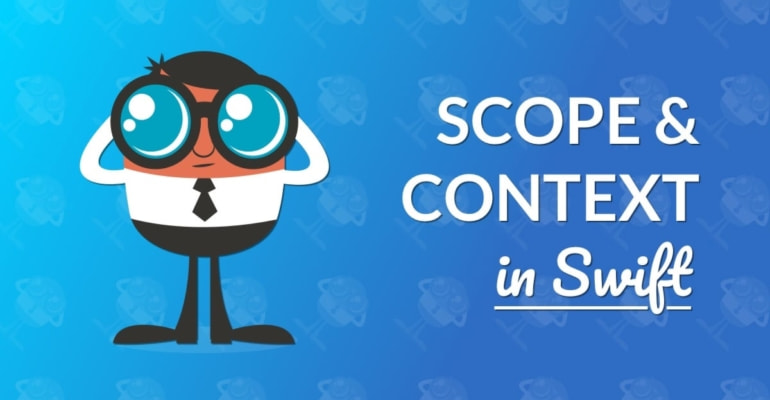 What’s “scope” in Swift programming? The concept of scope states that, if you’ve declared a variable in one “place” of your code, you cannot use it outside that place. It’s an implicit but essential rule in programming, and it can be challenging to grasp at first.

In this tutorial, we’ll focus on exploring scope, and what it means for practical iOS development.

What is Scope in Swift?

We’re going to start with an example that demonstrates different scopes. Check out the following Swift code:

Take a moment to read through the code. Without cheating, can you guess what the values of age and anotherAge are?

You’re working with 2 kinds of scope in this example, the global and local scope.

Now, let’s look at that code again. The variable age is defined inside the getAge() function. We cannot access that same variable outside the function. This is an important rule in working with scopes.

These 2 variables have the same name, but they’re declared in different scopes. They have 2 separate values. Their “regions” of code – their scope – don’t conflict with each other. That’s why we can use them both, with the same name but different values, separately!

Here’s how the above code works, line by line:

When the code runs, a variable age is initialized with value 99. We then initialize a variable called anotherAge with the value that’s returned from the getAge() function, which is 43 (42 + 1). That value is then incremented by one, with anotherAge += 1.

Finally, we’re printing out the values of these variables. The value of age is 99, because it hasn’t changed. The value of anotherAge is 44. It’s initialized as 42, incremented inside the function, and incremented outside of it. Despite 2 of these 3 variables having the same name, they don’t conflict with each other, because they’re declared in different scopes.

Starting to get the hang of scope? It’s nothing more than the “region” or place in which you have access to certain variables. We’ve also identified 2 essential rules:

There are exceptions to these rules, as you’ll soon see. For example, a property from a class scope can have the same name as a variable in a function scope – but you’ll need to use self to access the former.

It’s simplest to think of scope as an actual scope, you know, the one you find on top of a rifle – or a viewfinder in your photocamera, or in binoculars. When you look through the scope, you can’t see what’s outside of your view!

Local scope is the scope you’re currently in, i.e. typing in, that block of code between squiggly brackets { }. If you want to practice hands-on with scope, just keep track of what your current, local scope is, and to which variables, types, etc. you have access.

In Swift, functions are at the deepest level of scope, which is why a local scope is often the same as the function scope. Closures are at a level deeper than functions, but closures can “close over”, which makes them kinda special. More about that later!

So far, we’ve only looked at the global and local scopes. There’s also something called a function scope, and classes have a scope too. In fact, frameworks, modules and Swift files themselves have a scope. Scopes have levels, they’re hierarchical, and types are scoped too. Pfew! Where do we even begin!?

As far as we can see, this class is defined in the global scope. We’re now going to add an enumeration to this class, as a nested type. Like this:

In the above code, we’ve defined an enum called Kind. It has 2 cases – for the sake of this example, we’re considering any product either a food (can eat it) or a thing (cannot eat it). We’ve also added an instance property kind of type Kind, which is initialized with enum value .thing by default.

Let’s discuss this example in terms of scope. What’s the scope of all that stuff? Here’s what:

However, something else is going on. We can use Product in the global scope, and because the Kind enum has internal access control by default, we can use it as the Product.Kind type anywhere in the code.

The code below can be used anywhere in the code. We can reach the Kind nested type via the Product class:

And, likewise, the kind property is defined in the class scope, but because it’s also publicly accessible, we can access that property on any object of type Product.

A crucial distinction here is that the Product class and the dishwasher variable are declared, and thus available, in the global scope. That’s why we can use them in the above code snippet.

Let’s get back to those different types of scope. Here, check out the Swift code below. We’re adding a canEat() function to the Product class:

We’re using the kind property inside the canEat() function. That means scopes have a hierarchy, because we can access a property from the class scope inside the function scope.

However, if we defined a local variable inside canEat(), we can’t use that variable in another function in the same class, because they have different scopes.

Here’s a shorthand for the hierarchy of scopes:

The way to read this hierarchy is to understand that you’ve got access to the global scope (higest) in the closure scope (lowest), but not the other way around. You can access what’s higher in the lower levels, but not what’s lower in the higher levels.

The visibility of a type, variable, property, etc. determines whether it can be accessed. This is called access control. We’ve got 5 different levels of access: open, public, internal, fileprivate, and private. In general, we shorten that to “is it public?” or “is it private?”, because that’s quicker. You can learn more about access control in Swift in this tutorial: Access Control Explained in Swift

Scope is everywhere in practical, day-to-day iOS development. When you’re passing values around in your app, tracking to which variables, types etc. you have access, is a continual activity.

Chances are that, if you’re relatively new to iOS development, you’ve already incorporated scope in your reasoning about your code, without knowing it! “Which variable can I access where?”

An interesting case of scope is that of closures. As you may know, a closure is a block of code that can be passed around your code. It’s similar to a function, except that the code itself is the value. You can assign a closure to a variable, pass it into a function, after which it ends up in a different part of your program.

Closures are often used as so-called completion handlers. Say we’re downloading an image asynchronously from the internet. When the downloading completes, at a future point in time, we want to execute some code to show the image. We define this code in a closure and pass it to the function that downloads the image. This function then executes the closure when the download has completed.

Note: Scope is a concept regardless of whether you’re using UIKit or SwiftUI. If you’re into SwiftUI, don’t disregard the above example merely because it uses a view controller. The point of this section, as you’ll soon see, is how you can use the property imageView inside the closure scope. That applies to SwiftUI, and other components, too!

In the above code, we’ve created a view controller class with an imageView property. Inside the function, we’re calling a hypothetical downloadImage(_:completionHandler:) function. Its second parameter, the completion handler, between the innermost squiggly brackets, is a closure. When the image download has completed, we’re assigning the downloaded image value to the image property of the imageView, which will show the image.

In the above example code, the closure holds onto a reference to the imageView property. It needs that property later, to set the image. When the closure finishes executing, this reference is released.

Interesting, isn’t it? Understanding capturing is the ultimate test of your understanding of scope. You’ll have to figure out why the closure, which is executed in the future, as seen from the context of the viewDidLoad() function, could possibly have access to the imageView property. It’s because the closure has access to the scope it’s defined in!

Scope and context are often confused. Scope is fixed, because the code you write is fixed. Context is fluid, and it depends on the execution of your code. So, you may have access to a property because it’s in scope, but because of the context of your code, i.e. its point in execution, that property is empty. You can see scope as how your code is defined (fixed), and context as what your code does at any given point in its runtime (fluid). Think of it like riding a motorcycle: the motorcycle has 2 wheels (scope) and whether they’re spinning or not depends on you riding the bike (context).

How to Fix “error: cannot find ‘x’ in scope”

Now that we’ve discussed what scope is and how it works, let’s focus on the most common error you’ll find when working with scopes. It’s this:

This is a compile-time error, so it’ll pop up when you try to compile code that results in this error. As you’ve guessed, the meaning of it is simple: the variable name you’re referring to doesn’t exist!

When you run the above code, you’ll get the following error:

What’s going on here? We’ve obviously made a mistake somewhere. Even though the line for c in text makes sense – loop over every character in text – the variable text doesn’t exist. It’s an understandable typo: text should be string, which is the input parameter for the reverse() function.

In general, it’s safe to assume that the “Cannot find ‘…’ in scope” refers to a variable, function, type or other symbol that doesn’t exist. If you want to solve this error, and fix the bug, start with what doesn’t exist and work your way from there (i.e., text).

It’s good to know that the “Cannot find ‘…’ in scope” error is a symptom, so it’s not the root cause. For example, in the above code, referring to “text” was a typo. It doesn’t help at all if we create a new variable text just to solve the error, only to discover later that the reverse() function doesn’t work anymore.

What other problems can cause the “Cannot find ‘…’ in scope” error?

Note: Sometimes you want a variable or function to exist in a certain place, but it simply doesn’t. Let’s say you’ve got 2 views – how do you get that variable from here to there? That’s where passing data from one component to another comes in. Check out these tutorials: How To: Pass Data Between Views with SwiftUI and How To: Pass Data Between View Controllers in Swift

Scope is a concept that’s hard to put into rules and words, but once you get the hang of it, it becomes second nature. You’ve been working with scope all along, maybe even without knowing it. Scope is the answer to the question: “Can I use this variable here?” Neat!