Written by LearnAppMaking on March 4 2021 in App Development, iOS 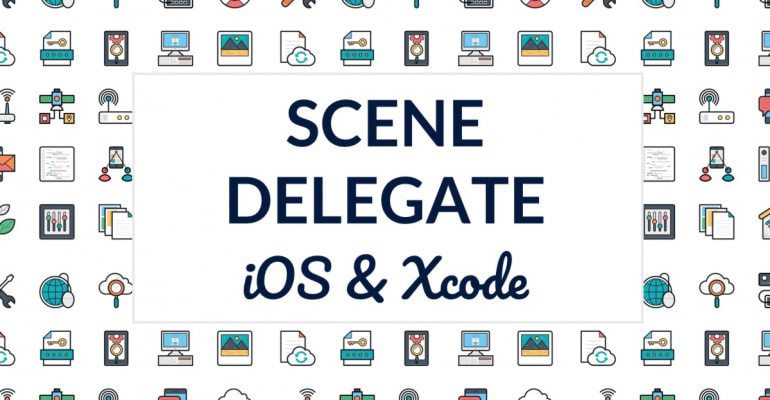 What does the SceneDelegate class in your iOS project do? In Xcode, the scene delegate and/or app delegate is added automatically for the default iOS app project template. What are these delegates for, exactly?

In this tutorial, we’ll dive into the scene and app delegates in Xcode, and how they affect SwiftUI, Storyboards and XIB based UIs.

You’re probably already familiar with the app delegate. It’s the starting point for an iOS app. Its application(_:didFinishLaunchingWithOptions:) function is the first function the operating system calls upon starting your app.

The AppDelegate class of your app adopts the UIApplicationDelegate protocol, which is part of the UIKit framework. The app delegate’s role has changed since iOS 12, as we’ll soon discover.

Here’s what you typically used the app delegate for:

A boilerplate app that uses Storyboards has a surprisingly boring app delegate, because it only returns true. Like this:

A simple app that uses XIBs, and consequently sets up its own root view controller, looks something like this:

Why does the application(_:didFinishLaunchingWithOptions:) function return true? This boolean value indicates that the app can be started, based on the options passed to the function. It’s common to return true, but you can also return false when the app cannot start based on some URL resource or user activity.

In the above code, we’re creating a view controller, put it in a navigation controller, and assign that to the rootViewController property of a UIWindow object. This window object is a property of the app delegate, and it’s the one window our app has.

An app’s window is an important concept. In essence, the window is the app, and iOS apps only have one window (so far). This window houses your app’s User Interfaces (UIs), dispatches events to views, and it provides a main backdrop to display your app’s content. In a way, the concept of “windows” is what Microsoft Windows is named after – you know the one – and on iOS, that concept is no different. (Thanks, Xerox!)

OK, now that that’s out of the way, let’s move on to the scene delegate.

In case the concept of a “window” is unclear, check out the app switcher on your iPhone. Double-press the Home button or swipe up from the bottom of your iPhone and voilá, you’re seeing the windows of the apps that are currently running. This UI called the app switcher.

… vs. The Scene Delegate

On iOS 13 (and up), the scene delegate takes over some of the roles of the app delegate. Most importantly, the concept of a window is replaced (more or less) by that of a scene. An app can have more than one scene, and a scene now serves as the backdrop for your app’s User Interfaces and content.

Especially the concept of having one app with multiple scenes is interesting, because it allows you to build multi-window apps on iOS and iPadOS. Every text document in a word processor app could have its own scene, for example. Users can also create a copy of a scene, effectively running multiple instances of one app at a time.

Practically, using a scene delegate is most visible in Xcode in 3 places:

First off, the SceneDelegate class: 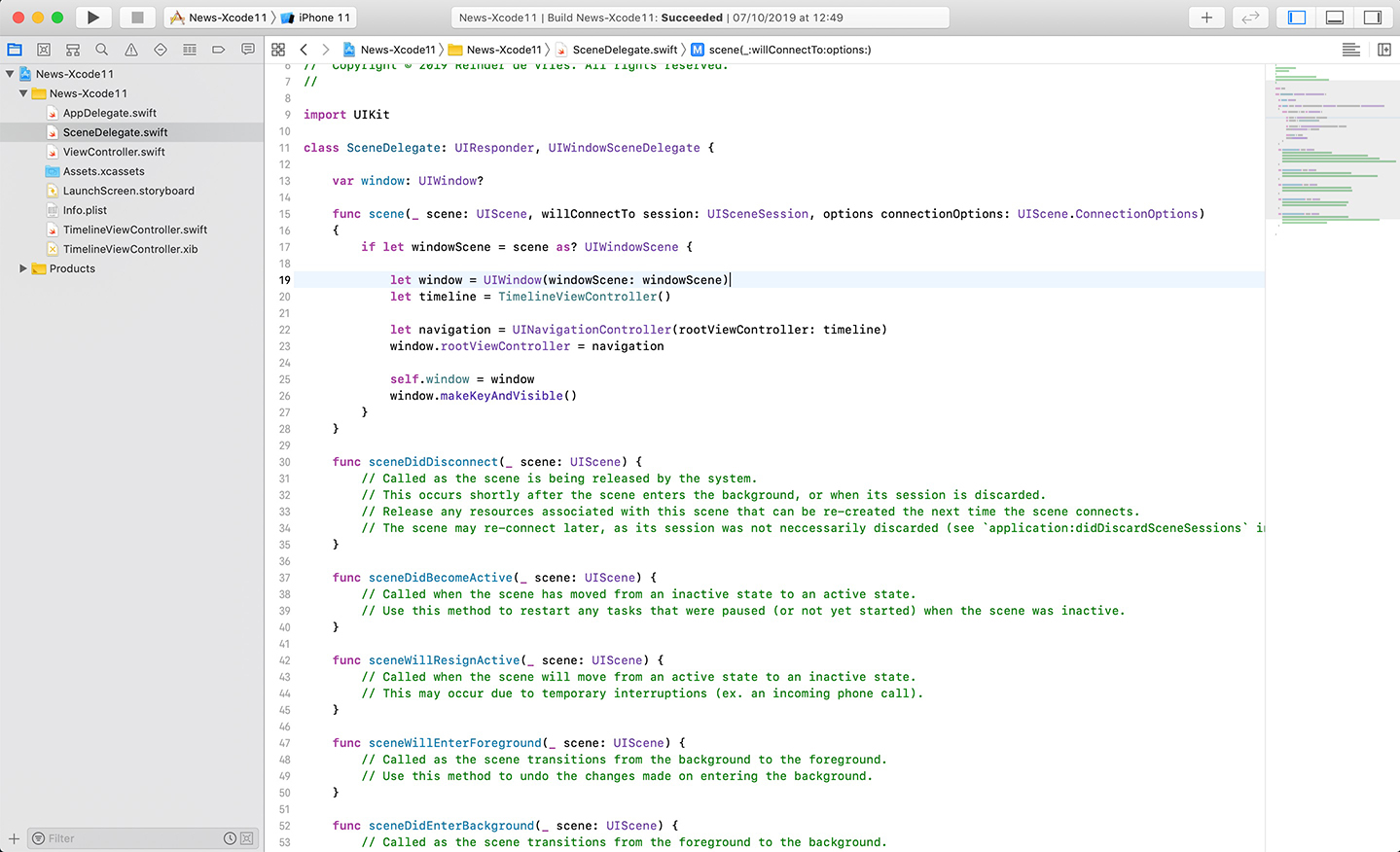 A scene delegate’s most important function is scene(_:willConnectTo:options:). In a way, it’s most similar to the role of the application(_:didFinishLaunchingWithOptions:) function of the app delegate. This function is called when a scene is added to the app, so it’s the perfect point to configure that scene. In the above code, we’re manually setting up the view controller stack, but more about that later.

It’s important to note here that the SceneDelegate uses delegation, of course, and that one delegate typically responds to any scene. You use one delegate to configure all scenes in your app.

The SceneDelegate also has these functions:

See the symmetries between those functions? Active/inactive, background/foreground, and “disconnect”. These are typical lifecycle events for any application or process.

Since iOS 13, the AppDelegate class now includes two more delegate functions related to the management of scene sessions. When a scene is created in your app, a scene session object tracks all information related to that scene.

At the moment, the scene session is used to designate a role to a scene, such as “External Display” or “CarPlay”. It’s also used to restore the state of a scene, which is useful if you want to use state restoration. State restoration allows you to preserve and recreate a UI between app launches. You can also assign user info to the scene session, which is effectively a dictionary you can put anything in.

The application(_:didDiscardSceneSessions:) is quite straightforward. It’s called when the user of your app closes one or more scenes via the app switcher. You can use this function to dispose of resources that these scenes used, because they’re not needed anymore.

It’s important to contrast this function with sceneDidDisconnect(_:), which is merely called when a scene disconnects, but isn’t necessarily discarded. It may reconnect, whereas application(_:didDiscardSceneSessions:) marks the moment a scene is quit, with the app switcher.

The Application Scene Manifest manifest is part of the Info.plist file, which is a well-known place for configuration values of your app. This property list includes values like your app’s name, version, supported interface orientations, and now, the different scenes it supports.

It’s important to note here that you declare types of sessions, and not the sessions themselves per se. Your app can support one scene, create copies of that scene, and use that to create a multi-windowed app.

Here’s an overview of the manifest, as part of Info.plist: 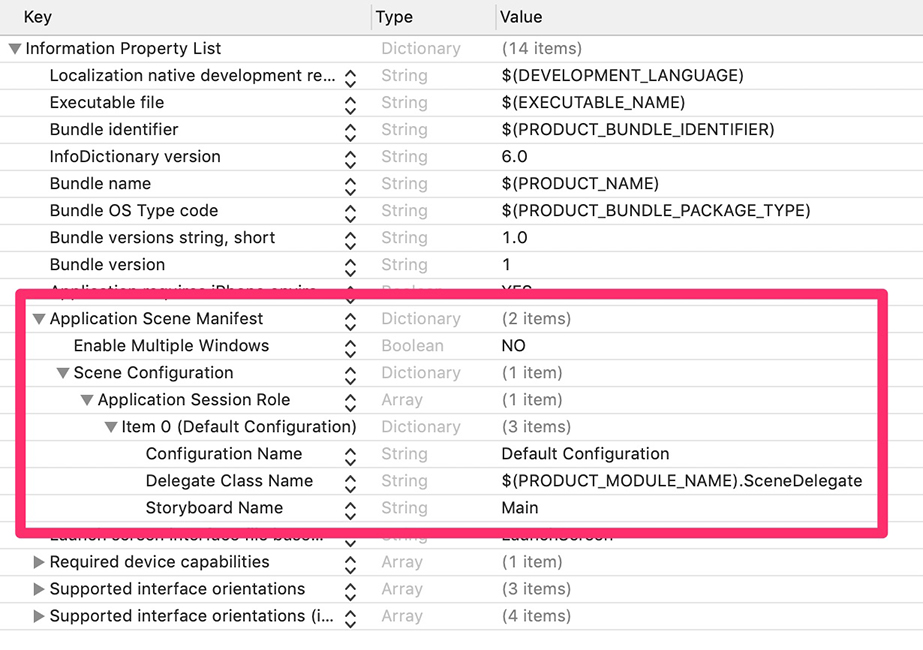 The most important information is kept inside the items in the Application Session Role array. This entry lists the following:

That storyboard name item might remind you of the Main Interface setting, which can be found in the Project Properties configuration of an Xcode project. Within a basic iOS app, if you don’t use scenes, this is where you’d set or change the main storyboard now.

How do the SceneDelegate, the scene sessions in the AppDelegate, and the Application Scene Manifest play together to create multi-window apps?

Awesome! Now that we’ve got a playing field, let’s find out how scenes affects building UIs in Xcode.

Going forward, the most simple way to bootstrap an iOS app is by using SwiftUI. In short, a SwiftUI app mostly relies on the SceneDelegate to set up the initial UI of the app. 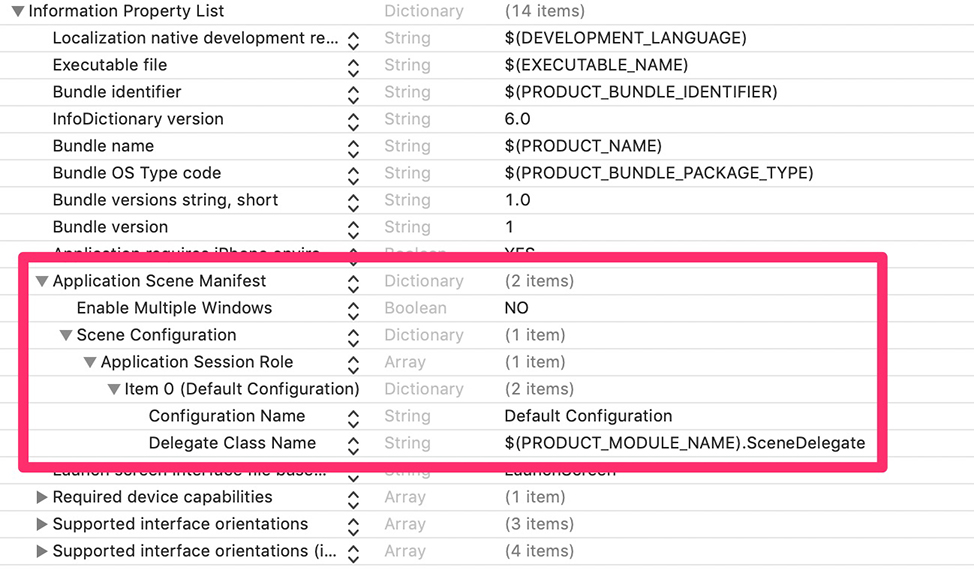 Are you building a primarily SwiftUI-based app? It may make sense to use the SwiftUI App setting for App Lifecycle, when creating the app. This adds an App protocol implementation to your app, which is the starting point of your SwiftUI app. Learn more here: SwiftUI’s App Lifecycle Explained

It’s fairly standard for a default app. What stands out, is that the Default Configuration doesn’t have a Storyboard Name set. Remember, if you want to support multiple windows, you’ll need to set Enable Multiple Windows to YES.

We’re going to skip the AppDelegate, because it’s fairly standard – in this scenario, it’ll only return true. Easy-peasy.

Next up, the SceneDelegate class. As we’ve discussed before, the scene delegate is responsible for setting up the scenes of your app, as well as set up their initial views.

All this may seem complicated, but from a high-level overview, it’s quite simple:

Storyboards, next to XIBs, are an effective way to build UIs for your iOS apps. Going forward, we’re going to see more SwiftUI apps, but for now, storyboards are still quite common.

Interestingly, you don’t have to do anything to create a new iOS project in Xcode, with Storyboards, as far as the new scene delegate goes. Just choose File → New → Project…. Then, choose Single View App. Finally, select Storyboard for User Interface, and you’re done.

That’s it. Really short chapter, this one…

Setting Up Your App Programmatically

Plenty of developers create their UIs programmatically, and with the dawn of SwiftUI, we’re only going to see more of that. What if you don’t use storyboards, but you use individual XIBs to create your app’s UI? Let’s check out how the scene delegate fits in here.

First off, the app delegate and Application Scene Manifest are exactly as you’d expect them: set to their defaults. We’re not using a storyboard, and instead, we’re going to set up the initial view controller in the scene(_:willConnectTo:options:) function inside the SceneDelegate class.

Looking to add scene support to an existing iOS app project? Check out these instructions.

Pfew! That’s quite a bit of work, for such a simple component. As we’ve discussed, the scene delegate allows you to add multiple windows to your app.

How To Create a New Xcode App Project