Written by LearnAppMaking on May 7 2019 in App Development, Play With Code, Swift 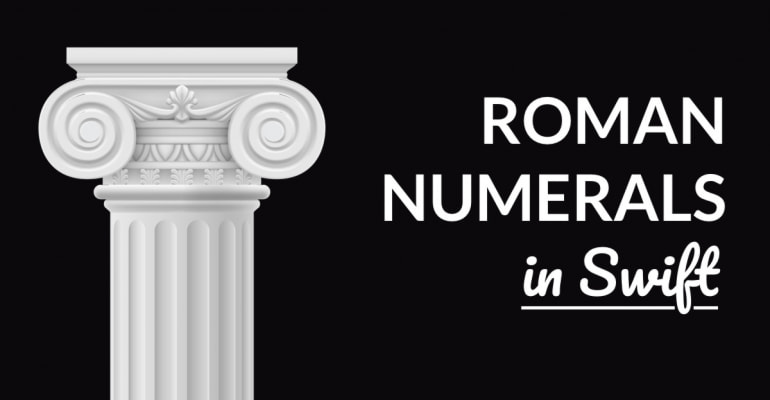 Roman numerals, such as MMXIX, are exciting! In this tutorial, we’re going to write some code that converts any integer number to a roman numeral. It’s a fun, short exercise that touches on many aspects of the Swift programming language. It’s perfect if you have a spare minute or two to play with code!

A big thanks to Les from the United Kingdom, for the inspiration to write this tutorial! Keep having fun coding :-)

What Are Roman Numerals?

Before we start, let’s do a quick refresher on roman numerals. Roman numerals are a numeric system that originated in ancient Rome. With it, a number like 2019 is written as MMXIX, in letters of the Latin alphabet.

Roman numerals use 7 symbols, each with a fixed integer number:

Roman numerals were used until the late Middle Ages (1500 CE), but in our modern world they still have their uses! You see roman numerals on clocks, paper currency, buildings, monuments, and even movie credits.

The roman numerals system is basically a decimal or “base 10” number system, written from left to right. Instead of each power of ten having its own decimal place, roman numerals “add up” symbols to a given number. It’s easiest to think of them as “tally marks.”

Setting Up The “roman(number:)” Function

We’re going to write a Swift function that can convert arbitrary integer numbers to roman numerals. Let’s get started!

First, let’s think about the input and output for this function. The function needs an Int value as input, and outputs a value of type String. So, our function declaration will be this:

Next, inside the function, we’re going to define the roman numeral system, like this:

The above code defines exactly the same as the table in the previous section. Every decimal value has a roman numeral, such as C = 100. Both arrays have exactly the same amount of items, so we can use identical index numbers to look up numerals by decimals.

Next, we’re coding this inside the function:

The above code first defines a variable result of type String. We’re going to use this variable to build up the resulting roman numeral, i.e. the output string.

The local variable number is declared with the function parameter number (which is a bit ugly). Parameters are constants, so they can’t be changed. By “redeclaring” number as a variable, we’re now allowed to change number. We couldn’t have used the inout keyword here, because that would have produced the unintended side-effect of changing the function’s argument, as you’ll see later on.

Why don’t we use a dictionary for decimals and numerals? Well, dictionary items don’t have a sort order! The algorithm we’re about to write relies on a larger-to-smaller sort order, which won’t work with dictionaries. An alternative would be using tuples, or sorting the dictionary and decomposing its keys and values – but what we have now is much simpler.

Alright, we’re getting to the core of the algorithm. Before we start, it’s worthwhile to consider how we would convert a number to roman numerals with pen and paper. This is always a great idea if you need to design an algorithm.

We could say that we’re subtracting numbers from 1776 until we reach zero. Each number we subtract results in a different symbol added to the final result. Would it be possible to put that workflow into an algorithm?

First, let’s start with a while loop. Like this:

This loop will keep iterating for as long as number is greater than 0. Differently said, it’ll stop if number is zero. We don’t know how many iterations we need, so we’re using while instead of a for loop.

Next, we want to loop over every item in the decimals array. We’re going to attempt to subtract this decimal number from number. That’s why we sorted the decimals array from largest-to-smallest, so we can see if a decimal would “fit into” the input number.

So, we write this inside the while loop:

The for loop is used to iterate over the decimals array. We’re using the enumerated() function so we can access both the array index and the array value, with the index and decimal constants in the tuple.

Inside the for loop, we’re checking if number minus decimal is greater or equal to zero, with an if block. This is exactly what we did in our pen-and-paper workflow, earlier.

Let’s finish the code by writing the following inside the if block:

Here’s what happens on those 3 lines:

Finally, we return the resulting value in the function with:

Here’s the complete code once more:

Let’s go over the core principles of the algorithm.

You can see the algorithm do its work more clearly, by adding the following line inside the if block:

You can run the function with the following code:

We haven’t yet incorporated subtractive notation in our algorithm. We discussed before that some symbols, such as for 9, are written as IX or “one before 10”, instead of VIIII.

The algorithm we’ve coded so far works by attempting to subtract decimals from the input value, substituting them for roman numerals. We could adjust the algorithm to incorporate numerals like IX with some complicated code, but as it turns out, supporting subtractive notation is incredibly simple.

Replace the declaration at the top of the function with:

Instead of only using the basic values M, D, C, L, X, V, and I, we’ve simply added the other symbols, like CM, to the array as well. For our algorithm, it doesn’t matter much if you subtract 900, or 500 and 4 times 100! As long as the decimals and numerals are in descending order, the subtraction mechanism works perfectly fine.

And that’s everything there’s to it! Here, try out the code for yourself with this Swift sandbox:

But… what about converting numerals back to integer values? We’ll leave that for another day! If you’re up for a challenge, however, try to find the longest roman numeral between 1 and 3000.

Want to learn more? Check out these Swift exercises: