Home » Blog » Dev Careers » Recession Proof Developer – A How To

Recession Proof Developer – A How To 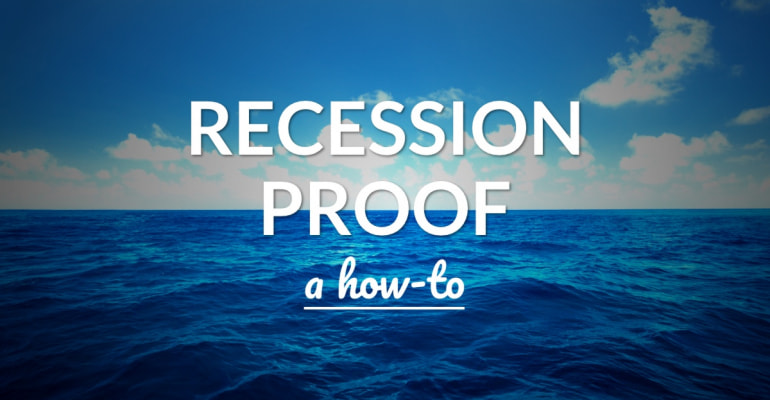 How do you survive an economic recession as a software developer, let alone thrive in it? That’s what we’ll focus on in this article. You’ll learn 3 key approaches to make the most of a recession and how to be ready when the wind picks up again.

Here’s what we’ll focus on:

This article is especially suited for:

I became a freelance software developer in 2008, right in the middle of the 2008 financial crisis. I didn’t know it at the time, but I had picked the worst time to become an entrepreneur since The Great Depression.

Right now, the coronavirus/COVID-19 pandemic has the world in its grasp. Economists have warned about signs of an upcoming recession before, and they expect that this pandemic is the last straw.

Looking back at the last 100 years, recessions and crises happen regularly. Although no one knows when they happen, we do know that they happen every decade or so.

Every recession is different, but in general, we can assert that people lose their jobs, their homes, income is reduced, we spend less money, crises affect health, etcetera, when a recession or crisis hits.

We’ve also overcome every recession, and climbed back up. The question of dealing with a recession isn’t “How can I avoid it?”, but it’s about “How can I deal with it?” Lean in, and don’t count on luck alone.

You don’t need a PhD in economics to understand what happens in a recession. Let’s look at a metaphor:

In the next few sections, we’ll focus on different “boats” you can build as a software developer, or as someone aspiring to get into tech, and how you can get there.

Technically, a recession, crisis and market crash are distinctly different things. Throughout this article, we’ll refer to a recession as a “general, extended decline in economic activity.”

Imagine you’re a bookkeeper, so you do financial accounting for a living, and the year’s 2000. The Dot-com bubble is well underway, and you see tech companies go bankrupt left and right. Again, the shit is about to hit the proverbial fan…

What do you do? You learn to code. Your friends will call you crazy. Only an idiot is going to learn coding when software developers are losing their jobs. You respond: “Only an idiot stays on a sinking ship.” (A moot point, really. Only idiots stay away from all ships when one of ’em sinks.)

A year or so later, you’ve learned how to code web applications. With your knowledge of accounting, combined with coding, you’ve made an online bookkeeping platform for small businesses. And business is booming!

What bet did you make, exactly? You observed that the underlying principles of the Internet wouldn’t change. The Dot-com bubble was caused by speculative investments, not because the Internet was a bad idea. You saw how it could connect people, and transform the way we create software.

Sure, you had to cut back on expenses, invest time into learning how to code, and you were worried your bet wouldn’t pay off. You took a risk, that’s for sure. It might not have paid off.

Which is why you hedged your bet, too. Hedging simply means to reduce the risk of a negative outcome, while taking a position that can benefit you. In this scenario, you took a risk by learning how to code, but you padded that risk with secondary benefits:

Do you see where this is going? In times of crises, it’s smart to invest wisely. Instead of holding onto your hat, you let it go, because you’re going to lose it anyway. No one is stupid enough to stay on a sinking ship, but not everyone is smart enough to realize that the ship is sinking.

The anatomy of building a skill in a time of crisis, is to invest time now so you can turn a profit later.

And even if that failed, you would have proven to yourself that you’re able to invest in a time of adversity, a hedged bet, which is something you can do again, again, again, and again, until you find a skill that sticks.

What skill are you going to learn, next?

Just having a skill isn’t enough — you need to use it. That’s where the next pillar of surviving a recession comes in: build your projects and reputation.

Actively building something has 2 benefits:

What are you going to build? First, let’s define some categories:

Let’s start with that last category, because it’s the simplest. You can build something today – a tool, a script, an app – just for the sake of building. You inevitably gain experience that way.

You can do this regardless of a recession. In fact, you may need to, because you’ll face some downtime anyway. What are you going to do during downtime?

I’ve deliberately written “build something” here, because you really can build anything. When you’re about to start a project, don’t worry about monetizing or scaling or maintaining it. You can solve those problems later.

A few ideas for things you can build:

If you look at the 5 categories of projects you can build, you’ll see that they really start at building for the sake of building. The other categories are just add-ons. Services, B2B and getting hired are really just different verticals of building things. This is why it’s hard to get into something just for the money.

Speaking of money – how do we get from Raspberry Pi/Philips Hue hacks back to gainful employment? That’s where your reputation from building projects comes in. If you’re building projects, I recommend you to create an online showcase for yourself, and to find clients and/or employers by doing great work.

You can’t control the economy, but you can control what you build, and thus you have some influence over the reputation you create for yourself. If you showcase to others that you’re a reliable Builder of Things, they’re more likely to hire you.

You’ll need to apply, do interviews, get hired – this is a challenge in an economic recession, but less of a challenge had you done nothing at all. Meanwhile, you can pad your income a bit by doing individual sales of that app you launched in the App Store.

Which leads us to our 3rd fundamental recession-proof approach: assets.

A skill is an asset too, provided you can move it from a low- to high-yield environment. Your reputation is an asset as well, and so is the network of people you build while creating your projects.

If you showcase your work, and promote it, you’re likely to come across people who can amplify the benefits of your work – and that’s your network. If your app helps people, your network can help you help more people.

The cool thing about assets is that they appreciate over time. An asset has ups and downs, much like publicly traded shares in a company. You’ve got good days, when the share prices goes up, and bad days, when it goes down. In a recession, you’ve got a ton of bad days. But, stick ’em out, and the price goes up – provided they were good positions, in the first place.

Building a network isn’t as volatile as the stock market, but their principles are the same. Say you’ve built a project (for free), and you promoted it, and someone saw it, and the recession is over, and they refer you to a company that’s looking for a new developer. That’s your skills, projects, reputation and network in action!

How do you build a network? You meet people, and you discuss your work. A few ideas:

Don’t worry – the above ideas also work when your country is in lockdown because of a virus epidemic. The dynamics may change, but you can meet people online, organize online conferences, and share your work that way.

Mindset Shift: A for Adversity

Yes, this 3-step approach to survive and thrive in an economic recession is going to take effort. It’ll take more effort than you anticipated. Instead of driving to work, you’ve lost your job, sold your car, and you’re stuck at home watching how-to videos about iOS development. It sucks!

It’s going to get better, and it’s going to get worse. Economic recessions are like that, and that’s OK. Your only mistake was thinking stuff would stay OK forever. Next time, an economic downturn won’t mean a personal downturn for you, because you’ve learned something new today.

The cool thing is that the strategies that we’ve discussed today work well in good times, and in bad times. You’ll get better at assessing and creating opportunity, regardless of whether the market moves in your favor.

Adversity is a great teacher, because it helps us grow. When you stagnate, you don’t grow. Chaos, adversity, entropy, suffering, a decline into disorder – that’s here to show us one thing: get a move on.

Awesome! We’ve really gotten somewhere, haven’t we? In this article, we’ve walked through the 3 pillars of making something of yourself when the shit has hit the fan. Here’s what we discussed:

How To Beat The iOS Coding Interview