Home » App Development » Getting Started With Realm Database In Swift

Written by LearnAppMaking on February 20 2019 in App Development, iOS 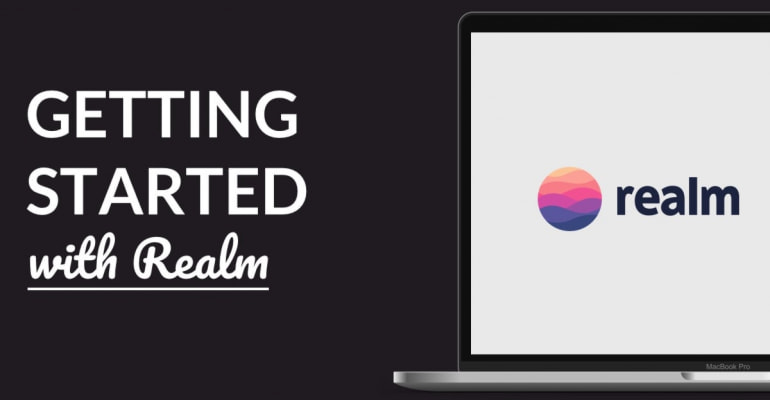 Realm is an easy-to-use database framework for iOS and Swift. In this tutorial, you’ll learn how to get started with Realm Database in your own iOS app projects.

We’ll discuss how Realm works, how you can use it in your iOS projects to save and retrieve data, and how Realm is different from the more conventional database tools for iOS.

Realm is a powerhouse when it comes to managing databases, and as you’ll see, it’s convenient to use together with Swift. It’s an especially fine choice for local-only databases, although the Realm Platform has everything you might need from a synchronised, cloud-based service.

Before we write some Swift code, let’s discuss what Realm Database is. Realm is a database library (and platform) for iOS, Android and the web. It’s a compelling alternative to SQLite and Core Data – tools that are commonly used in practical iOS development.

This tutorial focuses solely on the open source Realm Database, although the code discussed here can also be used with Realm Platform.

Realm is a database, so you can use it to store and retrieve data objects in your iOS app, in a structured manner. The database is persisted between app launches, so it’s perfect for long-term object storage.

We can describe the above structure with a Swift class, like this:

A database can contain many instances of the above User class, just like the aforementioned spreadsheet has four data entries.

What’s so interesting and convenient about Realm is that you can work with database objects as actual Swift objects. Unlike Core Data, SQLite and Firebase, you don’t have “map” objects or rows returned from the database to Swift objects. Realm does this for you – you can just drop a Swift object in a Realm database, and when you query objects, you get that same class right back.

Installing Realm in your project is straightforward. For the complete instructions, please check out the Realm Documentation. Here’s the short version:

Realm data models are nothing more than regular Swift classes, with regular properties. In our hypothetical app, we’re going to save notes, with the following class:

The above class defines 4 properties. Every property has a default value, and the types of these properties are inferred by Swift (Int, String, Date, String respectively).

Here’s how you’d create an instance of the Note class:

This Note class can’t be used with Realm rightaway, so we’ll have to change it a bit. Like this:

Whenever you work directly with the Realm library’s classes, don’t forget to import RealmSwift at the top of your Swift file!

In most database environments, you also want to uniquely identify objects. How do you know if two Note instances refer to the same underlying data? In our hypothetical Note class, we’ll use the property id to give each note a unique identifier. When the id property of two Note objects are the same, they’ll refer to the same Realm database object. That way we can update, change or overwrite them.

Realm needs to know which property we want to use as a unique identifier. We could use id, but also title, and even the note’s creation date. Here’s how we tell this to Realm:

The primaryKey() function is added to the Note class, and overridden from its superclass implementation. The only thing we do inside the function is return a string "id", which contains the name of the property that uniquely identifies a Realm data object.

OK, now that the Note data model is in place – we can finally store and retrieve stuff in Realm!

Data models in Realm can get much more complex than this, with optionals, arrays with List, custom getters and setters, indices, ignored properties, and complex data types. Most of that is configured right in your data model! You can read more about that in the Realm Documentation.

Writing data to a Realm database is straightforward:

Let’s discuss the principles implied here. We’ve already discussed data models in the previous section. The Realm environment has another important component, the Realm itself.

Technically, a Realm is an instance of a Realm Mobile Database container. In reality, it’s a .realm file that stores database objects. It’s easiest to regard a Realm as “the database”.

An app has a default Realm, and you can create additional Realms as you see fit. Realms can also synchronize with the cloud-based Realm Platform. We are just going to use the default, local Realm.

Before you can read from or write to the database, you’ll need to get a reference to a Realm instance. Here’s how:

In the above snippet, the let realm = try Realm() code instantiates the default Realm and assigns it to the realm constant. We also use Swift error handling to catch any errors that might arise.

It’s worth noting here that …

In Realm, any change to the database must be done in a so-called write transaction. This includes newly created or added objects, updates to objects, and deletions.

Let’s say that your app user has created a note in the app, and wants to save it. We define the following note object:

Just like before, we get a reference to the default Realm:

Finally, we add the note object to Realm in a write transaction:

What if you want to add multiple objects to Realm? You can do all of that within the write { ... } block, but in some scenarios that’s impossible.

In the above code we’re iterating over an array of strings called notes, adding each of the strings to a Note object, and saving that object in Realm.

Working with a write transaction this way effectively “opens the gates” for the new objects, then marks the transaction as complete, after which the data is written to the database.

Keep in mind that opening and closing the transaction needs to be balanced, i.e. you shouldn’t call beginWrite() without also calling commitWrite() at some point.

Updating and deleting objects works the same way. Consider that we want to change the text property of a previously saved note object, and save that change in the database. Here’s how:

Likewise, objects can also be deleted from the Realm database:

Awesome! Let’s move on, and discuss how you can retrieve objects from Realm.

Getting Data From Realm Database

Imagine that your app’s user has created 10 notes in the app. All of these notes are stored in the Realm database. You want to display these notes in a table view. How do you retrieve the Note objects from Realm?

Retrieving data from Realm is done with a query. A query essentially encapsulates the information that’s needed to retrieve objects. A few examples:

To get all notes from Realm, we simply do this:

Iterating over the collection is as simple as:

A few things are important to note here. First, the type of notes is Results. This is a generic collection type from Realm. It functions similarly to an array, i.e. you can iterate the collection’s items, but there’s more:

Querying Realm objects and working with Results is powerful, and it gets more complex from here on out. A few other things Realm can do are:

We’ve only barely scratched the surface of what Realm can do – it can do much, much more. Especially when you consider their cloud-based Realm Platform, and Realms offline-first synchronization approach.

What makes Realm so compelling is that there’s little syntactical overhead in dealing with the database itself. Objects you store in the database are just Swift class instances, and what you get back are those same objects. Neat!