Written by LearnAppMaking on July 29 2020 in App Development, Swift 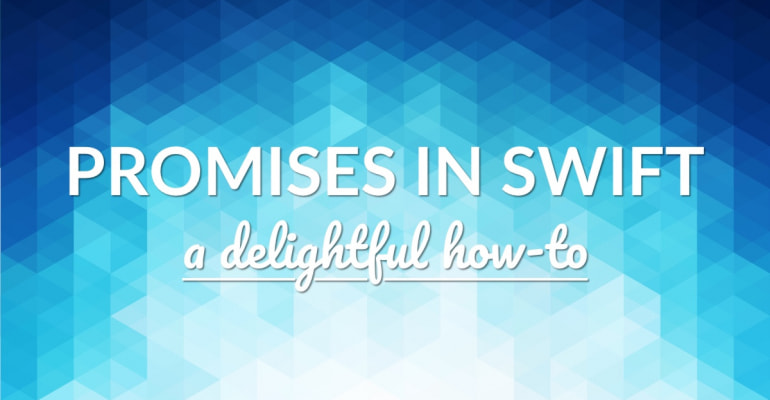 Promises in Swift simplify your asynchronous code. Instead of “callback hell” you create a concise chain of functions, and keep your code clean. Let’s find out how!

In this tutorial you’ll learn how to use promises. We’ll use PromiseKit, a great library for iOS written in Swift. Promises are part of good app architecture.

Why should you use promises? Let’s take a look at some Swift code:

What happens in this code?

The above code example is effective Swift code, but it’s neither elegant nor readable! What’s wrong with this code?

We’ve created a “pyramid” of brackets. Most of what happens in our code is indented on a new level. The most important part of the code is hidden away on the deepest level. It takes some reading to figure out all that this code example does, is print a bunch of JSON…

The code has two checks for errors. Three if you count if let data .... Imagine what happens when you extend that code with more functionality. Every time you clear the path forward – no HTTP errors, no JSON errors, no data errors – you indent one level. This makes your code progressively unreadable.

The example just makes one request. What if you want to make subsequent requests? Your code quickly becomes an entangled mess. And when you make requests in serial, that could have been parallelized, you’re writing underoptimized code. You’d end up with something like this:

You get the point. The code is hard to read, because you constantly have to step down into the next indent. The inner async HTTP request is obscured from view. You’re likely going to make a mistake. Chances are you’ll forget what the code does altogether. Not good!

Let’s bring in promises! This is what the previous Swift code example now looks like:

Much better, right? This is what happens:

The example above is called a promise chain. You literally chain multiple promises together, which greatly improves your code readability.

Promises, and their cousins called Futures, get their name from the fact that they promise to return a result in the future. With promises, you’re providing a bunch of closures to a resolver, which fires them off one by one.

The resolver decides what to call next, and optionally catches errors regardless of where they happened in the chain. A key concept is that promises parallelize asynchronous requests and abstract away the asynchronous nature of the code.

Let’s deconstruct promises a bit further. This is a typical promise chain:

This is how it works:

There are three key points to understanding promises.

What’s so exciting about this? Don’t forget that this is all asynchronous code… Even though the login() and fetch() functions take an arbitrary amount of time to complete – you’re not sure when – you can code them as if they happen one after the other! Paradoxically, promises can synchronize asynchronous code.

How to Make Promises with Swift

OK, let’s dive in even further. What if you need to create your own promises?

PromiseKit has extensions for most iOS SDKs and popular libraries, so you can use them with promises out of the box. For instance, in the first example we used the PromiseKit extension for Alamofire.

So far, you’ve only used promises. You can also create your own promises. You do this when you’ve written your own networking code, lengthy custom task, or use an external API that you want to wrap with promises.

In most simple cases you can use PromiseKit’s wrap function, like this:

In the above example, download is the asynchronous closure you want to use in your promise. Its result is of type String and PromiseKit automatically picks up on errors when it can.

PromiseKit has a number of generic wrap() functions that can automatically resolve asynchronous functions as promises.

In the above example, the asyncTask function is called with a closure as a completion handler. This is how you would typically code an asynchronous task, before using promises. The download() function returns a Promise, which is expected to return a value of type String.

PromiseKit needs to know when the asynchronous code has completed executing. In the example code you see one call to seal.fulfill() and one call to seal.reject(). This is the code that resolves the promise.

You rarely have to write your own promise resolving code. When in doubt, check the PromiseKit repository for extensions for your favourite SDKs or use the wrap function.

Multiple Concurrent Tasks with “when”

This is so much fun! One last thing… What if you want to use multiple concurrent asynchronous tasks? For instance, saving a photo and uploading it to your webserver.

A typical way is this:

Doing it in parallel, i.e. saving and uploading at the same time, is even more complicated than the above code.

With the when function you define multiple promise handlers. The next then is only executed when these promise handlers resolve. When an error occurs in any of the promises, the catch handler is invoked – just as with any other promise.

So, in the above example code, both savePhoto() and uploadPhoto() are started at the same time. The then handler is executed when both tasks are completed, and it’s even provided the return values for those closures.

That’s nothing short of amazing!

Promises are one of the best ways to deal with complex asynchronous code, but there’s an even better way: async and await. Promises and async/await are related. Unfortunately, async await syntax is not yet available in Swift.

Here’s how async and await would work in Swift:

See what’s going on here? The 2 functions that do most of the work, i.e. saving and uploading a photo, are market with async. That’s because they’re asynchronous: their result isn’t returned immediately in sync.

The processPhoto() function includes calls to the 2 functions, and they’re marked with await. It’s like saying to Swift: wait for the result of this asynchronous function call. This won’t make the code synchronous; it’s all still async. You can code it, however, as if it’s all line-by-line synchronous code.

See the similarities with promises? Both approaches untangle async code. In fact, the code behind async/await is based on the same resolver mechanism as promises. The beauty of the async/await functionality is that you can abstract 99% of that away and make async code concise and insightful.

Right now, async/await won’t work in Swift. As of July 2020, discussions about async/await in Swift have flared up in the Swift forums. Chris Lattner and the Swift core team are committed to creating a better foundation for async/parallel programming with Swift – and it appears async/await is a promising candidate…

Async/await is the default way of working with asynchronous programming in JavaScript (ES-262). JavaScript is a popular language on the web, and it’s similar to Swift in many ways, so I imagine this is where the idea for async/await in Swift originally came from. There’s only so many ways to slice a cake…

So, promises. Now you know! See if you can use them in your next project, because they greatly reduce the complexity of asynchronous programming while improving readability.

You learned how to use promises, what problem they solve, how to create your own promises, and how to work with the various syntaxes like firstly, then, catch and when. Nice!

Make sure to check out PromiseKit and their Getting Started guide. The Common Patterns and FAQ wikis are informative, too. You can usually find a PromiseKit extensions by simply Googling for “promisekit [sdk or library name]”.

Why App Architecture is Important