Home » App Development » How To: Pass Data Between Views with SwiftUI

How To: Pass Data Between Views with SwiftUI

Written by LearnAppMaking on February 18 2021 in App Development, SwiftUI 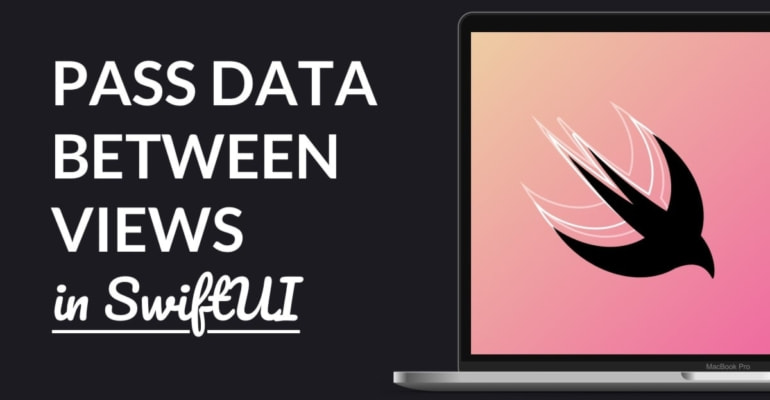 How do you pass data between views in SwiftUI? If you’ve got multiple views in your SwiftUI app, you’re gonna want to share the data from one view with the next. We’re going to discuss 4 approaches to do so in this tutorial!

This tutorial is the SwiftUI counterpart to my original UIKit-based Pass Data Between View Controllers tutorial. Give both a try, and compare the approaches!

Passing Data between Views with a Property

The simplest approach to share data between views in SwiftUI is to pass it as a property. SwiftUI views are structs. If you add a property to a view and don’t provide an initial value, you can use the memberwise initializer to pass data into the view. Let’s take a look at an example!

This is the view we want to pass data into:

See how the BookRow view has a property book of type Book? This property does not have an initial value. As a result, an initializer init(book:) is automatically created for us; it’s the memberwise initializer.

Here’s how to use it:

In the above code, which is part of a SwiftUI view, we’re creating a List view. This List iterates over the books array, creating a BookRow view for each Book object in the array.

Inside the closure, for the list row’s content, we have access to the “current book” in the iteration. This Book object is passed into the BookRow view, as a parameter for its initializer. That’s all there is to it!

What’s so special about this approach? Nothing, really. And that’s exactly what makes it so powerful! You may be tempted to find a clever worflow for sharing data between SwiftUI views, but the simplest approach is often the best.

Pass Data between Views with @Binding

Note: Just as in the previous section, the data is passed into the view using the initializer! This is the starting point for (almost) any sharing of data between views; the rest is up to property wrappers, Combine, modifiers, etcetera.

In the above code, we’ve created a view with a Toggle UI element. It has a label, “Living room lights”, and is passed a binding $lightsAreOn. This binding is the projected value for the lightsAreOn property, which is automatically added to it by the @State property wrapper.

It’s easiest to see this as a connection between the lightsAreOn property and the Toggle view. Whenever the state of one changes, so does the other. When you flick the toggle to “On”, the value of lightsAreOn becomes true, and vice-versa.

Now that the lightsAreOn property is marked with @State, the view that this code is a part of will become dependant on the state of lightsAreOn. In other words, when the value of lightsAreOn changes, the view will update to represent the new state. This is a core principle of SwiftUI; state drives the UI.

Here’s some code to demonstrate that:

In the above code, the value of lightsAreOn is used to put some text in a Text view. Because of @State, whenever that boolean changes, the view reloads and the appropriate string is subsequently shown in the Text view.

Internally, the Toggle view has a property of type Binding<Bool>. It could look something like this:

You can bind to property wrappers that expose a binding through their projected value. For example, every property marked with @State provides a binding via $property name.

You can, of course, create your own views and properties that use the @Binding property wrapper. Using @Binding to share data between views that way is quite powerful, because you and observe and change data without actually owning that data.

So far, we’ve looked at passing a single piece of data into views (and back) with @State and @Binding, and by using properties on views. But what if you want to share the same object with multiple views? That’s where @EnvironmentObject comes in.

Think of environment as a space for data, separate to the view. This environment is shared between views and their descendants (subviews), which makes it perfect for passing an object down into a hierarchy of views.

In the above code, we’ve created a DetailView struct. It’s got 2 simple Text views that display some data from a Book class. That object comes from a property book, which is wrapped by @EnvironmentObject.

When the DetailHeader view is shown in your app, SwiftUI will look for an object of type Book in the view’s environment and assign it to the book property.

Just as before, it’s got 2 properties title and author. But unlike before, Book is a class now. It conforms to the ObservableObject protocol, and the 2 properties are marked with @Published. In short, this means that any changes to an instance of Book will now be emitted to subscribers, such as with @ObservedObject, which subsequently updates its view.

The view hierarchy for this app is as follows:

At the top level, we’ve got this App struct:

See the Book object? That’s the data we’re sharing with the DetailView, and its descendants, by using the environmentObject(_:) modifier. The Book object is passed into the view, and is shared with all its subviews.

If you look closely, you’ll notice that the Book object is injected into the environment at the top-level. The mid-level DetailView does nothing with it, and yet the object is passed into the DetailHeader view at the low-level. How is that possible?

It doesn’t matter if you “skip over” a subview; the object’s there in the environment. That makes using @EnvironmentObject to share objects between views quite useful, because you don’t have to manually pass down an object, that you want to use multiple times, into each subview.

You can only pass one object per type into the environment, so we cannot pass 2 Book objects. When you do this, the first object passed with .environmentObject(_:) will be used. If you need to pass multiple objects, consider organizing your data models better, ex. use a view model with an array.

The @EnvironmentObject property wrapper is similar to @Environment (without “Object”) and .environment(_:_:). You use them to set objects based on the keys from EnvironmentValues. This allows you to get/set common values in the environment, such as .managedObjectContext, accessibility features, color scheme, locale, or the presentation mode.

Pass Data with @ObservedObject and ObservableObject

Last but not least! The mighty ObservableObject protocol. This approach to share data between SwiftUI is the most complex, and the most powerful.

In short, you use objects that conform to the ObservableObject protocol, in combination with the 3 property wrappers above, to observe and publish data changes to views that depend on that data. You can also bind to their properties.

In the above code, we’ve marked the book property with the @ObservedObject property wrapper. We’re using the same Book class as before, so it conforms to ObservableObject and publishes changes for properties marked with @Published.

You pass a Book object to the DetailView as you would any other property:

When the data for the Book object changes, the DetailView will update itself because it depends on that object. The Book object is pretty static in the above code; you use @ObservedObject for data that’s created and changed elsewhere in your code.

We’ve already discussed @EnvironmentObject; which deals with the view’s environment. You use @StateObject for objects that are created locally in a view, like this:

In the above code, we’re initializing a Book object locally inside the NewBookView. We’re using bindings to connect the TextField with the properties from the book object, which will set their values when the text field changes (and vice-versa).

You could argue that, once you forget about building User Interfaces, sharing data is all that SwiftUI does. You’ve got state and UIs, and that’s it!

So it shouldn’t come as a surprise that SwiftUI has syntax and tools that make sharing data between views easier, but it isn’t always clear what approach you should use. In this tutorial, we’ve discussed 4 approaches to pass data between views.

Here they are once more: