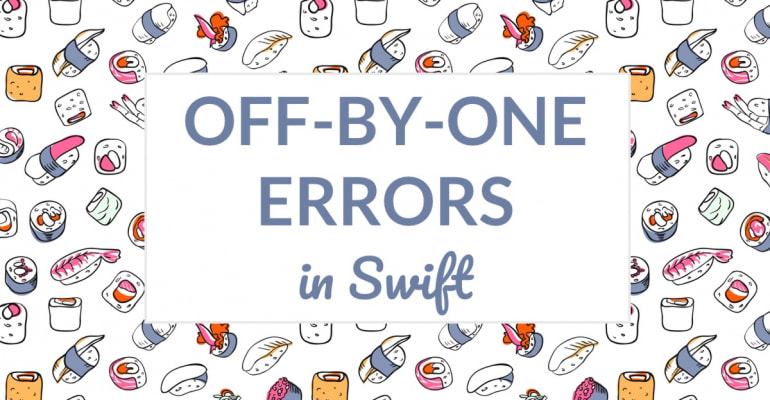 Off by one errors happen in programming when we’ve got the boundaries of things wrong. In this article, you’ll learn what an off-by-one error is and how you can solve it with Swift programming.

A popular quote from Jeff Atwood, author of Coding Horror, is this:

Off-by-one errors (OBOEs) happen when a loop iterates one time too many, or one too few. These errors can also happen when an array is zero-indexed, and you assume that it starts at 1. An off-by-one error is considered a boundary problem, that is, a problem that occurs around the boundaries of a set of data.

Let’s take a look at an example. Imagine we’re working on a bit of code, and we want to create a loop that iterates some code exactly 5 times.

Run the above code. What happens? For some reason – accidentally or otherwise – we’ve erroneously started counting our loop at 0. Because we’ve used the closed range operator ··· with 0 and 5, our loop iterates from 0 to 5, including 5. As such, the number of times the loop iterates is… 6!

It’s not likely that you make such a mistake deliberately, so the code example is a bit contrived. Consider however what happens to the loop when you change the following bits of code:

The way Swift implements for loops, with for in, actually prevents us from easily making off-by-one mistakes. The default 1...5 syntax follows natural language: a loop from 1 to 5 — in my mind, that’s 1-2-3-4-5.

But, check out how the above code works for programming languages with C-style loops:

The above code runs exactly 5 times, printing out the numbers 0 to 5 (including). However, if you change < into <=, the loop runs 6 times. When you accidentally start at 1, the code only runs 4 times. It’s easy to make a typo, right? That’s the nature of off-by-one errors!

Let’s check out another example, with a while loop in Swift:

As a result, the printed values of i are 2-3-4-5-6. The loop runs 5 times, but the loop’s values are completely different from what you’d expect!

But what happens when you need to use the index or ordinal number of the iteration? That’s where off-by-one errors happen with arrays.

Let’s take a look at an example.

In the above code, we want to iterate over an array of strings. The goal is to print out every name in the array by using the array index i. Smart as we are, we’ve figured out that we can get the number of items in an array with the .count property. However, there’s an off-by-one error in the above code!

The loop repeats one too many times. As a result, when you run the above code, you’ll get a Index out of range error. The index number 5 does not exist in the array, because the array only has indices 0-1-2-3-4.

How can we solve this? In one of two ways:

This off-by-one error for arrays is often called the fencepost error, which we’ll discuss next.

Here’s an interesting question for you:

If you build a straight fence 30 meters long with posts spaced 3 meters apart, how many posts do you need?

This is called the fencepost error. It’s based on the idea that sometimes we count the posts in a fence, and at other times, we count the sections of fence themselves.

Another example involves making a hotel booking. You’re checking in on Monday, and checkout happens on Friday. How many days and nights are you staying?

5 days, 4 nights. Monday to Friday equals 5 days (sections) and 4 nights (fenceposts). You’re always charged per night in a hotel. Consider that code you wrote accidentally counts the days from Monday to Friday, and you end up charging one “night” too many!

The fencepost problem illustrates that off-by-one errors always concern the boundaries of things, and where those borders are. If we go back to that array of names, we assert that, when an array starts at index 0, its last index is length - 1. When an array has indices from m to n inclusive, the size of the array is n + 1.

How do you solve off-by-one errors? It’s important to establish a starting point or convention, first.

Then, you can build awareness around syntax that concerns boundaries:

Based on those principles, you’re equipped to tackle any off-by-one error that comes your way. Does your code accidentally skip the last item in an array? Are you trying to access a post-last array item that doesn’t exist? Is the outcome of your algorithm always off by one? Check the above syntax and principles, and chances are that you’ll find that off-by-one error.

In this article, we’ve discussed a common cause of bugs in programming: the off-by-one error, or OBOE. As it turns out, it’s easy to accidentally incorporate this bug into your code. Fortunately, it’s quite easy to solve, too. Awesome!

And of course, we can also just joke around, admit that we make mistakes, and remind ourselves that off-by-one errors just happen:

There are two kinds of people in the world. 1. People who understand off-by-one errors.