Written by LearnAppMaking on July 16 2020 in App Development, iOS 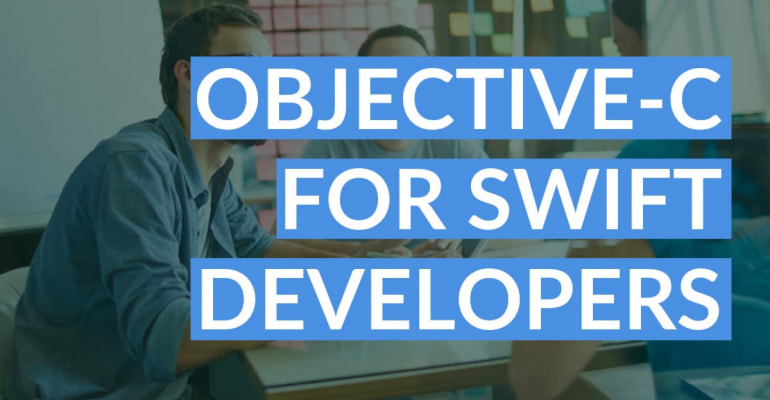 Is Objective-C officially dead? If you look at the rise in popularity of programming language Swift since 2014, you’d most certainly think so.

Swift is easier to learn than Objective-C, it has a powerful syntax and it’s widely used for iOS, macOS, tvOS, watchOS and iPadOS apps. Swift is open source and supported on Linux and Windows (5.3-6), which means it has the power to break free from the Apple ecosystem.

Has Swift replaced Objective-C? Absolutely not! A beginner app developer’s language of choice is Swift for sure, but it pays dividends to get smart in Objective-C as well.

Objective-C is still widespread in:

You can bridge Objective-C with Swift, of course. With a Bridging Header you can tap into any Objective-C codebase, and code Swift without ever looking at its Objective-C origins.

An example of where that could go wrong is the ParseUI framework, a wrapper around the Parse Server for iOS SDK that couples nicely with UI components such as table views and collection views.

What if you get stuck and need to inspect the original source of ParseUI, in Objective-C? You’d stay stuck if you don’t know Objective-C!

It’s smart to code in Swift, and know your way around Objective-C, enough to get around. That’s why I wrote this tutorial: to help you, as a Swift developer, to get to know Objective-C better.

Objective-C was created in the early 1980s, and became part of Apple’s Mac and iOS platforms when Apple acquired NeXT, the company Steve Jobs founded when he left Apple in 1985. NeXT had licensed Objective-C from its creators, Brad Cox and Tom Love, from the company Stepstone.

When coding apps you’re still occasionally reminded of Apple’s past. The “NS” prefix some Cocoa and Cocoa Touch classes have is an abbreviation of “NeXTSTEP,” the operating system NeXT built. In Swift, most of these prefixes are gone. Behind the scenes, they’re still there though!

It’s also fascinating that Interface Builder’s inception, now part of Xcode, coincided with the creation of NeXTSTEP and Objective-C. Xcode itself was created much later, in 2003, and it was based on Project Builder – again, made for NeXTSTEP.

Just like in our age, where Instagram is now part of Facebook, Steve Job’s NeXTSTEP acquired many of its surrounding technologies. The same is true for Apple and even for Swift, which has moved into verticals like machine learning and computer vision.

Author’s Note: I started coding iOS apps in 2009-2010, with Xcode and Objective-C. Back then, iOS was called iPhone OS. I learned how to code for the first time long before that, as a teenager, with BASIC and Visual Basic. It’s a reminder to learn first principles, because technologies constantly change. Don’t worry too much about what’s popular, and invest in helpful learning techniques.

First things first. What is programming? It’s telling a computer what to do. It’s an ordered list of commands – the code lines that make up a software program. The computer, or iPhone, will execute all lines of code after one another.

Programs used to be procedural, for which lines of code are executed one by one. A typical statement for procedural programming languages is GOTO, which took the program to an arbitrary line of code, or gosub, which would take your code into a subroutine. Subroutines are like functions: individual blocks of code that take input and make output.

OOP is a way of programming which divides programming code in classes and methods. Classes are structures for your code, as you’ll see next.

What’s interesting here is that programming languages borrow features from each other. There’s a parallel with Swift here, because Swift was partly inspired by functional programming languages like Haskell. In fact, Swift is slowly crossing the chasm into Linux and Windows environments – like Objective-C from NeXTSTEP to Mac, back in their day.

It’s all a mashup anyway!

The Valet Program in Objective-C

In it, Neo (Keanu Reeves) “exits” our physical world to be reborn in the actual “real” world. The premise of The Matrix is that we all live in a computer simulation, and that people, events and physical things are controlled by computer programs.

Take for instance The Valet Program, that’s out here in our computer world. Whenever you go up to The Valet, he takes your keys and parks your car. When you return, you get back your car and drive away.

We’re going to write a small program that makes up the actions The Valet Program does. We’ll be working with two different files, called AppDelegate and Valet.

The AppDelegate is our “starting point”, it’s what the iPhone loads into it’s memory when we start The Valet Program. The Valet holds the actions, memory and logic for the program.

Fun fact: SwiftUI has the potential to retire the “App Delegate”, with its SwiftUI App and App protocol.

The code that creates the valet, and makes it run, is this:

In the code, this happens:

In Swift, the same code is this:

Can’t get your head around an instance and a class?

Think of it like architecture. You have a blueprint of a house, that’s the class, and a house that the workers build: an instance.

The blueprint defines where the walls, doors and windows of the house are, but you can’t live in it! That’s what you need the actual house for, the instance of the class.

In the Objective-C example, the way of coding (called syntax), with the square brackets, is very unique. It’s called a messaging system. It’s the Objective-C way of telling objects what they should do.

Let’s break down the above code sample a bit further. The following line …

… is identical to this:

Do you see that instead of writing alloc and init on one line, they’re now separated on two lines of code?

This is what it does:

So what about that pointer?

Picture the iPhone’s computer memory in your head like a city. Each memory block has an address, like a house. In each house you can store 1 object.

We’ve just stored an instance of class Valet in variable valet. We can retrieve our object later, because we know it’s name valet. The iPhone memory however stores it under a different address, like 0x00ad6f88.

We can’t write our program with names like that! It’s too complicated. In order to work with readable names, we create a pointer. Our name valet points to 0x00ad6f88 for the computer, which in turn is the address for the actual contents of the object. The contents can include the valet’s name, how many cars he’s stored and the time he can go home. So, a pointer is a reference, a readable reference for us, and a memory address for the iPhone computer.

So, what’s the big difference between the two Objective-C code samples above?

No difference at all. But why do we write them differently and which is better? The first one, because it’s shorter. We utilize the messaging system of Objective-C to “chain” the results of methods to one another.

Picture this: you’re waking up and then making breakfast. First we create an object called you, and then we do this:

As you can see, we’ve used several instance methods to get from bed to a full stomach. We assign to the variable you temporarily, so we can save the results of each of your actions. Each time we write = and perform an action, it overwrites the previous action.

This doesn’t mean you did all of that at the same time. No, all methods are still executed in after one another. However, we’ve chained all the results.

In the first code sample we’ve stored the result of each of the commands inside you with the assignment operator. In the second sample we’ve omitted the equal sign and put it all in one line, all held together by square brackets. The result of a method is used as the basis for the next, without storing it in a temporary object (like you = ...).

In Swift, the first code sample would look like this:

The more condensed way of coding, in Swift, is this:

Interestingly, that’s not much different from the functional programming style used nowadays in Swift and SwiftUI:

You can clearly see the differences between Objective-C syntax and Swift syntax. Objective-C calls methods and properties with those square brackets [ ], whereas Swift uses dot-syntax.

The most significant difference between Objective-C and many other languages, including Swift, is this []-style messaging syntax. Of course, the syntaxes differ in many more ways, but it’s a relief to know that the worst is behind you now!

Alright, let’s put all that Objective-C to good use. We’re going to write some hypothetical, working Objective-C code.

First, we used two files: a header file and an implementation file. The header file is used to declare our class, which means that we tell the iPhone which objects, methods and so on we’re going to use inside our class Valet.

As you can imagine, an object can store objects (kind of like sub-objects) inside itself. That’s the whole deal with Object-Oriented Programming!

The implementation file is used to write out the things we declared in the header, so the contents and logic of our code.

If you compare it to a cooking recipe, the header would be the ingredients list and the implementation the steps to cook the meal.

A header file has the filename extension .h, an implementation file the extension .m. If you want to use a class you’ve coded in another file you have to import that class at the top of the file, with the #import keyword.

Moreover, you have to “link” a header and implementation of the same class by including an import for the header file in the implementation file, like #import "Valet.h" in Valet.m.

In Swift you don’t have separate header and implementation files. Any Swift class is just saved in a .swift file. Moreover, you typically only have to import external frameworks and libraries with the import statement. In Objective-C you have to import pretty much every file or class you want to use.

Breaking Down The Code

Got it? We’ve declared one property called name and one method called run.

Now, for the implementation file Valet.m.

Note that in Objective-C string literals like @"Steve" start with an @-sign. In Swift, you just write "Steve".

Remember we started with the AppDelegate? The code we used was:

As you can see, something’s missing, it should be:

The output of this code, when used in conjunction with the class Valet we wrote, is:

The Valet Class in Swift

The Valet class in Swift is surprisingly simple…

Like before we’re declaring a class called Valet. It has one initializer init(name:String) that takes parameter name and assigns it to the property self.name. When the method run() is called, it prints out "Running valet with and the value of name.

Easy, right? Now you understand why it’s smarter to learn Swift compared to Objective-C, although it’s even smarter to know a bit of Objective-C next to Swift.

Hooray! These are the basics of Objective-C programming. Most Objective-C from here on out is based on what you’ve learned in this tutorial. It might seem like a lot to comprehend, but now you know that this is it.