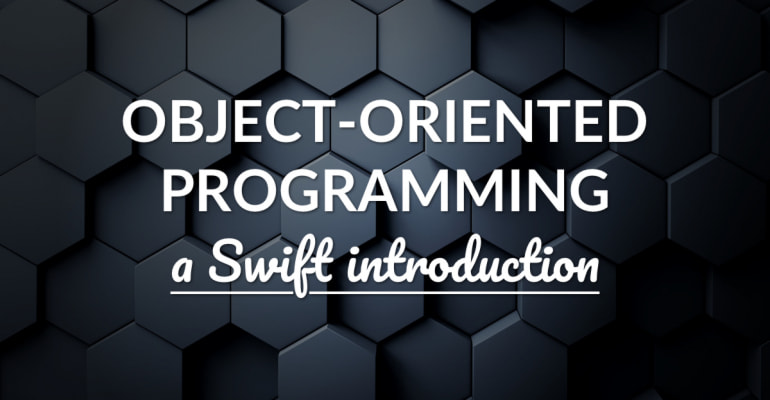 Object-Oriented Programming (OOP) helps you structure your Swift code with so-called classes. These classes have properties and functions, and classes can inherit attributes from each other.

OOP in Swift: Classes and Instances

Let’s start with the most important aspect of Object-Oriented Programming: classes. They are the building blocks of your code.

Here’s an example of a class in Swift:

Inside the squiggly brackets you can define properties and functions, that belong to this class Car. You can see a class as a structure for code, like a toolbox that contains a screwdriver, wrench, hammer and drill.

In Swift, you can create instances of a class. Like this:

You can now pass that instance of Car around in your code, just like any other value. The class Car is the type of ferrari, much like a variable score can be of type Int.

You can create as much instances of one class as you want. That’s the power of Object-Oriented Programming! You create the Car class once, and then use it to create an entire garage of cars. This is called code reuse, and it’s a staple in practical iOS development.

Instances of a class are often simply called objects.

It can be challenging to visualize abstract concepts like classes and instances. Let’s make an analogy:

A building isn’t an exact copy of its blueprint. It’s just a live representation of the blueprint, with windows, doors, a roof, etcetera.

When coding your app, you’re building an entire city by using a great number of blueprints. Some of these blueprints are provided by the “government” (i.e., Apple’s Cocoa Touch SDKs), such as the blueprint for a standard fire station and train station. Other blueprints are designed by you, the architect.

Your city is not just a pile of blueprints. You create instances of these blueprints: the actual buildings! And you create the blueprint for an apartment complex once, and then use it to build apartments all over the city.

Makes sense? Let’s move on to the next aspect of Object-Oriented Programming: properties and functions.

Swift has another important building block: structs. Structs (short for “structure”) are similar to classes, with a few exceptions: structs cannot be used for subclassing, and they are value types. Swift favors structs over classes for simple data types. You can learn more here: Struct vs. Class In Swift Explained.

Properties and Functions in OOP

A class can define properties and methods.

Do you see how a class structures information and tasks in your code? The class “wraps” variables and functions that belong together.

A method is a function that belongs to a class, but for the sake of simplicitly, we’re just going to call them functions.

It’s important to note that, in the above code, the wheels and maxSpeed properties are declared at the class level. They’re added right within the squiggly brackets of the class body.

The big difference, of course, is that these properties belong to a class. Every instance of the class Car will now have the properties wheels and maxSpeed.

And we can create a slower All Terrain Vehicle (ATV), like this:

That’s pretty cool, right? You use dot-syntax to access properties on an object, such as ferrari.wheels. Most properties can be read from (called getting) and written to (called setting), unless otherwise specified.

Want to learn more about variables? Check this tutorial: Variables and Constants in Swift Explained.

OK, now let’s continue with functions. Everything we’ve done with properties so far, applies to functions too. When a class declares a function, that function is available on every instance of that class.

In the above example we’re declaring a function drive() on the class Car. It prints a simple line of text to the Console when the function is executed.

You can now call that function drive() on the Car class with the same dot-syntax. Like this:

Want to learn more about functions? Check this tutorial: Functions in Swift Explained.

You now know that Object-Oriented Programming is used to structure your code in classes. A class can have properties, to store information, and functions, to execute tasks.

Let’s say we’ve defined a simple class called Vehicle. We can then create subclasses of Vehicle, such as:

See how each of these subclasses is-a-kind-of vehicle, and also define some attributes of their own? That’s what subclassing and inheritance is about.

Here’s the gist of it:

The principle of inheritance enables you to create hierarchy in your code, and helps you reuse parts of your code. It doesn’t make sense to copy the attributes that different kinds of vehicles share, when you can reuse them.

Let’s take a look at some code. Here’s the base class Vehicle:

Then, let’s create a subclass:

To see how inheritance works, let’s create an instance of Bus.

See what happens in the above code?

When you call the function drive() on the greyhound object, the overridden implementation is called. Like this:

The output is not Driving this vehicle!, because the function drive() is overridden by the subclass implementation of Bus.

A bicycle has pedals and a frame, whereas a bus has doors that can swing open. It’s not about the number of wheels, but instead about the attributes that classes in the hierarchy share with each other.

There’s more where that came from! Object-Oriented Programming stretches far and wide. Learn more about: protocols, delegation, extensions, generics to your heart’s content.

Try Object-Oriented Programming for Yourself!

Alright, let’s put what you’ve learned into practice! You can use the Swift Sandbox below to try out Swift code. Play around with classes, properties, functions and subclassing.

Object-Oriented Programming helps you structure your code. It enables you to reuse and extend code, without unnecessarily repeating yourself. Ultimately, that helps you to avoid bugs and code more productively.

Think about what the words “object oriented” mean. Object-Oriented Programming is quite literally oriented around objects. Instead of letting your code flow like a waterfall, you organize it in classes and objects, with their properties and functions. Much clearer!

Object-Oriented Programming is a fundamental topic in iOS development. OOP is literally everywhere, which makes it all the more important to master properly.