The Nil-Coalescing ?? and Ternary Conditional :? Operators in Swift

Written by LearnAppMaking on April 16 2021 in App Development, Swift 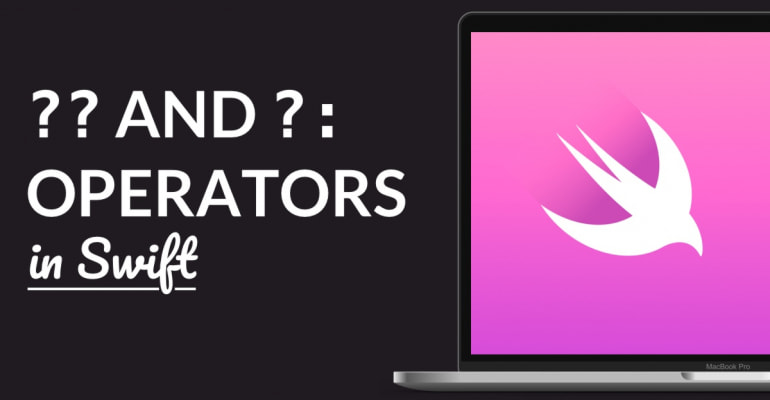 In this tutorial, we’re going to discuss how you can use the nil-coalescing operator and the ternary conditional operator in Swift. They’re both interesting bits of syntactic sugar, and they can help you write more concise, readable code. And that’s a good thing!

Let’s begin by discussing what an operator is, before diving into the nil-coalescing and ternary conditional operators.

An operator is a special symbol or phrase that you use to check, change, or combine values.

In short, we can use the addition operator + to add two numbers to each other with the expression 4 + 2. In Swift, we can then assign the result of that expression to a constant, such as with let number = 4 + 2. Just as in mathematics!

In the above code, we’re working with two different operators:

In Swift, we have 3 types of operators:

Alright, now that we know a thing or two about operators, let’s move on to the nil-coalescing operator and the ternary conditional operator!

Based on what we know about operators, we can assert that the nil-coalescing operator a ?? b is an infix binary operator.

In the above code, you’re getting your favorite for dinner – unless you have no favorite, then you’re getting fish and chips… Feel free to change the value for favoriteFood to a string instead of nil, and see how the output for whatsForDinner changes.

So, what do you use the nil-coalescing operator for? It’s useful in a few scenarios:

Coalescing means “to come together to one form or mass,” so you could say that the ?? operator merges an optional value with a default value to “come together” as a non-optional value. (I still think nil-splattering operator would have been a more awesome name…)

It’s a shorthand for a conditional with if-else, like this:

Let’s look at an example.

In the above code, we’re evaluating the logical expression temperature < 0. Is the temperature below zero or not? Based on this, we got two options:

The above code example is exactly the same as:

It’s clear that the ternary conditional operator, with a ? b : c, is much shorter than the above code. In many cases, you don’t even have to use the temporary value text, i.e. you can write the above code as print(temperature < 0 ? ... : ...).

The ternary conditional operator is most useful in scenarios where you have two options of equal “weight”, that you’re choosing based on a simple expression. It’s counter-productive if you try to stuff complex logical expressions into the a ? b : c format – in that case, it’s smarter to use a more verbose if conditional block.

Here’s the gist of what we discussed:

The Ultimate Guide to Operators in Swift