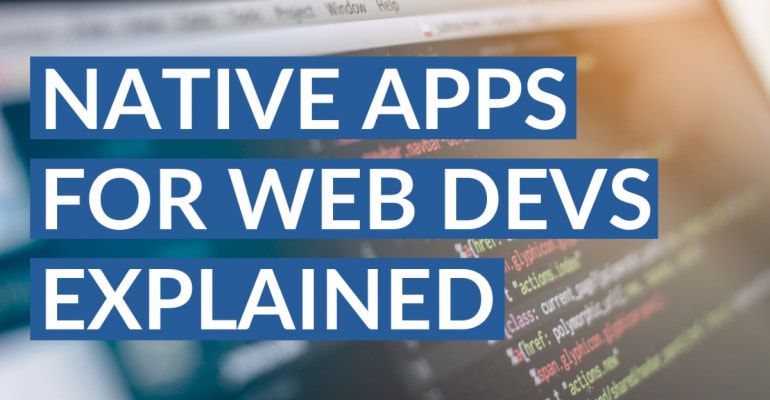 Want to get from web development into native iOS app development? Here’s what you need to know…

The gap between native development and web development is drawing closer. With tools like React Native and Flutter, progressive web apps and full stack Swift development, the web and native apps aren’t so different anymore. Or… are they?

In this article, we’re going to take a look at the differences and similarities between web development and native iOS app development. Especially when it comes to programming languages, tools and frameworks.

This article is particularly useful if you’re thinking about a switch from web development to native app development. It’s mostly written from a front-end web development and native iOS/Swift perspective.

Web vs. Native: A Side-by-Side

Let’s start out with a quick side-by-side comparison of web development vs. native app development.

1 Also languages that compile to JavaScript, like TypeScript, CoffeeScript, Dart.
2 This includes tools like Electron.
3 Platforms that run JavaScript or Swift, so not back-ends you can connect to.
4 These things change about once a week…

The first thing that stands out is: you can almost put “Any” in every Web Development column, because there’s so much choice!

The iOS app development environment and ecosystem is pretty monotheistic: there’s one platform, iOS, that you can build for with one IDE, Xcode, with one SDK, Cocoa Touch. For years you could choose from one language, Objective-C, but now most new apps use Swift. There’s a few package managers, most notably the official Swift Package Manager and CocoaPods. We used to have one layout system, Auto Layout, but since 2019 you can also choose SwiftUI. We all pretty much work with the same design/architectural patterns: OOP / MVC / MVVM (with the exception of Reactive Programming).

In recent years, there’s come more choice for iOS developers. If you’re sick of Xcode, you can choose to work with AppCode (from JetBrains). Objective-C was switched out for Swift, and is now the beginner’s language of choice. Reactive programming and stuff like promises came to iOS, as well as more elaborate framework-like libraries such as Texture for async UI rendering. The most recent entry – a superb UI framework – is SwiftUI. On iOS, Core Data, a long-time default for persistence and data modeling, got more nimble and agile competitors, like Realm.

A web environment is different than an Operating System’s environment. When coding apps for the browser, you almost never have to worry about memory allocation, or in which thread you update the UI.

JavaScript has a callback flow, i.e. function calls are executed in order once the main stack is empty. JavaScript handles asynchonous code very well, by design, with promises, async and await, but it doesn’t have bare-bones control of threads. All that is different on iOS.

Likewise, in a web app it’s fairly easy to make changes to the DOM and see them reflected in the web page. On iOS, changes to the navigation, layout, constraints and views all need to be made at specific points, with specific functions. In that sense, an OS environment like iOS is stricter and less forgiving than a browser environment.

Auto Layout, the most commonly used layout system for native iOS apps, has a predecessor: Autoresizing. With Autoresizing, you’d position a UI element in an position: absolute-like manner, and give it a few ideas on what to do if the screen size gets bigger or smaller, like “expand to the left”.

With Auto Layout, you position UI elements in a “relative” manner, mostly based on margins between items (called Constraints). Unlike CSS media selectors, Auto Layout can’t set specifics on minor screen changes, like a rotation from portrait to landscape. It can, however, distinguish between major screen changes, like the difference from iPhone to iPad (with Size Classes).

Perhaps the biggest difference in layout systems is that on iOS, views don’t wrap. When a view is too big, it’ll cap its size and clip (or overflow), but it’ll never jump further down the page until there’s room. Not until recently iOS developers got access to SwiftUI’s stacks, which allows subviews to stack on top of each other similarly to how flexboxes work.

Similarly – because there are distinct differences. Perhaps the only thing that’s truly the same is that all of these layout systems take some getting used to.

SwiftUI definitely changes the playing field for building UIs on Apple platforms. You create UIs with a declarative approach, similar to React, and in a way, even similar to HTML/CSS. Read more here: Get Started with SwiftUI for iOS

Apart from HTML and CSS, JavaScript is your language of choice if you’re a front-end web developer5. Chances are that if you build back-ends as well, you’re working with JavaScript there too, which makes you a “full stack” developer.

Until recently, “full stack” didn’t exist when it came to native iOS development. When Swift went open source, a few back-end Swift platforms were created, most notably Perfect, Vapor and Kitura. Unlike JavaScript, that can run on anything that has a JS interpreter, Swift back-end programming is mostly bound to Linux-like webservers.

But… which is greater, JavaScript or Swift? It’s hard to say. Both languages are great for beginners, and both languages have smart syntaxes, and they’re widely used.

The biggest differences are the languages themselves. Swift is strong-typed and static, whereas JavaScript is untyped and dynamic. JavaScript runs on an interpreter, whereas Swift code is always compiled before running.

JavaScript’s versions are… confusing. There’s a JavaScript 2015 version that’s also called ECMAScript 6 (ES6), and JavaScript 2016 === ES7. We’re currently at ES2019, the 10th edition of JavaScript. All browsers have their own implementations of the language, based on their JavaScript engines. The best supported version is ES5, with ES6/ES76 second best supported in browsers. Frankly, I’m lost here with ES versions – that’s why we have caniuse.com.

Swift 5 is currently the most recent version of the Swift language. It was initially developed by Chris Lattner at Apple, who is best known as the main author of LLVM. The development of Swift is now in the hands of the open-source community.

The switch from Swift 2 to Swift 3 was a challenge for many iOS developers, because the language upgrade introduced many breaking changes in existing code. The Swift language has seen a surge in adoption rate since 2015, resulting in a lot of new questions on sites like StackOverflow, which resulted in wrong or out-of-date StackOverflow questions and answers. The change to Swift 4, and Swift 5, proved to be less of a hassle.

You could conclude that:

5 Unless you go for something like Dart, CoffeeScript, TypeScript or… heaven forbid: ActionScript 3!
6 See: https://kangax.github.io/compat-table/

If there’s one thing that native iOS developers and web developers have in common, then it’s an unwavering religious belief in some tool, some language, and some framework. I haven’t ever met a developer, from both camps, that wasn’t ecstatic about some new tool.

All religion come with beliefs, and for web and native developers that’s no different. Many of them even share a belief: that there’s one platform, one language to rule them all.

As a web developer, you have intricate knowledge about making a web app or website work in all browsers. As a native app developer, you always try to make your apps work on both iOS and Android.

We all believe in that holy grail: the cross-platform tool. It doesn’t matter how hard Apple, Google, Microsoft, Facebook and Amazon try to keep their cashflows separate – we’ll keep marching onwards to that one tool that will run on all platforms.

Don’t get me wrong – I’m skeptical of all cross-platform tools. If you go all the way back to when I started coding apps, you’ll come across jQuery Mobile, Cordova, PhoneGap, Xamarin, Sencha Touch, Famo.us, Ionic… These platforms provide a native-like experience, but some have drawbacks, mainly because they’re based on HTML 5. In some cases you have to write platform-specific code, which defeats the purpose of a truly cross-platform tool.

Since then, these tools have grown up, but I haven’t seen an exodus yet from native platforms to one cross-platform tool. If anything, the cross-platform app landscape has become more fragmented, much like the web itself.

But… is it really cross-platform? I’ve asked around and two common opinions arose:

Working with any cross-platform tools, React Native included, has some cons and risks:

So.. what do you do? When in doubt, ask yourself: “Which tool is best for the job at hand?” Never choose a platform because everyone uses it7, or because you believe that cross-platform is by definition better than native. There’s nothing worse than choosing a platform simply because you think it’s the best, regardless of use case and implementation.

The new new contestant appears to be Flutter, which is yet another take on cross-platform development. And there’s always still WebAssembly. The closer cross-platfrom gets to the metal, the more native it gets…

Still interested in switching from web development to native iOS development? Here’s what you need to know:

Key take-aways of this article: