Map, Reduce and Filter in Swift

Written by LearnAppMaking on July 9 2020 in App Development, Swift 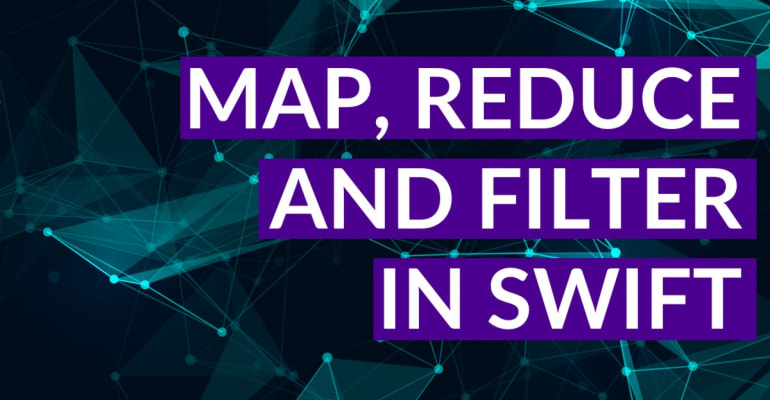 In Swift you use map(), reduce() and filter() to loop over collections like arrays and dictionaries, without using a for-loop.

The map, reduce and filter functions come from the realm of functional programming (FP). They’re called higher-order functions, because they take functions as input. You’re applying a function to an array, for example, to transform its data.

Swift’s Map, Reduce and Filter functions can challenging to wrap your head around. Especially if you’ve always coded for in loops to solve iteration problems. In this guide you’ll learn how to use the map(_:), reduce(_:_:) and filter(_:) functions in Swift.

Introduction to Map, Reduce and Filter

When you’re building iOS apps, you typically use procedural or Object-Oriented programming. Functional programming is different: it only deals with functions. No variables, no state, no for-loops — just functions.

Here’s how they work:

In case you’re thinking: “Look, I don’t need functional programming or data processing, because my apps don’t do that!” then don’t stop here. In recent app projects I’ve used Map, Reduce and Filter on multiple occasions:

You could have solved all these problems with a for-loop, but you’ll see that using map(), reduce() and filter() results in more concise, readable and performant code.

We’ll focus on map(), reduce() and filter() in this tutorial. Before we move on, here’s a quick overview of the most common higher-order functions in Swift:

You can use these functions on arrays, dictionaries, sets, ranges, sequences, and any other Swift type you can iterate over. If you want to learn more about compactMap(_:) and flatMap(_:), then check out this tutorial.

Several types in Swift, such as Array and Dictionary, have functions that accept closures as input. A quick pick:

You’ve seen the “map” and “reduce” functions in Swift written as map(_:) and reduce(_:_:) throughout this tutorial. The underscores and colons in those functions are part of the function’s signature, which is a special format to indicate function parameters. For example, the map(_:) function has one unnamed parameter, whereas the reduce(_:_:) function has two. You can learn more about that in this tutorial: Functions in Swift Explained.

The map(_:) function loops over every item in a collection, and applies an operation to each element in the collection. It returns a collection of resulting items, to which the operation was applied.

Let’s look at an example. We’ve got an array of temperatures in Celsius that you want transformed to Fahrenheit.

The code works fine, but it’s too verbose. You need a mutable “helper” variable fahrenheit to store the calculated conversions as you work through them, and you need 3 lines of code for the conversion itself.

Here’s how we can do the same with the map(_:) function:

You could even do all that on one line:

The map(_:) function transforms one array into another, by applying a function to every item in the array. The closure $0 * (9/5) + 32 takes the input value in Celsius, and returns a value in Fahrenheit. The resulting array of map(_:) is built up out of those converted values.

Let’s take a closer look at the closure. If you’ve worked with closures before, you’ll recognize the short-hand closure syntax. It’s a shorter way to code a closure, by leaving out much of its syntax.

The actual map(_:) function call, and its closure, is this:

What’s going on there? The map(_:) function is called on the array celsius. It takes one argument: a closure of type (Double) -> Double.

If you compare the short-hand closure syntax to the expanded code above, you’ll see that:

Even though the above code sample use Double types, you’re not limited to these types. The resulting type of a map() function can have a different type than what you put into it, and you can use map() on a Dictionary as well.

The reduce(_:_:) function loops over every item in a collection, and reduces them to one value. Think of it as combining multiple values into one.

The reduce function is perhaps the hardest of map, reduce, filter to comprehend. How can you go from a collection of values, to one value?

In data processing, you can imagine plenty scenarios when simple operations like these come in handy. Like before, you can solve any of these problems with a for-loop, but reduce(_:_:) is simply shorter and faster.

The function reduce(_:_:) takes two arguments, an initial value and a closure. In the above code we’re providing the + operator, that’s also a function with two parameters.

You can also provide your own closure, of course:

In the example above, you’re calculating the average of three numbers. The types of the values in the code are all Double. We’re first adding up all the numbers, and then divide it by the amount of numbers.

The reduce(_:_:) function is different in two ways:

In the above example, you can clearly see $0 and $1, the 2 parameters of the closures. When you run the code, this is the output you get:

See how we’re starting with 0, then adding 7? In the next step, we’re taking 7 – the current reduction value – and add 3, the “next” value in the reduction.

Here’s another way of looking at it:

This also makes it clear why you need an initial value for reduce(_:_:), because that’s the first first parameter of the closure.

Reduction can be tricky to grasp. It’s important to understand that you’re iteratively applying an operation, like +, to a set of values until you’re left with only one value. You literally reduce the amount of values.

The filter function loops over every item in a collection, and returns a collection containing only items that satisfy an include condition.

It’s like applying an if-statement to a collection, and only keeping the values that pass the condition.

In the above example, you’re filtering numbers from values that are even. The isMultiple(of:) function returns true when $0 can be divided by 2, and false otherwise.

Here’s a slightly clearer example, with the closure expanded:

In the example, the closure returns a boolean value, indicated with -> Bool. It’s provided one parameter, the item in the collection, and returns the result of isMultiple(of:). Neat!

Can you combine the map(), reduce() and filter() functions? Sure you can!

Let’s say we have a class of students. You know the year each student was born. You want to calculate the combined age of all students born in or after 2000.

Here’s how you do that:

The code itself is simple:

Let’s take a more interesting example. Check out the following code, taken from the tutorial about FizzBuzz:

See what’s going on? We’re transforming an array with numbers from 2 to 100 into either “Fizz”, “Buzz” or “FizzBuzz” with map(_:), based on the game’s rules. Finally, we’re reducing that array of strings into one big string with reduce(_:_:), combining every value. Neat!

What if you had to code all this with for in loops? You’d use a lot more code. And that’s map-reduce-filter’s power: it’s more concise, often easier to read, and — admit it — pretty damn cool!