Home » App Development » For Loops in Swift (How To)

Written by LearnAppMaking on July 7 2020 in App Development, Swift 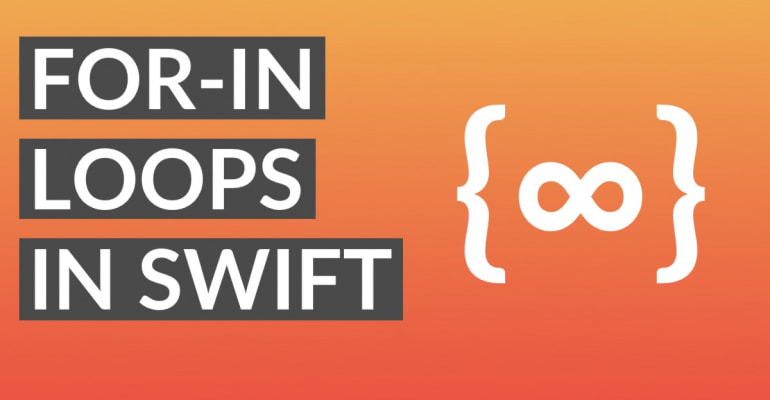 A for loop is a fundamental concept of programming. You can repeat code with a for loop, and make your code more expressive and elegant. You use for-in, while and repeat-while to loop in Swift.

In this tutorial you’ll learn how to use the for-in loop, with collections and ranges, and how to use other approaches like while and repeat-while.

The for loop in Swift is a super useful tool in any developer’s toolkit, so it’s a must to master as a practical iOS developer.

Iterating with The For Loop in Swift

The syntax for loops in Swift is surprisingly simple. Here’s an example:

A for loop in Swift always has the for and in keywords. The for loop then takes a sequence, items in the example above, and loops over the sequence one-by-one. With the syntax above, every item is available as the constant item within the loop. The code that’s repeated is within the squiggly brackets { }.

You can read the above example code as:

For every “item” in “items”, execute this code.

In many programming languages, the for in loop is called for-each. Typical for loop syntax in other languages uses this format: for(i = 0; i < n; i++) { ... }. Swift is different, because its for-in syntax can be used to loop over ranges, sequences, iterators, collections and even strings. All with the same syntax!

In Swift, object types like arrays, dictionaries and sets are known as collections. Any collection can be iterated with a for-in loop.

OK, let’s look at another example:

The example above uses the closed range operator ... to create a range that goes from 1 to 5, including 5. Like this, you can repeat a particular instruction, like print(), a limited number of times.

In the next sections you’ll look at some practical uses of the for loop.

It’s easy to accidentally create a loop that repeats one too few or too many times. This is called an off by one error.

Loop over Collections with For-In

Let’s not stick to theory here! What are good scenarios for using for loops to iterate over collections?

As you know, arrays and dictionaries are collections. In Swift, you can also define your own collections, like the Results collection from the Realm database framework.

The above example will print out all the strings in the array, one by one. The variable names has no explicit type, but it’s inferred to be an array of strings: [String]. Therefore, the variable type of name must be String.

What if you want to create a function that returns the sum of any array of integer numbers? You’d code it like this, with a for loop:

What’s interesting is that you also can use a collection’s index to reference a particular item. Instead of for item in items, you do this:

See how that’s different? You’re creating a range of integer values from 0 to numbers.count, not inclusive.

For an array of 6 items, we’re iterating from index 0 to index 5; from the beginning to the end of the array. Inside the for loop, we’re using subscript syntax to get the right integer from the numbers array, with numbers[i].

How can you iterate over a dictionary? Here’s how:

In the above code, we’ve defined a scores dictionary with names and scores. The type of scores is [String: Int], so the dictionary has String keys and Int values.

What if you’ve got an array, and you still want to access the index for each item in the array? You can’t use the for name in names syntax we’ve used before! Fortunately, arrays have a helpful enumerated() function. Here’s how you use it:

In the above code, we’ve defined an array of integers called primes. In the for loop, we’re deconstructing the index and the value of the array item into the tuple (n, prime). We’re using the enumerated() function on primes to do that. This function will return an array with tuples, consisting of indices and values. That’s exactly what we need!

Grabbing the index of an array value like this is exceptionally helpful if you want to know “where” in the array you are. You can use the index to refer back to the same array item, later on.

In practical app development, for loops and collections are useful in the following scenarios.

When you want to apply the same style to several UI elements of the same type, like buttons. You simply put the buttons in the array, iterate the collection with a for loop, and set the styles to each individual button in the for loop.

When you want to loop over a data set, for instance to plot a set of numbers on a line graph. You’d draw the line graph by iterating every data point on it, with a for loop.

When you want to send a notification to every one of a user’s followers, for instance in a social media app, you’d use the for loop like this:

You can loop over any collection that conforms to the Sequence or IteratorProtocol protocols.

Loop over Ranges with For-In

You’ve already looked at ranges for a bit, but let’s dive deeper. It’s easy to imagine using the for loop to iterate collections, but iterating over ranges is just as interesting.

Here’s that code example with the closed range operator again:

The closed range operator ... creates a struct of type ClosedRange. As you’ve seen in the previous example, the closed range takes two parameters: the lower bound (first) and the upper bound (last). It then produces a range between those numbers, including the last one.

Interestingly, you can also create ranges with text characters! Like this:

The ClosedRange struct has a cousin called Range, with the half-open range operator ..<. It produces a range between the upper and lower bound, but then without including the upper bound itself.

You’ll discover that the half-open range operator comes in handy in programming, because you’re often dealing with ranges that run from 0 to, for instance, the end of an array.

The index of the last item of an array is always equal to the size of the array minus one. If you want a range that runs from 0 to the end of the array, you logically get this:

That’s exactly the same as the code below — but only one of them is easier to read, and more concise.

Loop with While and Repeat-While

Iterating over a set of data or instructions is a crucial concept in programming for two reasons:

The for-in loop isn’t the only kind of loop syntax that Swift has. There’s a couple more:

The for-in, while and repeat-while statements are the most basic approaches to repeat code. In Swift, and in the iOS SDK, you’ll find more concepts of iteration. It’s always good to consider these other options, otherwise you might find yourself writing inefficient and overly extensive code.

And that’s all there is to it!

So, now you know how to write for-in loops in Swift, and what they’re best used for. You know what they say – a lazy programmer is a good programmer! Never code things twice if you can use a loop instead…