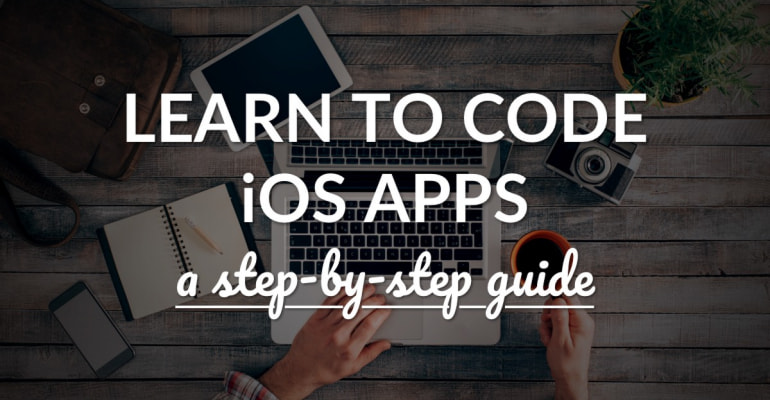 In this tutorial, we’ll discuss how you can best learn iOS app development. We’re going to look at how you can learn to code iOS apps, instead of focusing on how to build an app.

Just as with learning anything new, learning iOS development is challenging. It’s also fun, exciting and rewarding! Can you take an approach that takes the frustration out of learning how to build iOS apps, while getting you faster to the finish line? Yes!

When you’ve finished reading this tutorial, you will have a step-by-step plan for learning how to code. You know exactly what to do, what steps to take, and how to take them. Oh, and you don’t need any coding experience to get started.

Getting Started With iOS Development

Let’s first talk about what skills you need to build your own apps.

Can anyone learn how to code? Absolutely! You only need some time, and a little bit of perseverance to get started. It helps to pick an iOS app project you want to build, because that’ll motivate you to learn more.

Xcode, the Mac app you use to create iOS apps, only runs on macOS. And to use macOS, you need a Mac computer. Xcode doesn’t run on iPad, unfortunately. If you want to learn iOS development, you will need a Mac! There are other options too, as I’ve explained in this tutorial.

Practice One Hour Per Day

One hour a day…

This is my no. 1 rule for learning anything. If you can set aside one hour a day to focus exclusively on learning iOS app development, you’re guaranteed to make progress. It’s that simple.

Research shows that our brains learn new information when we repeatedly expose ourselves to the learning material, in different ways. You could say that practice makes permanent, so by consistently spending time to learn iOS development you will master it.

In the years that I’ve run LearnAppMaking.com, I’ve seen many people learn to code iOS apps. A pattern that stood out among successful learners is that they learned habitually, and kept their momentum between learning sessions. So, when you learn consistently, and get back to it regularly, you’ll learn app development more successfully.

Learning is of course a complex topic. If you’re interested to learn more about how we learn, I recommend you check out Barbara Oakley’s excellent Coursera course, Learning How To Learn.

Do excuses bog you down, when you want to learn iOS development? Commit to 1 hour of learning a day. Keep a run streak count on your calendar to keep yourself accountable. Mark every day you learned for 1 hour with a big red X, and don’t break your day-to-day streak. No zero days!

Let’s take a look at the topics you’ll need to learn to master iOS app development. And get my open source Swift cheatsheet while you’re at it!

Begin with these Swift topics:

Then move on to topics about the iOS SDK:

Looking for a great app project to build? Try these:

Then learn about app architecture:

And focus on some intermediate topics:

Finally, get some diversity into your learning with:

Looking for comprehensive, in-depth iOS app development training? Check out my flagship iOS development course, here at LearnAppMaking. The above topics, and many more, are introduced gradually as you build 6 different iOS apps in the course. And you get 1-on-1 help in our developer community! » Learn more

Get Through “The Dip”

I’ve learned plenty of new things in my life. Every time I learned a new skill, I would encounter something known as “the dip”. The concept of this “dip” was originally introduced to me by Seth Godin.

You want to get through the dip as soon as possible, because everything gets easier after the dip. The idea of the dip is quitting before you start something, and powering through the dip no matter what, if you decided to pursue your goal.

Here’s how you recognize the dip when learning iOS development:

When you feel a certain fluency when you’re coding apps, you know you’re through the dip. It’s a great feeling of ease, clarity and comfort. And it’s awesome!

When you set your expectations of learning iOS app development too high, you’re likely to give up when the going gets tough. You get frustrated, lose motivation and give up. If you reflect on this before starting, you might be compelled to give it a try and decide that it’s not for you.

When there’s too much time between learning sessions, you don’t build up momentum. Your brain doesn’t get enough exposure to the materials you’re trying to learn. So, you forget what you learn and you won’t get over the hump.

It’s surprisingly simple to overcome these mistakes. Here’s how:

If you give up before you start, you will never have to get through the dip. It sounds defeatist, and that’s the point: quitting before you start is exceptionally effective! You can try lots of things, decide that it’s not for you, and move on. You increase your chances of succeeding at a greater number of goals, having tried many of them. And think about the time you’ve saved!

If you commit to learning app development, then follow through. Don’t give up! Commit yourself, build momentum, and keep the pressure on. Power through the dip, and everything gets easier after.

The essence of the dip is your ability to assess future failures, and choosing what to commit to. You save time, money and energy because you didn’t waste it on something you were going to give up anyway. Instead, you spend these resources on something you’re 100% committed to. And that’s what you’ll succeed at.

This is an excellent video that explains how The Dip works, in more detail.

How To Start Your Own App Project

The best way to learn iOS app development is to start your own app project. You can try out newly learned things in your own app, and gradually build towards a complete app.

The single biggest struggle for beginner app developers is transitioning from doing tutorials to coding your own iOS apps from scratch. Everything makes sense when you’re following a tutorial, but you’re stumped when starting a project from scratch.

When you start your own project as early as possible in the learning process, you get used to coding from scratch. And that’s exactly what you want to practice. Don’t stay stuck with iOS tutorials!

Here’s the approach I recommend:

Divide your time equally between the three phases. You can move between the phases however you see fit, but you’ll see that it’s easiest to go from Learning to Practice to Experience.

The last step is called the Experience Phase because real-world experience is important. If you stay in the learning and practicing phases, you never incorporate what you learn in real-world projects.

It’s exactly this real-world experience that matters to employers, freelance clients, indie apps and startups. Building iOS apps is different in the real world, compared to the classroom. You might learn “fake” swimming on land first, but you don’t want to stay there forever. Jump in!

The Practice Phase is crucial, too. I see iOS developers learn something new and then immediately apply it in a real-world project. This leads to errors and frustrations, because your new skill hasn’t developed enough to be ready for an actual project. Practice it from different perspectives first and avoid copying-and-pasting code.

How do you start your app project?

I’ve written extensively about creating your app project from start to finish, so here are a few quick tips:

Building your own app project is incredibly fun and rewarding. It’s not just the end result that counts – the gradual progress of improving, learning and refining is what makes it worth it. And you’ll cultivate a valuable, employable skill in the process: iOS development!

Are you ready to take on your app project, and learn iOS app development? So far, we’ve looked at: