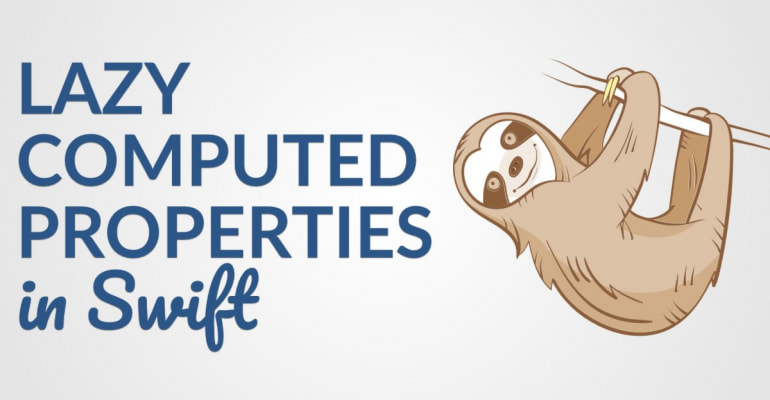 We all know lazy programmers are the best programmers, so you’ll want to pay close attention in this blog post. What’s that Bill Gates quote again?

Ain’t that the truth! Let’s get to it…

What Are Computed Properties?

You know what a stored property is, right? It’s a variable that’s part of a class object. You use it to store stuff. You also use properties to structure your code better.

Here’s a class that defines 3 properties:

Here’s how you use it:

See how we changed the property legs to 3?

Instead of storing a value it returns a value by executing a bit of code. In the example above, the circle circumference is calculated as C = 2 π r.

You can now use the above Circle class like this:

See how you can just type cookie.circumference and get the calculated result of the property?

Computed properties have one downside: every time you access them, they’re re-calculated. This can be a disadvantage if the value of the property doesn’t change or its calculation is resource intensive. You’d recalculate the value when you don’t have to! That’s a waste of computer resources.

Is there a way to solve that?

OK, let’s talk about initialization for a bit. Every time you create an object in Swift, it’s initialized.

You can describe “initialization” as setting a variable to an initial value. An object can have properties, so when you initialize an object, its properties are initialized too.

Let’s say I have a car with an advanced GPS navigation system. When I’m taking the car some place I know well, I don’t need navigation – I can just drive there. However, if I’d just initialize the car, the navigation system would be initialized as well – even if I don’t use it. That’s a waste of resources!

How can I use my car’s resources more sensibly? With lazy loading!

With lazy loading, the initial value of a property is only calculated when it’s first used. If it’s not used, it’s not calculated.

In both scenarios it doesn’t make sense to initialize the property when the object is initialized, so that’s when you use lazy loading.

Using lazy loading is easy: simply prepend the property with the lazy keyword. You can only use lazy with var and not with let.

Why don’t you try it out for yourself? Execute the code below in the Swift Sandbox. First, run the code with lazy. Then, remove the lazy and see the change in the code’s output.

See how we made circumference lazy? That won’t work…

There’s a trick, however, to make lazy computed properties. Here, check this out:

A few things have changed:

The trick is combining a closure and lazily invoking it. When you access the circumference property you implicitly call the closure, and get its result.

Quick Tip: Lazy computed properties are only calculated once: when they’re first accessed. Depending on your code, and code you work with, this is a Good Thing or a cause of weird bugs!

Lazy computed properties come in handy in a few scenarios:

Sometimes it’s just nicer and more elegant to define a property as a lazy computed property, instead of writing it as a function. After all, you can code a function in such a way that it’ll only recalculate a returned value if it hadn’t done so before – right?

Keywords like lazy, and closures, can add to the readability and maintainability of your code. With lazy computed properties you can keep your code closer together, adding a property’s logic near the property declaration itself. Neat!

Lazy loading postpones initializing a property until it’s first accessed. Using the lazy keyword isn’t allowed for computed properties, so you use an implicitly invoked closure to get the same effect.