Which MacBook is Good Enough for iOS Development? 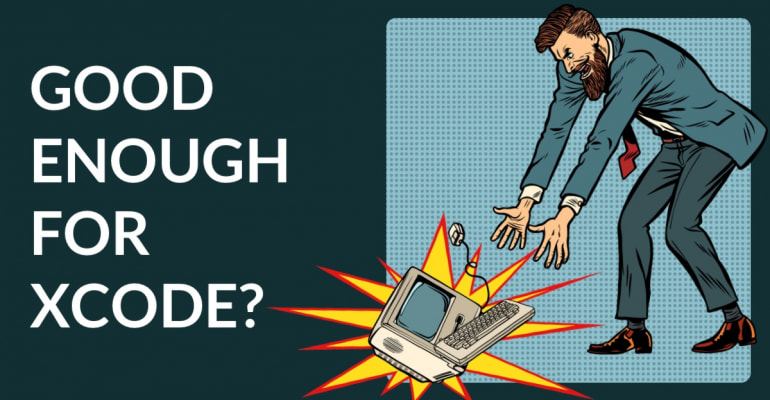 How fast does your MacBook need to be to comfortably code iOS apps with Xcode? Is a MacBook Pro from 2-3 years ago good enough to learn Swift programming? Let’s find out!

I’ve answered a lot of “Is my MacBook good enough for iOS development and/or Xcode?”-type questions on Quora. A few of the most popular models include:

These models aren’t the latest, that’s for sure. Are they good enough to code iOS apps? And what about learning how to code? We’ll find out in this article.

Frankly, that MacBook Air from 2013 felt more sturdy and capable than my current MacBook Pro. After 5 years of daily intenstive use, the MacBook Air’s battery is only through 50% of its max. cycle count. It’s still going strong after 7 hours on battery power.

In 2014, my trusty MacBook Air broke down on a beach in Thailand, 3 hours before a client deadline, with the next Apple Store 500 kilometer away. It turned out OK, of course. Guess what? My current MacBook Pro from 2018, its keyboard doesn’t even work OK, I’ve had sound recording glitches, and occasionally the T2 causes a kernel panic. Like many of us, I wish we had 2013-2015 MacBook Air’s and Pro’s with today’s specs. Oh, well…

A next upgrade came as a 400 Mhz AMD desktop, given again by friends, on which I ran a local EasyPHP webserver that I used to learn web development with PHP, MySQL and HTML/CSS. I coded a mod for Wolfenstein 3D on that machine, too.

We had no broadband internet at home back then, so I would download and print out coding tutorials at school. At the one library computer that had internet access, and I completed the tutorials at home. The source codes of turn-based web games, JavaScript tidbits and HTML page snippets were carried around on a 3.5″ floppy disk.

Later, when I started coding professionally around age 17, I finally bought my first laptop. My own! I still remember how happy I was. I got my first gig as a freelance coder: creating a PHP script that would aggregate RSS feeds, for which I earned about a hundred bucks. Those were the days!

The world is different today. Xcode simply doesn’t run on an i486 PC, and you can’t save your app’s source code on a 1.44 MB floppy disk anymore. Your Mac probably doesn’t have a CD drive, and you store your Swift code in a cloud-based Git repository somewhere.

Make no mistake: owning a MacBook is a luxury. Not because learning to code was harder 15 years ago, and not because computers were slower back then. It’s because kids these days learn Python programming on a $25 Raspberry Pi.

I recently had a conversation with a young aspiring coder, who complained he had no access to “decent” coding tutorials and mentoring, despite owning a MacBook Pro and having access to the internet. Among other things, I wrote the following:

You’re competing with a world of people that are smarter than you, and have better resources. You’re also competing against coders that have had it worse than you. They didn’t win despite adversity, but because of it. Do you give up? NO! You work harder. It’s the only thing you can do: work harder than the next person. When their conviction is wavering, you dig in your heels, you keep going, you persevere, and you’ll win.

Winning in this sense isn’t like winning a race, of course. You’re not competing with anyone else; you’re only really up against yourself. If you want to learn how to code, don’t dawdle over choosing a $3.000 or a $2.900 laptop. If anything, it’ll keep you from developing the grit you need to learn coding.

Great ideas can change the world, but only if they’re accompanied by deliberate action. Likewise, simply complaining about adversity isn’t going to create opportunities for growth – unless you take action. I leapfrogged my way from one hand-me-down computer to the next. I’m not saying you should too, but I do want to underscore how it helped me develop character.

If you want to learn how to code, welcome adversity. Be excellent because of it, or despite it, and never give up. Start coding today! Don’t wait until you’ve got all your ducks in a row.

Which MacBook is Fast Enough for Xcode 11?

The recommended system specs to run Xcode 11 are:

Looking for a second-hand Mac? The following models should be fast enough for Xcode, but YMMV!

Pro tip: You can often find the latest macOS version a device model supports on their Wikipedia page (see above links, scroll down to Supported macOS releases). You can then cross-reference that with Xcode’s minimum OS requirements (see here, scroll to min macOS to run), and see which iOS versions you’ll be able to run.

Awesome! We’ve discussed what you need to run Xcode on your Mac. You might not need as much as you think you do. Likewise, it’s smart to invest in a future-proof development machine.

Whatever you do, don’t ever think you need an expensive computer to learn how to code. Maybe the one thing you really want to invest in is frustration tolerance. You can make do, without the luxury of a MacBook Pro. A hand-me-down i486 is enough. Or… is it?