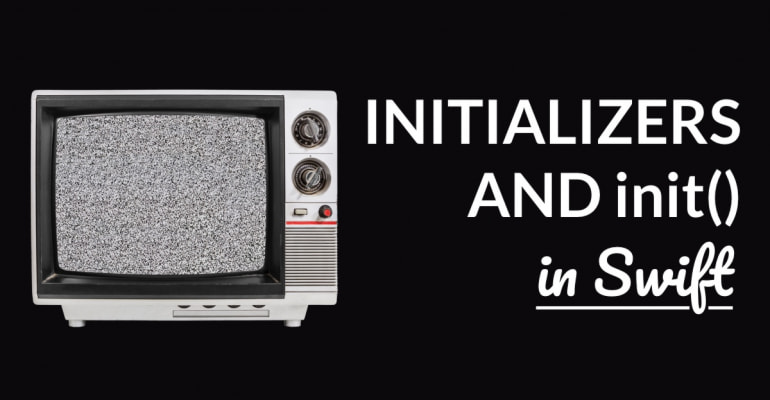 In Swift, an initializer is a special init() function that we use to create objects of a particular class, struct or type. They’re used to “construct” an instance of the given type.

In this article, we’re going to discuss how initializers work, why they’re needed, and how you can write your own. We’ll focus on the different kinds of initializers, such as convenience initializers, what the consequences are of subclassing, errors you may face in day-to-day iOS development, and much more.

What’s an Initializer In Swift?

First things first. What’s an initializer and why do we need ’em?

In Swift, an initializer is a special function that we use to create objects of a particular class, struct, or other type. Initializers are sometimes called constructors, because they “construct” objects.

Let’s take a look at an example. First, we’re creating a struct named Book. It has 3 properties: title, author and pages.

Next, we’re going to create an instance of the Book struct. Like this:

In the above code, the first line uses the initializer function Book() to construct an object of type Book. We could say that we’ve “initialized” an object Book, and assigned it to the variable lotr.

An initializer consists of the name of the type (i.e., class, struct, etc.) followed by function parameters, wrapped in parentheses.

It’s easiest to remember that an initializer is like any other function, except that the function name is the same as the name of the type.

You use an initializer to construct an object of a particular type, like Book. But what does that look like internally, inside the class or struct? And can we customize the way the initializer works? Yes!

Here’s an example of an initializer:

The initializer function init() is a function like any other Swift function, so it can have parameters, has a code body, etcetera. The init() function implicitly-ish returns an object (see failable initializers, below).

How do you keep that Book() and init() apart? Here’s how:

Why don’t you play around with the code from this section, in the Swift sandbox below?

In the next few sections, we’ll discuss many more customizations and attributes you can add to initializer functions, such as the memberwise initializer, and designated initializers.

Note: We have to adhere to a few rules when working with initializers, but the most important one is that every stored property of a class or struct must have a value (or be nil) at the end of the init() function.

Let’s take a look at a few types of initializers that are useful in day-to-day Swift programming. They are:

First, the default initializer. We’ve actually already used it in the previous section. Here, check this out:

In the above code, we’ve created a class Car with a property name of type String. On the last 2 lines, we’re initializing an instance of Car with the Car() initializer and assign the object to the lambo variable. We’re also setting its name property.

In the example, the default initializer is automatically synthesized (“generated”) based on the default property value of the Car class. Differently said, when we initialize with Car(), the name parameter is set to an empty string, which is the property’s default value.

The above class definition is exactly the same as this:

Why use default values for properties, and the default initializer? Firstly, it’s more convenient. If you’re going to provide a default value, you might as well keep your code more concise. Moreover, you can use type inference, and keeping the property declaration and its default value together makes your code easier to read.

The memberwise initializer is a neat trick that’s only available for structs. In short, Swift will synthesize an initializer for structs based on the properties of that struct, if you don’t provide any init() functions of your own.

It’s a struct called Rectangle with 2 properties width and height of type Int. Both have a default value of 0.

We can now initialize an instance of Rectangle like this:

The implementation of the above init(···) function is fairly trivial, so that’s why Swift generates it for us. You’ll need to take a few caveats into account, though:

You can declare your own failable initializer with init?(), like this:

In the above code, we’re returning nil if the guarded condition is false. This will cause the initializer to fail and return nil.

Swift has a great number of failable initializers, such as the Int(···) conversion from string to integer. Another good example are enumerations and their raw values, which may not be represented by an actual enum value.

So, if we’re to make a class Car that subclasses, we’ll need to implement the above init() function too. Like this:

Interestingly, the required keyword implies that the subclass implementation of the initializer is actually overridden. An explicit override modifier for the init() function is not necessary.

How do you solve that? Just define the required initializer, and call the super.init(···) in the initializer’s body. Like this:

Be mindful of properties you’ll still need to initialize in the above init?(coder:) function. You’ll need to do so prior to calling super.init(···) (see more, below).

Technically, an initializer doesn’t return a value – it merely makes sure that self is fully initialized. Similarly, nil may seem like it’s not “a value”, but actually nil just means Optional.none. Failable initializers may seem paradoxical, if you consider they don’t construct the requested object, until you add optionals and Optional.none into the equation. When an initializer fails, you just don’t get the object you asked for…

So far so good, right? Initializers are the functions that make sure that an object is fully initialized. We’ve got that init(), and then for a Book struct we’d do Book(title: ···), and so on.

Initializing gets more complex when subclassing and inheritance come into play. In the next few sections, we’ll discuss what happens with initializers when you start subclassing.

First, let’s discuss the role of designated and convenience initializers. We’re going to start out with some code for a Circle, like this:

In the above code we’ve defined a class called Circle. It has one stored property radius of type Double, and one computed property circumference of type Double. The class also has one initializer, the designated initializer, declared as init(radius:), which will assign the provided radius parameter to the property of the same name.

Differently said, we can create a circle, provide its radius, and get the circumference of the circle (2πr). Like this:

So far so good! Next up, we’re going to declare a second initializer. Like this:

Differently said, we’re creating an initializer that’s convenient to use. Some developers may want to create a circle by its radius, and others by the circle’s circumference. That’s convenient!

Why didn’t we just create another init() function? Like this:

It’s as if the convenience initializer says to the designated initializer: “Look, you do the heavy lifting, I’m just here for convenience!” The benefits of initializer delegation becomes more clear when subclassing, too.

Before we continue, take note of a few “rules” for initializers:

Let’s see that 2nd rule in action, in the previous example. This code, right here:

For the sake of completeness, I’ve used the word “delegation” in this section. This is different from the delegation you know in iOS development, where one class hands-off functionality to another class. In this section, “delegation” actually means to literally delegate, i.e. to tell another initializer to handle the rest of the initialization. Much like how you delegate the ordering of pizza to a friend (unless they order pineapple).

Next up, we’re going to subclass the Circle class from the previous example. We’ll define a Cylinder, which is essentially a 3D circle with a height and volume.

You also see that the Cylinder class has a height property of type Double, and it defines a computed property that calculates the volume of the cylinder with πr<sup>2</sup>h.

Try for yourself with the Swift sandbox below! See if you can …

Why so much fuss over initializers? I mean, it was fun when we discussed that initializers were like functions, but did we have to dive into designated, convenience, chains and what not? Yes, we had to!

Rules mean – especially if you’re unaware – that you’ll bump into errors and bugs here and there. That’s why we’re going to discuss a few error messages you might come across in your day-to-day iOS development. We could not have done that had we not discussed how initializers work exactly.

Must Call a Designated Initializer of the Superclass

Remember the rules for initializers that we discussed? When subclassing, initializers must ultimately call a designated initializer of the superclass.

Double-check with yourself that init(radius:) is in fact the designated initializer of the Circle class, i.e. the superclass of the Cylinder class.

Class Has No Initializers

Alright, the meaning of this error is simple: a class you’re using does not have any initializers. This typically means 2 things:

You can also come across the Class has no initializers bug when the order of operations inside the init() function is wrong. This is especially apparent in subclassing UIViewController.

Consider that you’ve got a view controller with a text property that does not have a default value. Like this:

Then, make sure that the text property is initialized prior to calling super.init(···). Like this:

Property Not Initialized At super.init Call

The Property not initialized at super.init call is similar to the one above. One of the rules of working with initializers, is that a designated initializer must initialize any of its properties prior to calling super.init(···).

This is exactly what happened in the previous error. We had to initialize self.text before calling super.init(···).

You could run into issues with properties that are used at a later point, i.e. after initialization, and don’t have a sensible value prior. One option would be to make those properties optionals, or even implicitly unwrapped optionals.

Note: In older versions of Swift, this error, and the previous one, can prompt the following error message: Return from initializer without initializing all stored properties. The solution is the same: make sure properties are initialized before the end of init(), and before calling a superclass initializer.

Initializer Does Not Override a Designated Initializer From Its Superclass

Must Call a Designated Initializer of the Superclass ‘UIViewController’

This error message is similar to the ones we’ve already discussed. It pops up when attempting to subclass the UIViewController class (or similar subclasses, like UIView). You’ve chosen the wrong initializer to call. Make sure to call the designated initializer.

How do you find the designated initializer? Check the documentation for UIViewController, find its initializers, and find the initializer not marked with convenience.

Awesome! We’ve come a long way. We started out by just discussing what initializers are, what they’re for, and how you can write your own init() function. We focused on different types of initializers, and the relationship between designated and convenience initializers, and subclassing. Neat!