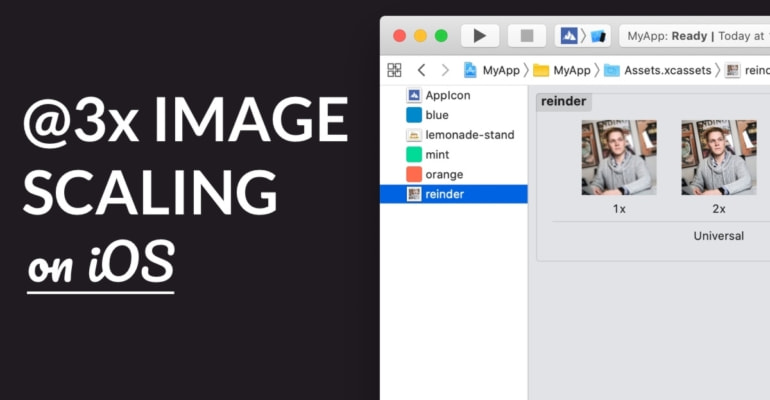 How does image scaling work on iOS, and what does @2x mean? Different iPhone and iPad models have different screen sizes and pixel densities (PPI). This affects the graphics assets, images and artwork you’re going to use in your iOS app.

In this tutorial, you’ll learn more about:

Different iPhone models have different screen sizes and pixel densities. For example, an iPhone 11 Pro Max’s screen measures 6.5″ across. You can fit 1242 × 2688 pixels on its screen.

Compare that to the iPhone 11, with 6.1″ and 828 × 1792 and you can deduce that the pixels-per-inch (PPI) of an iPhone Pro Max is greater. You can fit more pixels in the same space, which means that images on screen appear with more detail.

What does that mean for iOS development? As app developers and designers, we need to take into account different screen sizes and pixel densities. This is made easier thanks to 2 important concepts:

Your head spinning yet? Don’t worry! It boils down to a simple rule: More pixels in the same square inch means you need bigger images! We use density-independent points to not have to worry about pixels.

Let’s check out an example: 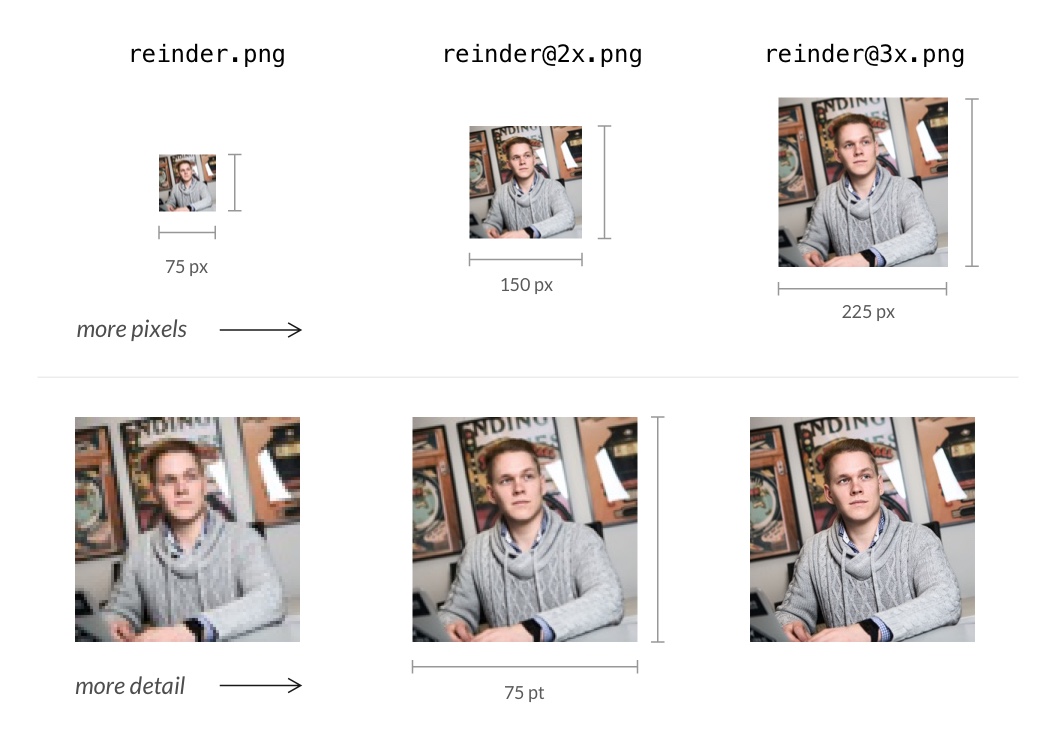 In the above image you can see an example (yours truly!) of the same image with different pixel densities, and how that affects the amount of detail in the photos.

How does this translate to iPhone screen sizes? Let’s say we show the above images on an old iPhone 3GS, an iPhone 8 and an iPhone X. Also imagine that each of those iPhone’s has the same absolute screen size, like 5.8 inch across.

If you were to design a User Interface that includes a user’s avatar photo, you’d simply set the UIImageView or Image view to dimensions of 75 by 75 points. The amount of pixels differs within that space, from 1x to 2x to 3x. More pixels in the same square inch means you need bigger images!

When you import images in an asset catalog in Xcode, it’s smart to drag-and-drop the 3 image sizes in one go. This will link them together, creating one image asset, with 3 size variations. Neat! 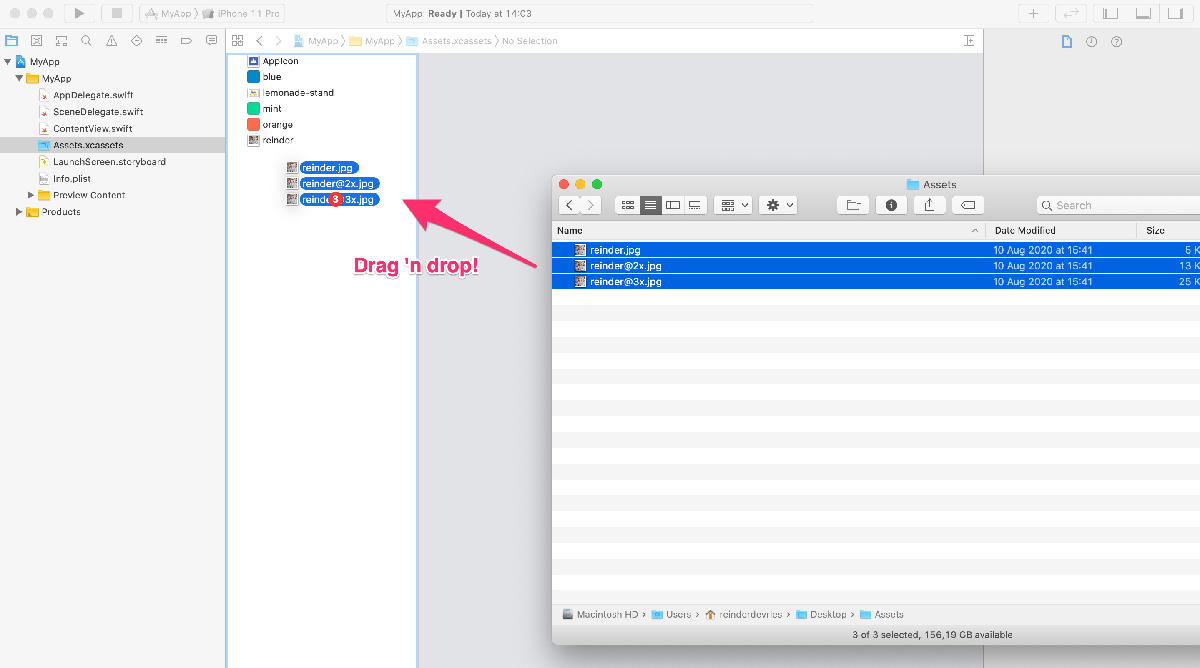 How does this affect practical, day-to-day iOS development? Let’s take a birds-eye view of screen sizes, image scaling, and 2x-3x.

As an iOS developer, it’s important to understand the concepts of scaling, screen resolution, pixels-per-inch, and the @2x and @3x file name conventions.

We’ve discussed how different iPhone models have a different absolute screen size and resolution, which results in a distinct pixels-per-inch (PPI) for that iPhone. When you can fit more pixels in the same “physical” space, you need bigger images. You provide those images in your iOS app through Xcode, and the filename@2x.png and filename@3x.png.

As you build your app, its graphics, icons, images and UI are usually provided as scale-independent vector graphics. This means you can export those graphics in pretty much any resolution you want. Tools like Sketch allow you to exports graphics files with the right settings automatically. 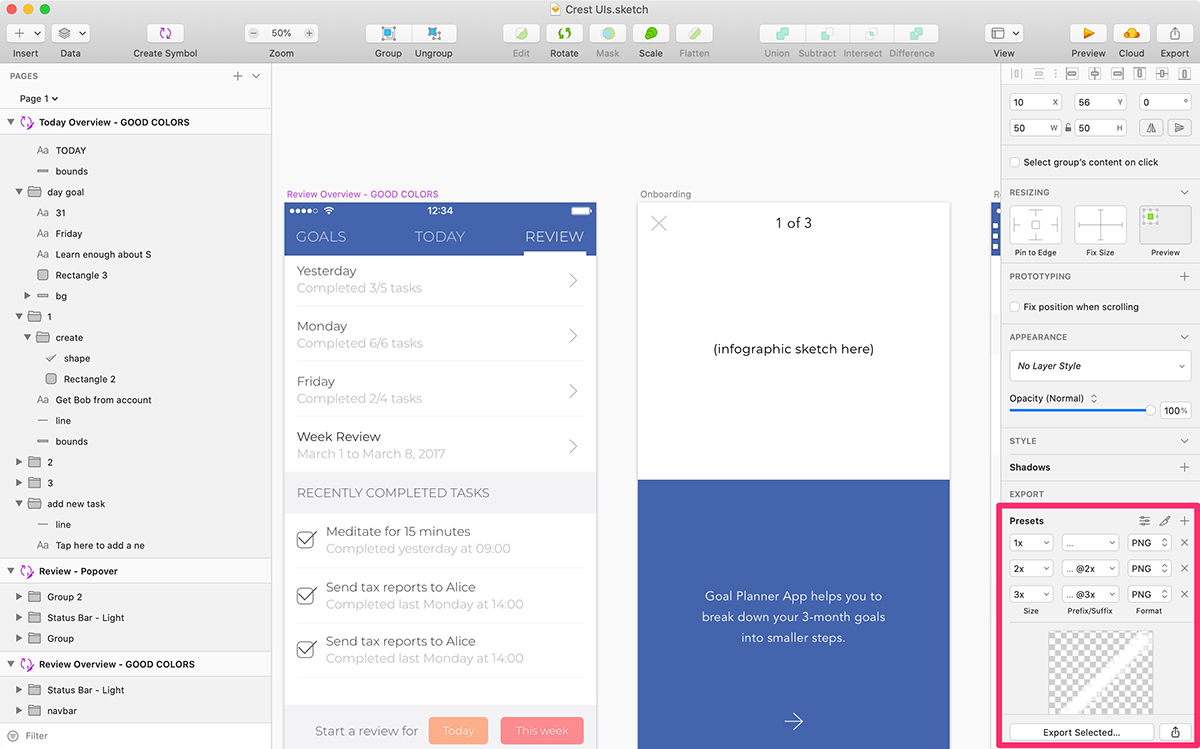 When your workflow permits it, you can of course also export graphics directly in a vector format. Xcode 12 and onwards supports SVG, which is a standardized format for vector graphics, such as icons, illustrations and graphs.

A common mistake in working with scaled images is mixing up the base image size. When you’ve got a 1x, 2x and 3x image, what’s the size of that image in points?

Another potential snafu to keep in mind is that your graphic designer’s MacBook also has gotten a higher resolution Retina screen. This means they sometimes design a User Interface already at 2x resolution, for example at 750 × 1334 pixels (iPhone 8). That’s a 2x screen resolution, so you need to divide asset sizes by 2 or multiply by 1.5x to get to @2x and @3x respectively.

The size of an image (or UI element) within the User Interfaces of your app is governed by Auto Layout (or SwiftUI). With Auto Layout, for example, you position an image relative to the screen’s edge. This is not affected by screen PPI, to the extent that Auto Layout’s points are scaled up or down too, of course.

Awesome! Image scaling and @2x are challenging to wrap your head around initially, but they’re essential to practical iOS development.