Written by LearnAppMaking on April 17 2020 in App Marketing 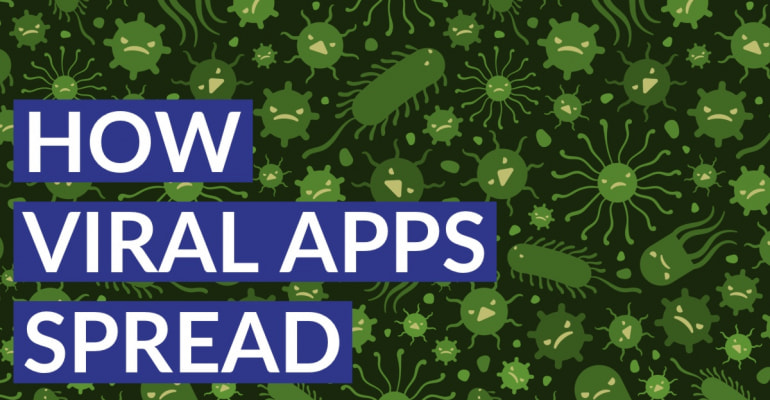 Hotmail is often seen as the first web app that went viral.

The web-based email provider launched in 1996 and was acquired by Microsoft 1.5 years later. By then, the service had amassed more than 8.5 million users. At that time around 70 million people used the internet. How did Hotmail spread among 12% of internet users in such a short time period?

An idea that spreads like a virus is important for creating a successful app. It taps into the network effect. Does your app get better when more people benefit? Some say viral marketing is crucial for growth: An app cannot succeed if it’s not viral.

How do you create a viral app? Let’s dive in.

Build Viral Marketing Into Your Apps

The best apps have virality built into them.

When you sent outbound email with Hotmail, the email client would include a single line at the bottom of the email: “Get your free email with Hotmail”. The word “Hotmail” linked to the app’s home page, which explained how it worked.

Imagine that you send emails to 10 of your friends. Thanks to that single line at the bottom of your email those 10 friends now have the opportunity to become Hotmail users. This is how viral ideas spread.

That’s not all… At the time, the concept of web-based email was very new. Everyone had one paid email address provided by their ISP. You could typically use those only from your home PC, with a desktop-based email client.

Hotmail was free, you could access it from anywhere in the world via the web app, and you could get an extra email address at no cost. Hotmail wasn’t just a viral app – it solved a problem people were having.

Hotmail gets better when your friends use it, because you can communicate more reliably with each other. It’s like a phone network: when more people get connected, we can all call and chat with more people. As a result, the value of the “network” increases (by N2, actually). This is called the network effect.

Viral apps are also a matter of status. When I recommend Hotmail to you, and you start to use it and like it, I grow in status. Friends recommend friends good stuff. The same happened with the launch of Gmail in 2004. You could only invite a few users (if you were lucky enough to be one). This scarcity, combined with the Gmail’s value – more storage space than Hotmail† – led to a surge in demand.

†: Remember deleting emails or SMS messages to increase storage space? The 2000’s sure do! One of Gmail’s selling points was infinite storage space, and more space as more users joined. This wasn’t only marketed as “more storage space”, but as “You never need to delete emails.” The same kind of benefit-oriented marketing message was used for the introduction of the iPod. Instead of “5GB of storage” space, they said: “1,000 songs in your pocket”. Feel the difference?

Viral: An App That’s Worth Spreading

In 1996 the internet counted only about 250.000 websites. Make that 1.1 million in 1997. These days, there are more than 4 million Android and iOS apps. Does that change how we think about virality?

The basic principle of viral marketing is still the same. What is it about your idea that makes people tell other people about it?

With 4+ million apps, the App Store is very crowded right now. It’s almost impossible to stand out naturally. You can’t just build an app, publish it, and get noticed by a lot of people.

Before you start thinking about viral marketing, you have to ask yourself:

There’s no point in creating yet another social media app in the hopes of it spreading virally. Unique ideas are equally bad too; who’s to say a unique idea hasn’t been tried before and failed?

You don’t want your viral marketing to be superficial either. Over 50 million people reportedly downloaded Flappy Bird. How many of them still play it – and spread the word – today?

Make a useful app first, and then see if you can nudge it go viral.

Let’s look at a current day example: Bear. It’s a note-taking app for Mac and iOS. You can use it to journal, collect notes, write prose and even for coding. The app is beautifully designed. Apple named it App of the Year 2016 and it got the 2017 Apple Design Award.

Bear is an app worth spreading. Here’s what they did different:

See how those things come together? You create an app worth spreading. You enroll people in the process and grow your fanbase. You create an environment in which we all benefit when we spread the word about your app. The app slowly goes viral, as more people talk about Bear and start using it. I haven’t recommended Bear to a lot of people, but the friends I told about Bear still use it!

It’s almost impossible to create a viral app intentionally. What you can do, is nudge your idea in the right direction.

What steps can you take today? A few suggestions: