How To Create a New Xcode App Project

Written by LearnAppMaking on November 19 2020 in App Development, iOS, SwiftUI 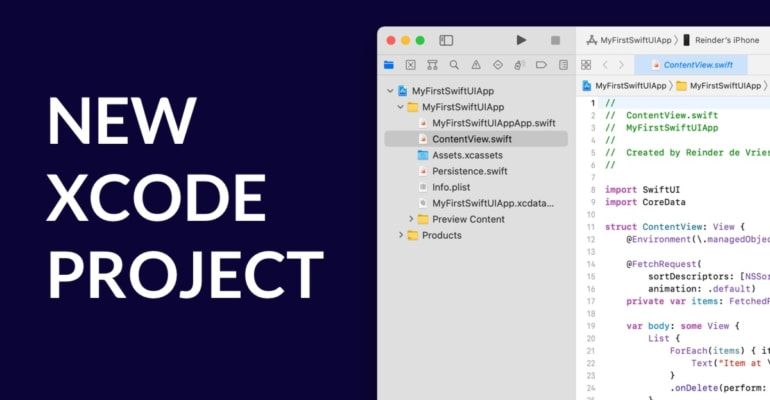 You’d think that creating a new app project in Xcode is as simple as File → New → Project…, but the wizard you’ll subsequently see actually hides a lot of interesting complexity. In this tutorial, we’ll discuss the various options you have when making a new Xcode project and their effect on your app.

We’re going to start our journey by choosing the File → New → Project… menu. The New Project wizard pops up. 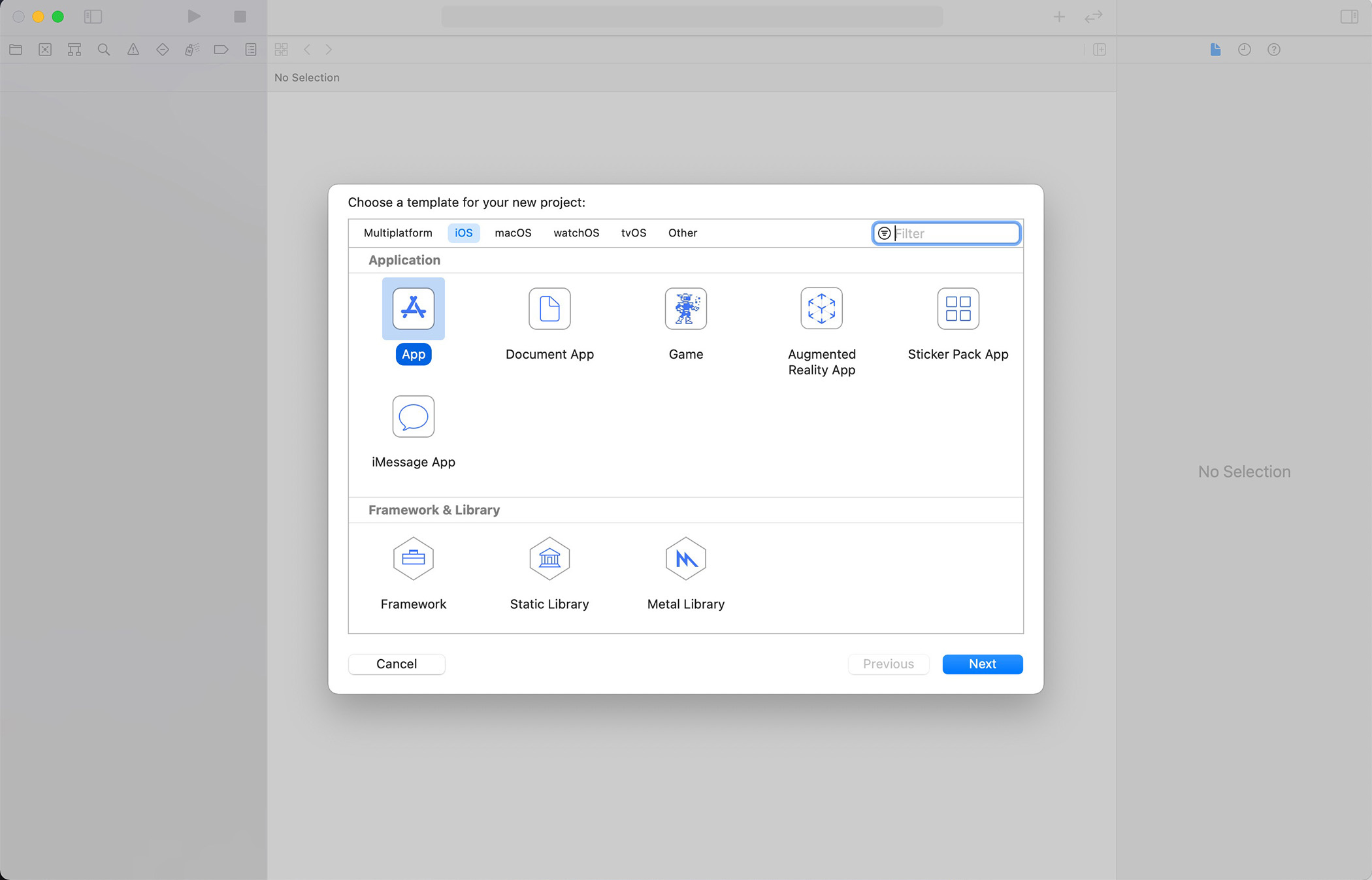 With the File → New menu you can also create a new Xcode playground, a Workspace and a Swift Package. A workspace typically spans multiple projects and build targets. A Swift Package is essentially a library, with the purpose of distributing it through Swift Package Manager (SPM).

In this step of the New Project wizard, you can choose from several project templates. In essence, each project comes with its own preset configuration options and boilerplate code.

A few of them are:

You can also pick the Framework, Static Library or Metal Library templates. These aren’t complete app projects, but rather Xcode projects that produce a library or framework. You can then export that framework to another app project or distribute it online.

At the top of the template dialog, you can see a few of Apple’s platforms: iOS, macOS, watchOS, etcetera. It goes without saying that by using these tabs you can pick templates for various platforms, such as creating a Watch app or a tvOS game. They’re still Xcode projects, but their preconfigured settings give you the right starting point for your project.

In the next step of the New Project wizard, you can choose options for your Xcode project. Check this out: 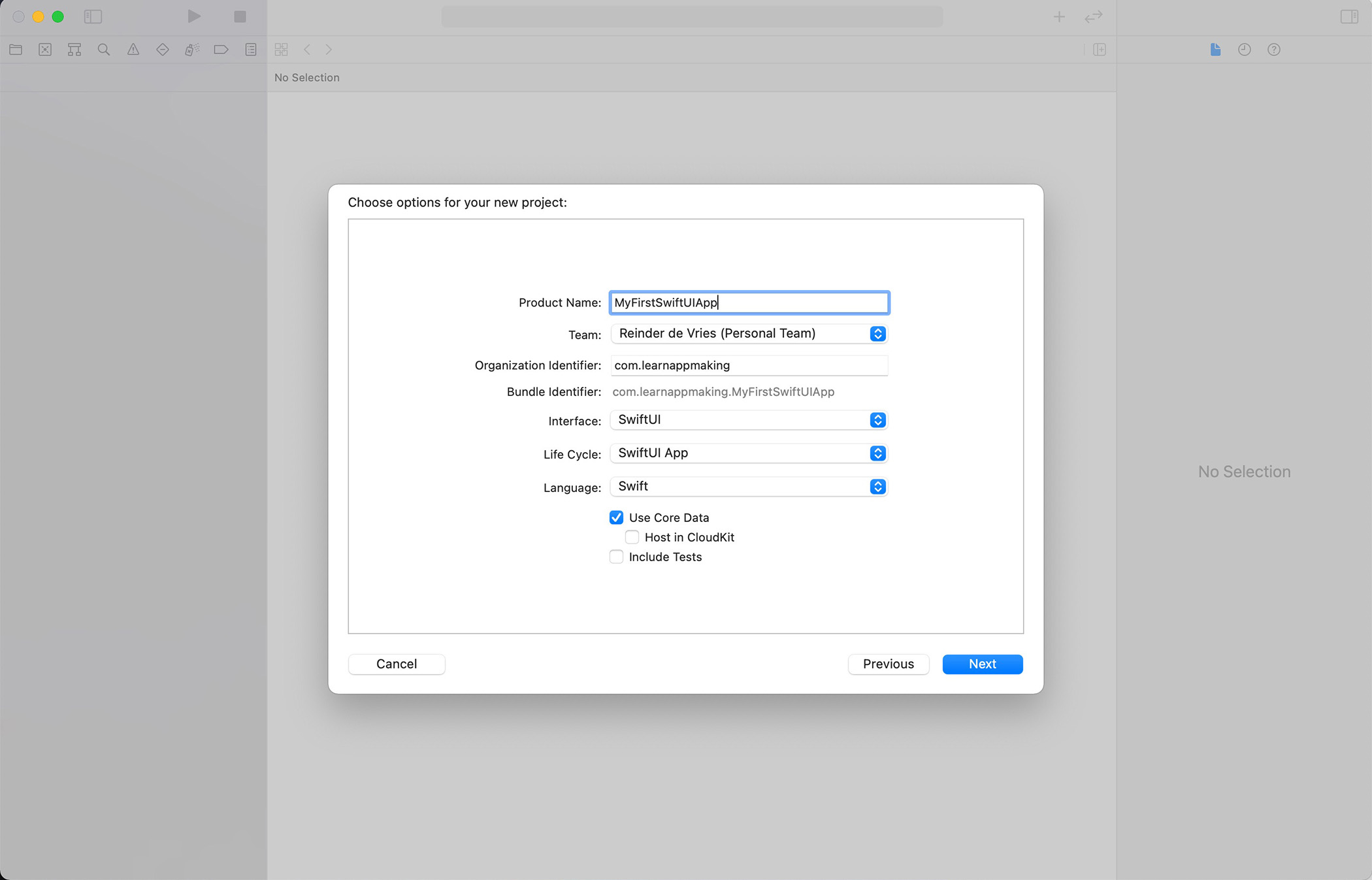 In the above screenshot, you’re looking at the options for an iOS App project. You can set a few options:

It’s worth noting here that you can change each of these options later on. You can change the name of your app, what team you use to codesign your app binary, etcetera. Some of these options, such as Use Core Data, take more effort to set up – which is why the New Project wizard is so convenient.

Especially the Interface and Life Cycle options are interesting. You can combine them like this:

What about Core Data? This setting is especially useful together with the Interface and Life Cycle options. When you tick Use Core Data, the New Project wizard will add code to your Xcode project that sets up a basic Core Data configuration. Depending on what you pick exactly, you’ll get a Core Data model file, a set up managed object context, and some code that loads simple Core Data objects.

This also introduces a more nuanced benefit of the New Project wizard. You can check out how Apple would set up a project with those approaches, and learn from it. How do you add Core Data to your project? Create a temporary Xcode project, see what they did, and replicate that in your own app. Neat!

Quick Note: It’s not uncommon for these templates to change between Xcode versions, and the templates aren’t without mistakes or dubious design decisions. At the time of writing, the Core Data + SwiftUI template (Xcode 12) can potentially cause a race condition.

The next step asks you where you want to save your new Xcode project. It’s pretty straightforward, but there are a few hidden options, too. 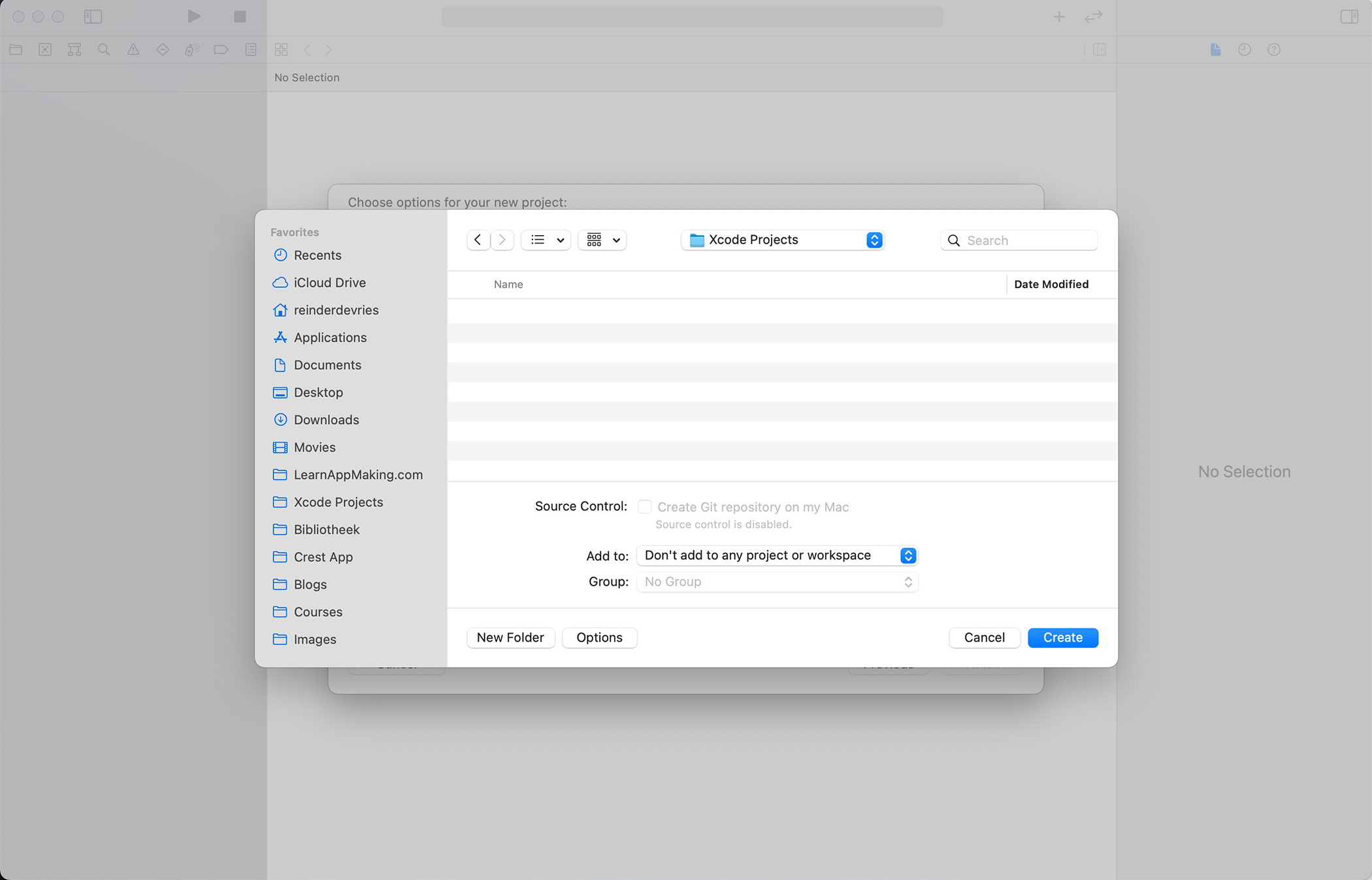 It’s up to you, of course, but consider saving all your app projects in the same root folder, like ~/Documents/Xcode Projects. You can also use Time Machine or iCloud to make automatic backups of your projects.

At this point you can also tick the Create Git repository on my Mac. This will enable source control with Git for this project. Git is a super powerful tool to manage revisions in your source code.

Xcode integrates with Git, so you can see source code changes and check out specific versions of your app. If you’re using Git outside Xcode, you can disable it in Preferences.

Managing your source code with Git deserves its own tutorial (or book, rather), but it’s a great idea to play around with it. If you’re working on your own app, see if you can use git add, git commit and git push to track new features, changes or bugfixes in your app. You can use GitHub, GitLab or BitBucket to create a private code repository in the cloud.

Occasionally, Xcode will prompt you to save your new project in a folder called Autosave Information. Don’t save the project here! It’s an internal Xcode folder with temporary project data. Instead, pick something like Desktop or Documents. (Why Xcode does this is, so far, beyond anyone’s comprehension…)

Awesome! In this tutorial we’ve opted to create a SwiftUI app with Core Data. After saving the project, we’re looking at the following set up in Xcode: 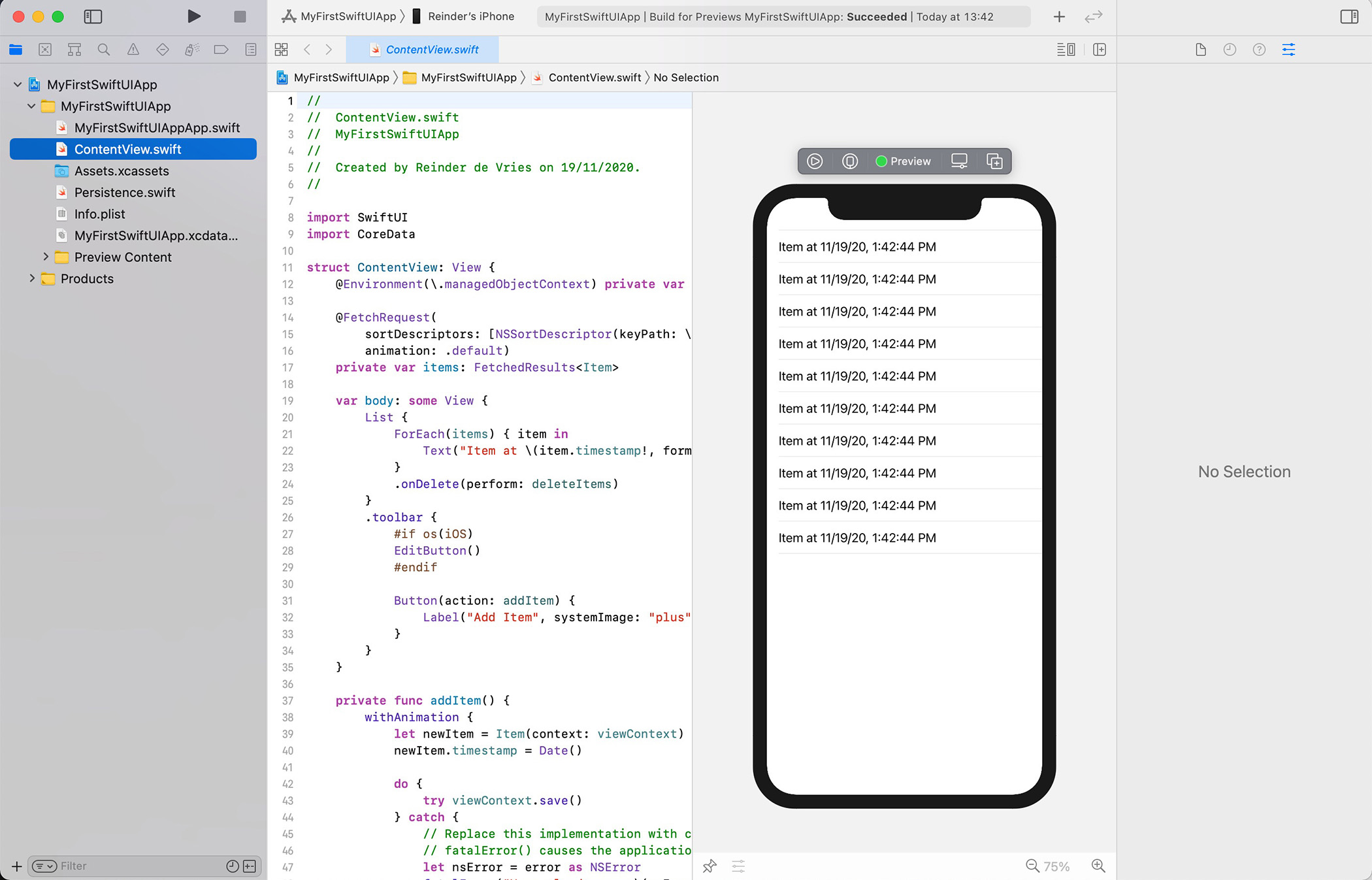 You can see that Xcode has added quite some code for us – the template – which serves as a fruitful playground to learn more about iOS development. In this specific template, for example, you can find out how to save a new object in Core Data. Neat!

SwiftUI is not yet the default UI framework for new apps, but it’s getting there. You’ll still find plenty of UIKit- or Storyboard-based tutorials online. And if you’re looking to, say, incorporate a web view in SwiftUI, it may make more sense to quickly mock up a UIKit web view project before attempting to incorporate it in your SwiftUI app with UIViewRepresentable.

Awesome! You’d think that something like a New Project wizard doesn’t need a tutorial, right? As it turns out, a new project hides a lot of complexity that we can dissect and deconstruct.

Here’s what we discussed: