Home » App Development » How To Keep Up with Swift Changes

How To Keep Up with Swift Changes

Written by LearnAppMaking on June 22 2020 in App Development, Swift 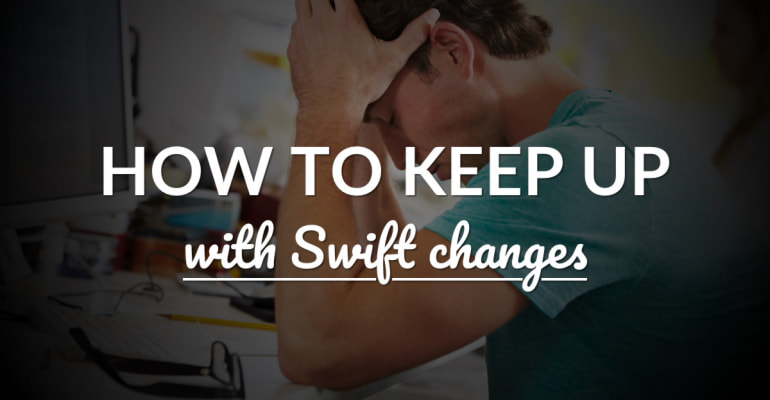 How do you deal with Swift changes as you’re learning how to code iOS apps? It’s a frustration that many beginner iOS developers share. When I recently asked iOS developers for their biggest challenges, here’s a comment I got:

The fact that Apple is CONSTANTLY changing Swift!!!

The Swift programming language is powerful, innovative and always in flux. The same is true for SwiftUI. How do you keep up, avoid learning outdated information, and stay up-to-date on latest improvements? We’ll find out in this tutorial.

How Often Does The Swift Language Change?

But is Apple constantly changing Swift? Here’s the version history for every major Swift version since the language’s inception in 2014:

When looking at the release dates, a few patterns stand out:

Where does the idea that Swift constantly changes come from?

Later Swift versions don’t have those breaking changes. Since Swift 4, versions are interchangeable, so you can use both in the same Xcode project. That means your code still runs, even when you upgrade, and you can slowly incorporate new syntax in your old codebase. Neat!

Note: Apple uses their bi-yearly product marketing schedule for the Swift language too. In the spring, Apple has their Worldwide Developers Conference, and in the fall, they often have a Special Event or keynote with product upgrades. New Swift versions follow the same structure.

How To Deal with Outdated Information

Guess what happened when Swift 3.0 was released? The code you found on Stack Overflow wouldn’t work, because it was written in Swift 2.1. Your Xcode needed Swift 3.0, so you were stuck rewriting a bit of code to the newer version. And that sucks!

I also think that the various “What’s Changed In Swift 3?” blog posts were a contributing factor to the confusion. These articles mostly list changes in Swift on a conceptual basis.

If you’re a beginner, and you read that the increment/decrement operators have been replaced in favour of the addition assignment operator, do you really know what is going on?

When learning something new, you need a “hook” to connect new information onto. This is how our mind works. When you don’t have that hook, i.e. when you can’t place a Swift change, you’re less likely to learn something.

How To Keep Up with Swift Changes

And that, fellow developer, is how the idea that Swift constantly changes got into this world. It doesn’t even change that often – but when it does, the world is slow to adopt the change…

So how do you keep up with Swift changes? A new Swift version is around the corner, and a ton of tutorials and Stack Overflow answers are still written for older versions. In fact, they have never been updated!

How do you deal with that?

Invest in a Good Course or Book

First off, I recommend you invest in a premium course or book on iOS development. When you solely rely on free iOS tutorials to learn app development, you’re guaranteed to find outdated information.

Most websites that have iOS tutorials make money from advertisements. This doesn’t incentivise them to update these tutorials, because they don’t make money when the information is helpful – only when it’s seen by a visitor.

Courses that promise you to keep information up-to-date have an incentive to update their information, because no customer wants to pay for outdated information. Likewise, books need to get a regular updates, or subsequent sales dwindle.

If you’re looking for an immersive course that has 1-on-1 support, a community, and real-world projects, I recommend my own iOS development course.

Get Better at Learning iOS Development

Second, you gotta get better at learning iOS development! Improve your mindset and become more resilient to change.

If you want to be a professional iOS developer, you better get used to things that change. Swift isn’t the only thing that changes – frameworks, libraries and SDKs change too! Alamofire, CocoaPods and tools like Fastlane change all the time.

Things that worked yesterday aren’t guaranteed to work today. In fact, I would go as far as to say that “change” is one of the biggest challenges of our profession. One day your code works, the next day it doesn’t.

Deal with it! Practice your curiosity, problem-solving skills and innovate. Things that stay the same are boring. Learn fundamental topics; they never change. Oh, and quit the habit of copy-and-pasting your code. You learn little that way!

Keep an Eye Out for Updates, News and Changes

Staying up-to-date is something you need to do actively. I bet that if you learn the intricacies of a Swift version change, you’ll become a better software engineer as a result.

The necessity of needing to understand what a nil-coalescing operator is, is exactly what leads to a deeper understanding of a programming language.

Between Swift 3 and 4, the handling of strings changed. That was an opportunity for me to dive into UTF-8 and Unicode, and how scalars work, and why exactly Swift allows you to use emojis as variable names.

It sounds cute, but it isn’t – it’s awesome software engineering. I learned a lot that day, and that’s a habit you want to cultivate!

Where do you listen in on Swift changes? I’ve included some spots to put your ear to the ground, below.

I hope that you now understand that Swift doesn’t change that often, and not that much.

It’s just that the past changes had a big impact on how beginner iOS developers learn the language. It’s something you gotta embrace, because it makes you a better software engineer. And keep an eye out for next March and September!

Don't Copy-and-Paste Code (Unless You Understand It)