Home » App Development » How To Download, Install and Update Xcode

Written by LearnAppMaking on September 1 2020 in App Development, iOS 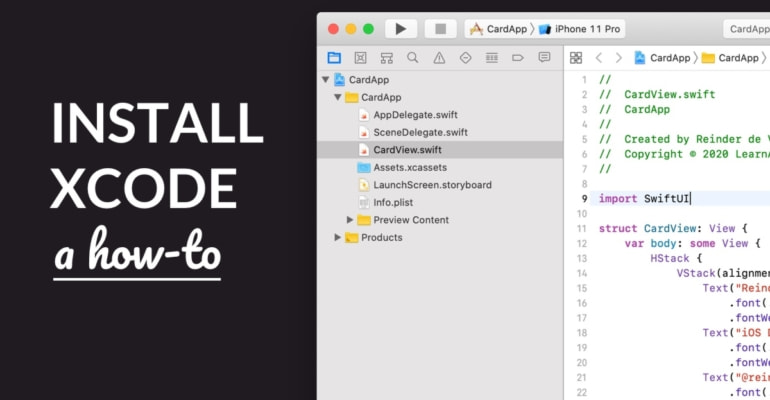 Xcode is the Mac app that developers use to create apps for Apple’s platforms, like iOS. In this tutorial, you’ll learn how you can download and install Xcode on your Mac.

Xcode can only be installed on a Mac. Want to build apps with a PC? Check out your alternatives here.

How do you download Xcode for macOS? You’ve got a few options:

Let’s walk through the approaches you can use to download and install Xcode on your Mac, and their advantages. We’ll start with the Mac App Store, because that’s the simplest option.

Here’s how you can download and install via the Mac App Store: 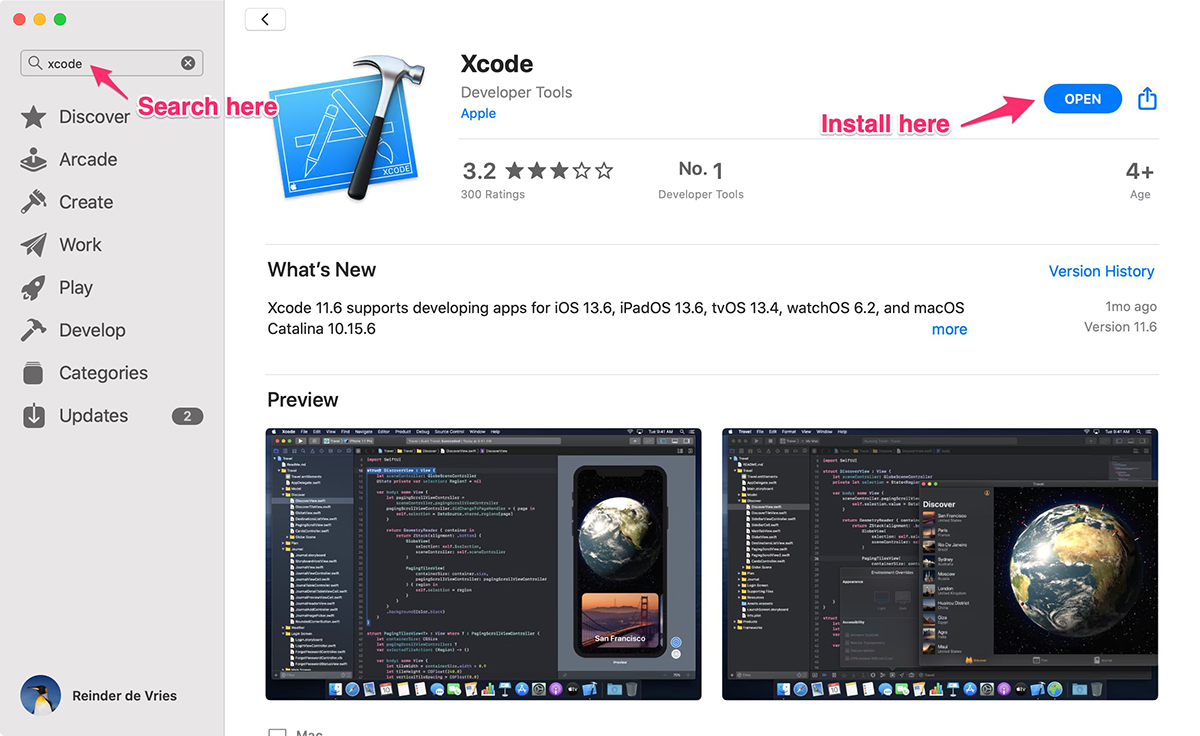 There are a few things you should know, though. Xcode is a huge app, about 7 gigabyte (GB) in size. You’ll need about 15 GB of free space on your Mac to install Xcode this way.

Installing via the App Store is simple, easy and seamless. Unfortunately, issues with downloading, like a lost connection, etc., usually means you’ll have to reattempt the download.

Author’s Note: Installing Xcode via the App Store never maxes out my download speed — not even close. On a 500 Mbps fiber line, it regularly drops down to 200 KB/s.

Installing Xcode via the Mac App Store is as simple as clicking Install. However, there’s an approach that gives you more control: developer.apple.com/download.

This will download a .xip file, which includes Xcode. The download size is currently about 7 gigabyte (GB). You’ll need at least twice that size of free storage on your Mac to install Xcode with this approach. Downloading Xcode this way is often faster than through the Mac App Store. 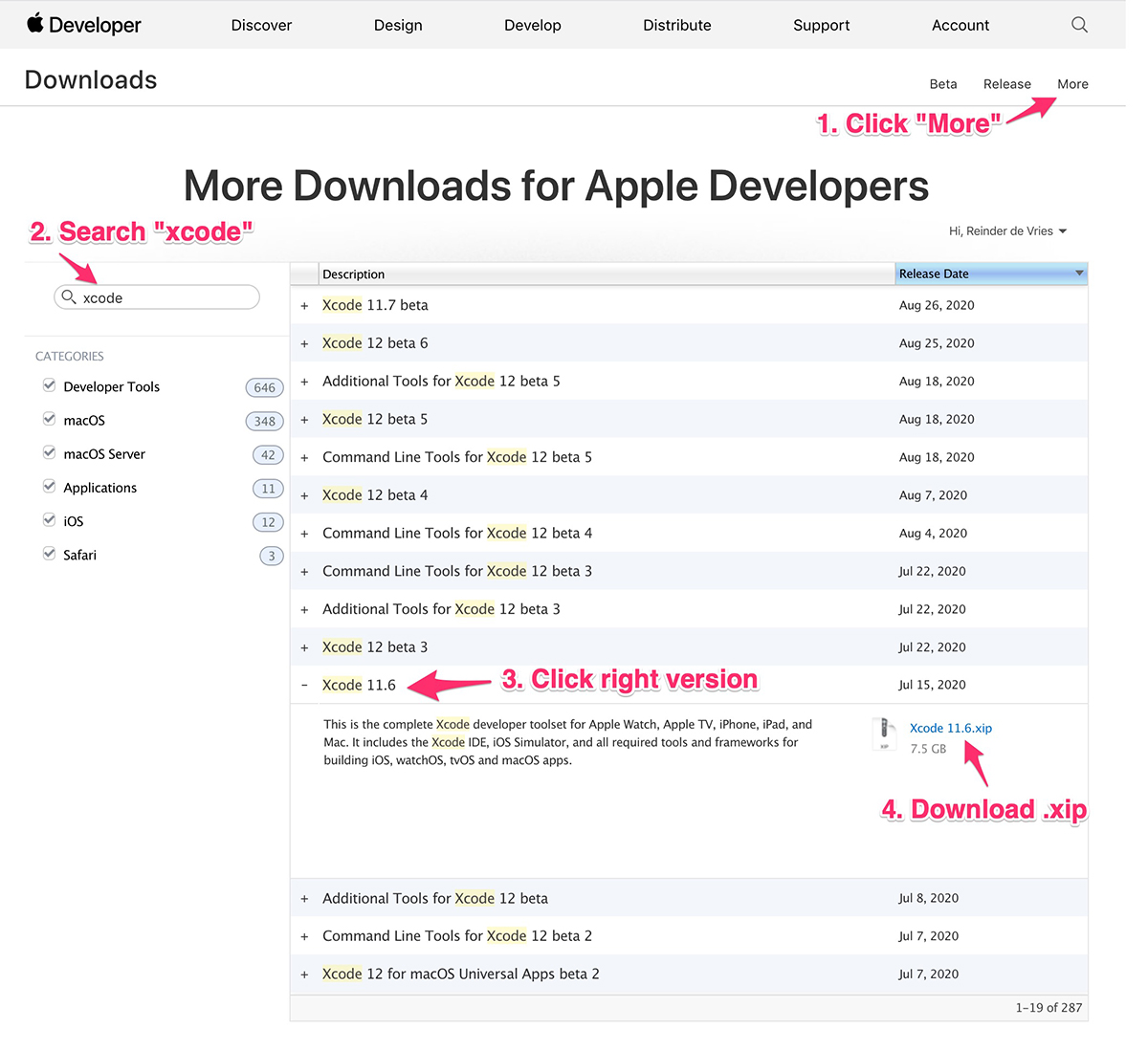 Once you’ve downloaded Xcode, open and unzip the .xip file. This may take a while. You can then drag-and-drop the Xcode.app file to your ~/Applications folder. Finally, start the Xcode app. You’ll be greeted with the following prompt:

Click Install in this prompt. Xcode will now attempt to install the Xcode Command Line Tools on your Mac. They are CLI tools used to compile apps with Xcode, among other things. You often need these tools to work with other programming languages on Mac, as well.

A disadvantage of manually installing Xcode through the Developer portal is that Xcode won’t automatically update. This isn’t necessarily a bad thing, however, because you can use this approach to install multiple versions of Xcode side-by-side. This is helpful for debugging or trying out beta versions of Xcode (see below). 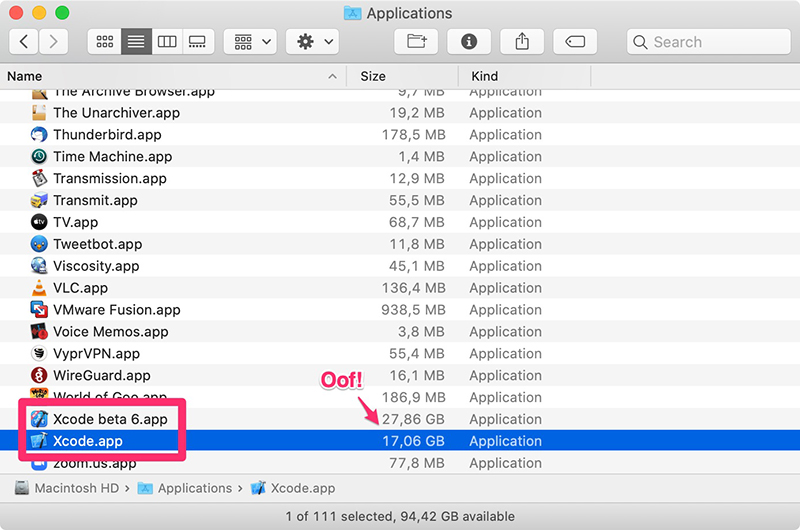 There’s another, more hidden benefit. Installing Xcode through the Mac App Store limits you to the most recent version of Xcode. If your version of macOS or Mac OS X doesn’t support the latest version of Xcode, you can usually install older versions via developer.apple.com!

Updating Xcode to The Latest Version

How do you keep your Xcode up-to-date? Apple regularly releases new versions of Xcode. They typically include bug fixes and performance improvements, as well as new Xcode features, like the minimap.

More importantly, new Xcode versions include new versions of the iOS SDKs, Swift and SwiftUI. You can only use these new technologies with the latest versions of Xcode.

You can update your Xcode to the latest versions like this:

How do you know if Xcode has a new version?

By the way, there’s a 3rd way to download and install Xcode on your Mac. It’s called mas-cli, and it’s essentially a Command Line Interface (CLI) wrapper for the Mac App Store. It uses the App Store – from the command line… Nice!

You can then list apps installed through the App Store on your Mac, with:

Then, copy the numerical code you see on screen to install Xcode:

Author’s Note: As I understand it, you’ll need to have installed an app via the App Store before you can install it again with mas-cli.

Apple regularly releases beta versions of upcoming software, like iOS, macOS and Xcode. This enables developers to try out new features before they become available to the general public, and provide feedback and bug reports back to Apple.

How can you download and install Xcode’s beta versions? Here’s how: 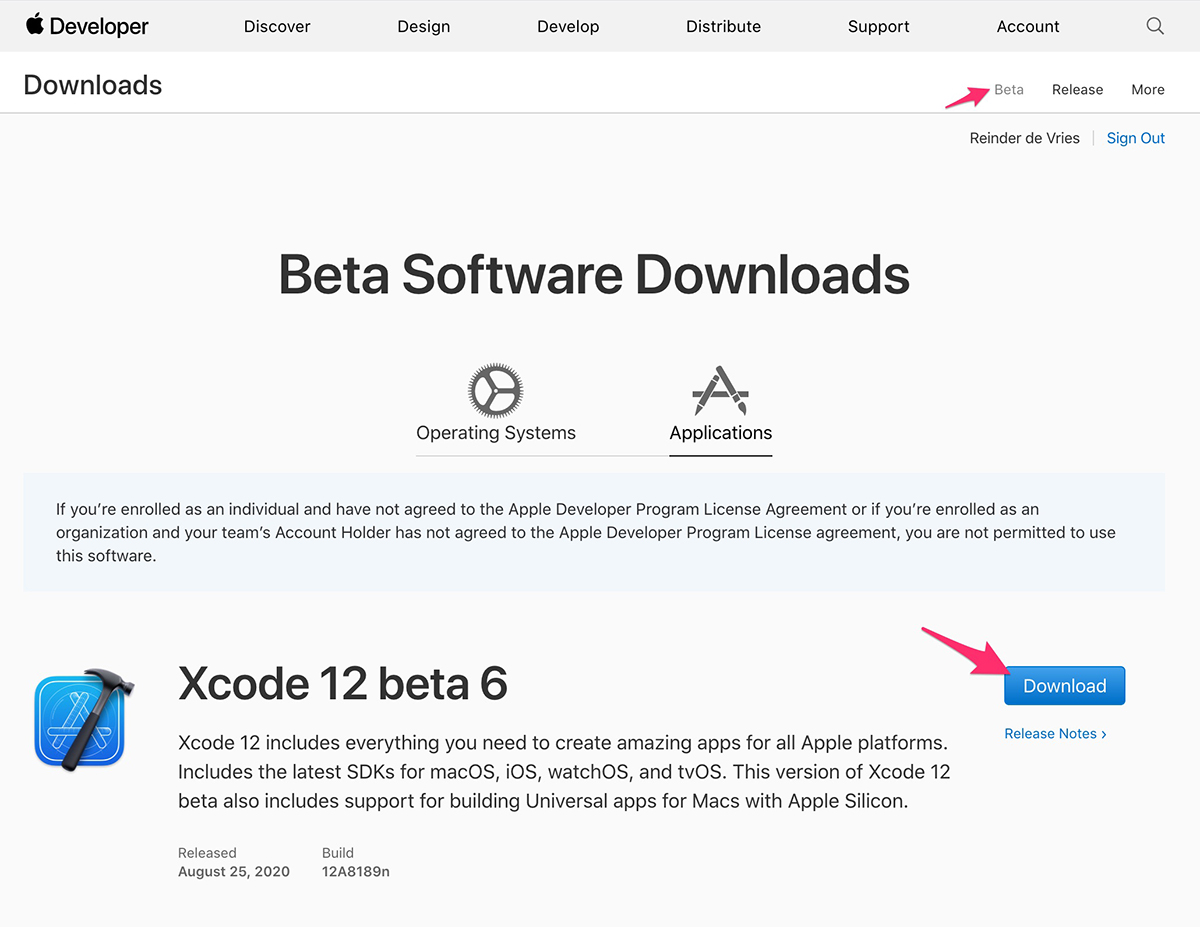 As we’ve discussed before, you can install multiple versions of Xcode side-by-side with this approach. You can, for example, have the regular Xcode installed via the App Store, and install a beta version of Xcode next to it.

You don’t need to have a paid Developer Account to install betas of Xcode. Just use the free Apple Developer Account. It can occasionally happen that Apple restricts beta software to paid subscribers only, however.

If you’re installing multiple Xcodes, change their filenames to reflect their versions. That makes it easier to tell them apart! Just so you know: when you switch between installed Xcode versions, you usually get that “Install additional components” prompt again. There are ways around that, but it’s simplest to just let it install again whenever Xcode needs to.

Managed to install Xcode on your Mac? Awesome! Now you know how to install Xcode’s betas next to it, and keep everything up-to-date. Here’s what we discussed in this tutorial: