Home » App Business » How Much Does It Cost to Build an App?

How Much Does It Cost to Build an App?

Written by LearnAppMaking on May 19 2020 in App Business 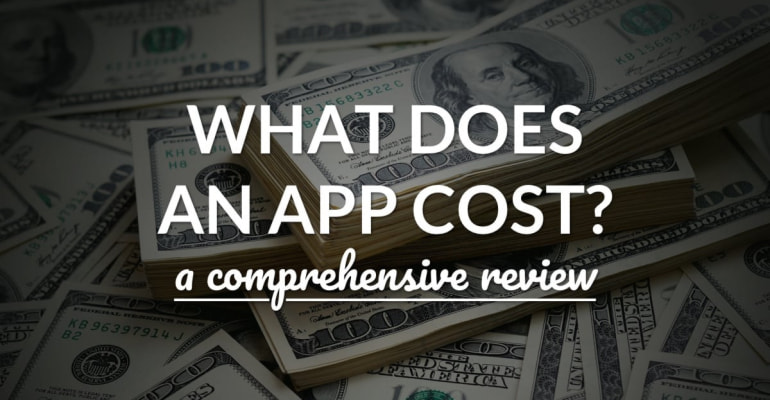 How much does it cost to build an app? In this tutorial, we’ll discuss the costs of app development and what factors determine the cost of building an iOS app. Whether you’re buying or selling – here’s how you can get a good price for your app.

Author’s Note: Since 2009 I’ve built a few dozen iOS, Android and web apps for my clients. I’ve been involved in app development projects ranging from $5.000 for a prototype, to $500.000+ for multi-year RFP’s. What we’re discussing here in this tutorial is based on my experiences as a professional software developer.

How Much Does It Cost to Make an App?

It’s the ultimate question if you want to have an app built. How much is this app going to cost? Any decent developer or agency will tell you: it depends.

But… depends on what, exactly? A few factors an app’s cost depends on:

On top of that, many app development projects require additional services, such as graphics design, UI/UX design, prototyping, user testing, and input from subject-matter experts (think chef, for a recipe app).

How much it costs to make an app also depends on who is going to develop it. The same app costs differently depending on who you ask. A small dev shop might charge more than a freelance iOS developer, but that higher cost comes with advantages.

Lastly, how much an app costs also depends on culture. A prototype built by a sole developer may be “cheaper” than that same app built within a corporate organization. You might pay more for an identical app built by a prominent or popular agency. It’s counter-intuitive, but some corporations will not consider a quote or tender (RFP) below a certain price – even when the proposal is better but cheaper than the alternatives.

Before we continue, there are two principles you need to understand:

Just so you know, monetary values listed on this page are in US Dollars (USD).

The cost of app development depend on who is going to build your app. Let’s discuss how that works. We’ll differentiate between:

In-house development
Making an app in-house is undoubtedly the most expensive of these 3, even though development shops and agencies probably charge a higher price for an iOS development project. Wait… how’s that even possible?

When you hire and employ a software developer in-house, you have to pay them a salary (obviously!). App developers are currently hired at a premium, because demand outstrips supply. On top of that, you’ll need to provide a workspace, pay taxes, pay for insurance, etcetera.

Depending on your geographic location, a good in-house developer costs between $50.000 and $150.000 yearly. Once you’ve found an app developer, you’ll want them to stick around for as long as possible, possibly offering them a contract for an indefinite time period. This makes the cost of building an app in-house an expensive option.

When outsourcing with a dev shop, the costs of app development are affected by the features you want to built into an app. We’ll discuss how in the next section. If you end up hiring a dev shop, it’s important that you define a clear project scope.

Freelance/sole iOS developer
Hiring a freelance iOS developer is a great option for small-to-mid scale apps with a clear project scope. You can outsource to a local developer or work with a remote developer from around the globe. You can potentially benefit from geo-arbitrage by hiring a developer who’s in a different region. You can find developers for hire via platforms like Upwork, Toptal, Freelancer or Codementor.

The price ranges, skills and app costs differ greatly between freelance app developers. It’s smart to hire a developer with a good track record, and optionally hire them for an initial paid try-out project first. Depending on the iOS developer, a prototype app can cost as little as $10.000. Larger, more complete apps can easily cost between $25.000 and $50.000.

Now that we’ve had a look at different ways of outsourcing app development, let’s discuss how the features factor into a app’s costs.

You can find detailed overviews of developer salaries and fees per country on StackOverflow and PayScale.

How Features Affect an App’s Costs

The biggest obstacle here is that you, the person who hires the app developer, may not have a complete or accurate idea about how much time it takes to build a particular app feature.

This characteristic of app development projects is what makes it so difficult to estimate fixed-price projects accurately. It’s also a difficulty in working with developers you don’t yet know, e.g. you don’t know the quality of their work and how they price their services.

It’s a smart idea to get to know your developer or team of choice prior to signing off on an app project. It also pays dividends to outsource any future app projects to a developer or team you’re familiar with. It’s a win-win when you both invest in your relationship, which affects the costs of (future) apps.

Did you find a potential developer or team? It’s a smart idea to start with a discovery phase. You set up an initial meeting with the developer (or team) and walk them through your requirements for the app.

Your developer has the opportunity to comment on your ideas, and help you decide which features are worth keeping. A good developer will be able to explain to you what goes into building a particular feature, so together you can decide what features to keep or discard.

Based on this discovery meeting, the developer can estimate how much the app costs, create designs or mockups, and provide you with a project quote. You can then negotiate the quote, accept it, or take the project somewhere else.

A skillful, trustworthy developer (or agency) will charge for this initial discover phase, because they’re providing you with valuable insights. You know what they say about free advice!

The cost of building the app isn’t the only cost associated with your project. Depending on your app project, app costs can also include:

On top of that, you may want to continually expand your app, and build new features for your users, which affects the total price of the app. It’s a smart idea to start an app project with a fixed scope, and once that’s built, continue building the app with a sub-project per feature.

It’s important you ask a developer or team up-front about additional costs associated with the app. You’ll need to pay for the $99/year Apple Developer Program, for example. If your app uses a paid 3rd-party API or SDK, like Google’s Cloud APIs, you may need to pay for usage beyond their free tier.

Most apps these days rely on a cloud-based tech stack, and they aren’t free. The basic plan for Firebase costs $20/month, and a simple DigitalOcean virtual private server (for back-end hosting) starts at $10/month. Depending on the amount of users your app has, these services can costs hundreds or thousands of dollars a month.

It’s a smart idea to investigate these cost factors up-front, so you can choose a vendor with a good balance between price, quality and ease of development. For a simple app, it’s likely cheaper to use a ready-made cloud back-end provider such as Firebase, compared to building a back-end infrastructure from scratch.

A good, skillful developer will be able to guide you through these decisions, and help you understand how they affect the cost of the app project.

Before you move on, let’s do a quick recap. Here’s what we discussed:

Is building an app cheaper or more expensive than you anticipated? Whatever the case – in this tutorial you learned what factors affect the cost of building an app. And you can always learn iOS development yourself!

How to Screw Up an App Project