Written by LearnAppMaking on June 24 2020 in App Development, iOS 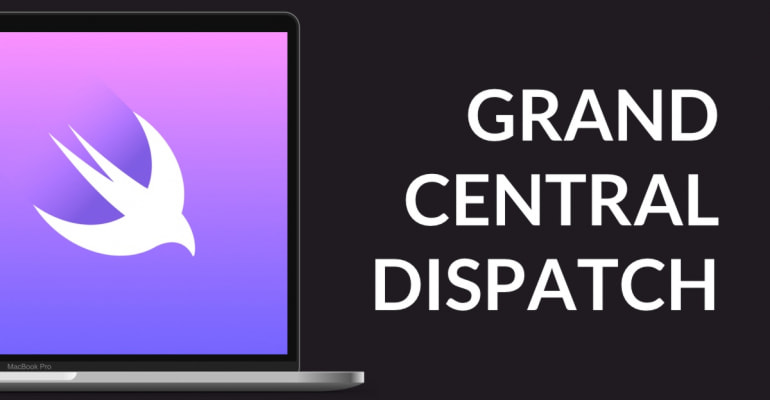 Computers can’t live without multithreading and concurrency. You know why? CPUs are kinda dumb – they can only do one thing at a time! You can use Grand Central Dispatch (GCD) with Swift to make your app execute multiple tasks concurrently. Grand Central Dispatch is paramount to keep your app responsive, with buttery smooth animations and transitions.

Here’s how you can execute a task asynchronously in Swift:

But what exactly is “async”? To answer that question, we’ll need to discuss multithreading first.

An iPhone has a CPU, its Central Processing Unit. Technically, a CPU can only perform one operation at a time – once per clock cycle. Multithreading allows the processor to create concurrent threads it can switch between, so multiple tasks can be executed at the same time.

It appears as if the two threads are executed at the same time, because the processor switches rapidly between executing them. As a smartphone or desktop user, you don’t notice the switches because they occur so rapidly. Performing multiple tasks at the same time is called concurrency.

A common example is the UI thread. Ever noticed how apps can still appear responsive and have smooth animations, even though the CPU is doing a lot of work? That’s because of multithreading.

On an iPhone, the UI always has its own thread. When you’re downloading a file from the web, or executing a complex task, the UI remains responsive and smooth.

Then what about multicore CPUs? Such a CPU, often called a System-on-a-Chip (SoC), typically has multiple CPUs in one. This allows for truly parallel processing, instead of the concurrency by rapidly switching of multithreading.

In reality, multicore processing isn’t exactly parallel. It depends greatly on the type of work the processors are executing – but that’s a topic for another article.

To summarize, multithreading allows a CPU to rapidly switch between multiple tasks in such a way that it appears as if the tasks are executed simultaneously.

Running Code in the Background

As an app developer, you want to keep your app responsive. Say you’re sending an update back to your cloud-based database, saving a note the user has stored in your app.

In the pseudo-code example above we’re creating a note object, which is saved in the background. When it has been saved the completion handler (a closure) is executed, showing an alert dialog to the user.

The saveInBackground() function will use some form of concurrency. The Cocoa Touch SDK has several options for concurrency, of which Grand Central Dispatch (GCD) is the most common.

You regularly see APIs mention that they use background or “async” processing to complete a task. You now know that this API uses any of the approaches for multithreading, and that this task is performed parallel to the main thread. Good to know!

There are a number of reasons for that, but the foremost reason is to avoid race conditions. A race condition occurs when two tasks are executed concurrently, when they should be executed sequentially in order to be done correctly. Conversely, some tasks should only be dispatched asynchronously to avoid a deadlock.

Drawing the UI on the screen of the iPhone is such a sequential task. The same goes for resolving Auto Layout constraints. You can’t change the constraints while they’re being calculated.

What if you execute a synchronous, blocking task on the main UI thread? The thread will wait until the synchronous task is executed. As a result, your apps UI may stutter, lag or become unresponsive for some time.

We can derive a few first principles from this:

The good news is that we can do both with Grand Central Dispatch! We’ll move some task to the background, and then bring its result back onto the main thread to update the UI.

When you need tasks executed concurrently, should you just go about creating a bunch of threads? Fortunately not! iOS has a terrific mechanism for working with concurrent tasks called Grand Central Dispatch.

The name “Grand Central Dispatch” is a reference to Grand Central Terminal in downtown New York. Imagine the CPU as a bunch of railroads, with the traincars as tasks being executed on those lines. A dispatcher is moving the cars along the railroads to ensure that they reach their destination quickly on a limited number of lines.

Grand Central Dispatch is a wrapper around low-level code, to create threads and manage code. Its emphasis is on dispatching, i.e. making sure that a number of tasks of variable importance and length are executed in a timeframe as reasonable as possible.

In the example above, an asynchonous task is dispatched with async(). The code that’s executed asynchronously is written in the first set of squiggly brackets { }. It’s a closure that’s executed in the background.

The async task is dispatched to an operation queue, and given a Quality-of-Service priority. Queues help us schedule tasks after each other, and the QoS priority indicates which tasks are more important to complete soon – but more on that later.

When the async task finishes, another async() call is made to execute another task on the main thread. You can’t update your app’s UI outside the main thread, as a rule, so that’s what that inner closure is for.

Next, we’ll discuss Quality-of-Service and queues.

Why are we calling async() on the main thread? Wasn’t that forbidden and/or isn’t the main thread synchronous-only? Without getting into too much detail, it’s important to understand that async() dispatches code asynchronously. When it’s synchronous code, the thread will block until the task completes. If we’d call sync from our background thread, that thread would block until code completes on the main thread (mind-boggling, I know). That’s not only inefficient, it could also potentially create a so-called “deadlock”. A deadlock happens when two resources (i.e., tasks or threads) are waiting on each other to complete. As a result, they never do, and your app crashes.

Let’s check out that code again:

The function global(qos:) is called on class DispatchQueue. This function returns a reference to the global dispatch queue, on which we call async(_:). The global(qos:) function takes a parameter: the Quality-of-Service (QoS) or “priority”.

In essence, the QoS tells the dispatcher how important the task that’s dispatched is. More important tasks are executed earlier on the dispatch queue, have more system resources available, and thus complete quicker than the same task with a lower priority.

Higher QoS tasks use more battery power, so defining the right QoS ensures that your app uses power and memory as efficiently as possible. Avoid the urge to mark every task as “important,” because it’ll only mark them as equally important and thus negate the entire priority system.

It’s important that Quality-of-Service and priority aren’t exactly the same. iOS will give tasks with a higher QoS more priority, but it’ll also throttle tasks up and down based on other aspects of the OS environment.

iOS has four Quality-of-Service levels, from highest to lowest priority:

You can also use .default, after which QoS information is inferred from the context of your code.

Alright, back to the code:

We’re seeing two calls to async(). The first one on the global queue, and the second one on the main queue. So… what’s a queue?

A dispatch queue is simply a pool of tasks. Grand Central Dispatch will determine which tasks are executed. It’ll also determine how much CPU time those tasks get. More CPU time means a quicker completion.

Think back to that train terminal dispatcher. Which traincar is more important; which should get to its destination the quickest? The dispatcher can only move one car at a time, and moving one car forward more means delaying all the other cars.

The dispatcher takes an informed decision and lets all tasks run until they complete, giving preference to more important tasks (QoS). It’ll also assign tasks to different CPUs – the iPhone 11 Pro, for example, has a multicore SoC with 6 CPUs. Execute two tasks on two CPU cores, and they’re executed in parallel!

It’s compelling to think that tasks on a dispatch queue are executed one after the other, and you wouldn’t be wrong. After all, when we queue up at a supermarket or icecream parlor each of us gets served after the other. However, a queue has a prioritization mechanism based on Quality-of-Service. A background task is less important than a user-interactive task, so the user-interactive task gets more CPU power and completes sooner.

Fortunately you don’t have to manage all those priorities, queues, threads and tasks yourself. That’s the kind of managing Grand Central Dispatch does!

Grand Central Dispatch has a number of options for concurrent execution, with async() being the most notable one. Another is asyncAfter() for delaying a task to be executed in the future:

In the example above, a constant delay is defined. Its value is a point in time relative to the default clock, kind of like a time interval measured from “now.” The asyncAfter(deadline:) function then simply takes that interval, and a closure, and executes the code when the delay interval time is reached, i.e. 60 seconds into the future. Neat!

You use multithreading and concurrency to ensure a smooth user experience, while doing lots of stuff at the same time. The UI remains responsive, while you complete an intensive or lengthy task in the background.

Grand Central Dispatch is one approach for concurrency on iOS, which we’ve discussed in this tutorial. Awesome!