Going from Coding Tutorials to Building Your Own App Projects

Written by LearnAppMaking on May 28 2020 in App Development 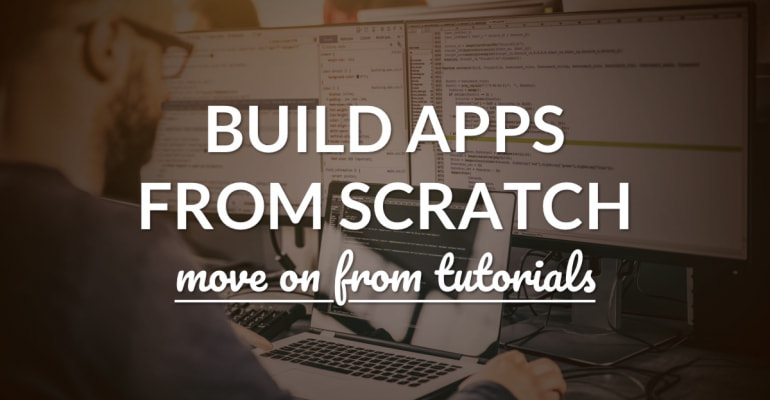 How do you shift from coding tutorials to building your own app projects from scratch? Tutorial purgatory is a real problem, and in this tutorial we’re going to discuss how you can overcome it. Less following instructions, more writing your own code.

Ready? Let’s get good at this stuff!

The Problem: Stuck with Coding Tutorials

Before we move on, let’s start at the beginning. What exactly is the problem we’re dealing with here?

This is what I hear over and over again from beginner coders:

Some people call it tutorial purgatory: you’re stuck with coding tutorials, and you’re struggling to move from following tutorials to building your own app projects.

You’re proficient in following tutorials and you understand the code from the tutorial. But when you’ve started a new project in Xcode, it’s as if you’ve completely forgotten how to code!

In this tutorial, we’re going to discuss how you can successfully shift from following coding tutorials to writing your own code and building your own app projects. We’ll focus on Swift programming and iOS development, but the same techniques and principles apply to any programming language and platform, too.

The foundation for shifting from coding tutorials to building your own apps, is, in fact, your own app project.

We’re immediately diving into the deep end here. Abandon only learning from coding tutorials right now, and start your own app project! There is no middle ground.

What are you going to build? Answer that question for yourself. Here’s some beginner app project ideas:

Your goal is to pick a project that’s interesting enough for you, so you’ll have intrinsic motivation to complete it. I’m a to-do list nerd, so I’d happily nerd out over building a gorgeous, slick and clean to-do list app. What’s something you would want to build?

It’s also smart to pick a project that’s juicy, but not too complex. You want to build an app project that has enough opportunity for learning, but isn’t completely out of your league. This is why building a social media app isn’t recommended.

If an app project is to challenging to build, you’re more inclined to give up. Constantly being frustrated because of bugs and errors isn’t motivating either, and it doesn’t help your learning curve as much as a challenging-but-not-too-challenging app project would.

Found a project you like? Don’t immediately search for coding tutorials that teach you exactly how to build the app project you picked. Your goal is to build it from scratch, not to follow someone else’s instructions.

Let’s move on to the next step, which is planning.

The next step is planning your app project. We’re going straight for the gold medal here; no half measures! Don’t worry, we’ll discuss plenty of strategies and approaches, next.

A beginner mistake plenty of app developers make, is starting to build their project immediately after coming up with an app idea. This isn’t an ideal approach, because later on in the project you get tangled up in decisions you should’ve made before starting the project.

An example: You’re making a social media app with a local database, like Realm, but later on you realize that app users need to be able to interact with each other. A cloud-based back-end, with user authentication, would have been a smarter choice. It sucks to go back and rewrite a large part of your app…

What do you do instead? You plan your tech stack ahead of time. A few questions you can think about:

Let’s discuss a few of those questions more in-depth.

In How To Think Like a Programmer, we’re discussing how learning to code requires you to come up with your own workflow for solving problems. The same principle applies here, so it’s important you’re clear on how problem-solving works for you.

What features should your app have? Designing them can be as simple as scribbling some notes on a piece of paper.

Let’s say you are going to build a to-do list app. What features should it have?

Based on these features, you can define User Interfaces (UIs) that should go into your app. A few ideas:

This list gives you a good idea of where you need to look to build this app. Don’t know anything about view controllers? Start learning there, then come back to your app, and implement what you’ve learned.

Quick Note: Although it’s a compelling idea to add new features to existing app ideas, I want to caution against it. If you don’t move on to building app projects from scratch, you still stay stuck in coding tutorial limbo. It’s OK to expand apps, but also invest time into learning to build from scratch.

Every app stores data of some kind, either offline or in the cloud. How are you going to structure your app’s data?

The kind of data storage you need depends on your app project. You want to keep it as simple as possible, of course. Some examples:

The requirements you have for a database platform are based on how your app works. It’s a good idea to take a look at your app’s features, its UI and its mockups to get a feeling for what kind of database you might need.

You also want to design your app’s data models. What structured data do you need to store, and what are the properties of those objects? For example, a Todo object has the following properties:

You can check if a to-do item has been completed by seeing if it’s completionDate property has been set. When it’s nil, the task is not completed yet.

What kind of query do you need to get pending tasks?

See how that works? Once you start “thinking in data”, it’s easy to figure out what the data models, properties and database your app needs. This helps you make the right tech stack decisions prior to building your app project.

Don’t reinvent the wheel by programming everything in your app project yourself. Save time by adopting open-source libraries, frameworks and tools that make your life easier.

When you start a new app project, ask yourself: “What third-party tools and libraries can I use?” A few examples:

There’s so much open-source code out there! Maybe a library already has what you’re trying to build. You can implement the library, change some of its properties, or even fork its code and change it yourself.

It’s smart to keep the number of 3rd-party tools and libraries that your app relies on to a minimum. Use 1st-party (i.e., provided by Apple) whenever possible, because they’re often suitable enough. For example, if you need to make a few simple web request, then URLSession probably fits the bill.

Xcode integrates with a few dependency managers, to make working with third-party libraries easier. You use ’em to add 3rd-party libraries to your project. You can choose between Swift Package Manager (recommended), CocoaPods or Carthage.

Awesome! Now that you’ve planned your app project, let’s discuss how you can move forward with actually building it from scratch.

Learn to Code Without Tutorials

Next, we’re going to focus on learning to code without coding tutorials.

The plan you’ve come up with so far gives you a good idea of where you need to look to build this app project. Don’t know anything about Xcode or Swift or view controllers? Start learning there, then come back to your app, and implement what you’ve learned.

This is the fundamental principle for moving from coding tutorials to building your own apps from scratch. I can’t overstate this enough! The “trick” is applying what you learn in tutorials in your own app projects.

Should you completely move away from coding tutorials? No! They’re good learning resources, just like books, courses, screencasts, webinars, podcasts, and everything in between. It’s about applying what you’ve learned.

Let’s discuss how that works practically. We’ll use that to-do list app idea as a starting point. Here’s what’s next:

See how that works? You’re not stopping after you’ve finished the coding tutorial, but you’re using it as a stepping stone toward successfully implementing it in your own app project.

It’s a two-pronged approach: first you get comfortable with a new topic or technique, and then you apply it in your own project.

What if you only complete one of those two steps?

Remember Mr. Miyagi from The Karate Kid, and “Wax on, wax off“? It’s the perfect analogy for learning how to code!

You first want to practice your moves — by waxing cars, sanding the floor, painting — and committing them to muscle memory. By the time you’re ready to practice real Karate, you’ve sufficiently ingrained the movements that they almost automatically start to make sense. You’ve been practicing defensive blocks all along, and you then transfer those skills to actual karate.

It’s the same for you, when learning how to code. You “break out” the topic, practice it, and then weave it back into your app’s implementation.

What’s next for you? Make a list of techniques, approaches, topics, frameworks etc. you want to use in your app project. Find tutorials, books, courses that teach you more about them. Work your way through the list, completing tutorials, and make notes while you’re learning. Finally, apply what you’ve learned in your own app project.

Quick Note: I’ve seen first-hand how powerful it is to learn how to code with friends. Why don’t you jump on a Zoom/Jitsi/Skype/Meet call with a fellow coder, and work through a coding tutorial together?

The fundamental principle behind moving from coding tutorials to building your own apps, is applying what you learn in your own app projects. You discover topics and techniques you need to learn by planning your app project well. You then move on to learning more about these techniques, practicing with them, and finally implementing them in your own project.

The end goal is to complete your own app project. Once you’re done, you’re free to move on to the next app project, and the next. Meanwhile, you’ve learned a ton about building iOS apps. And the further you get, the more you learn about learning iOS development. Your learning techniques improve, and you start to develop a solid workflow for building your expertise. Awesome!