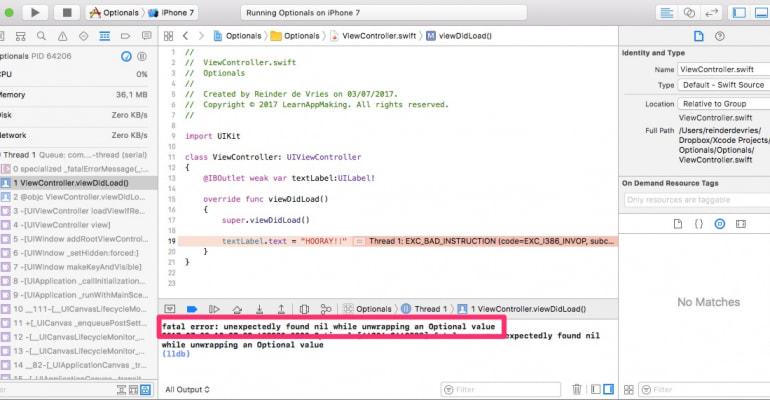 Optionals are a great feature of Swift, but if you don’t unwrap them safely you’ll run into the Unexpectedly found nil while unwrapping an Optional value error. How can you solve this error?

In this article, you’ll learn about:

Understanding optionals, and fixing bugs, is an important part of iOS development. It’s critical to understand optionals as an app developer!

For an extensive tutorial about optionals, make sure to check out: How To Use Optionals In Swift: The Ultimate Guide.

In Swift, Optionals are a special generic type that …

A variable can only be nil when it’s an optional. You declare an optional like this:

The question mark ? at the end of the type declaration denotes that the variable meaningOfLife is an optional. Therefore, this code is OK:

The variable meaningOfLife is an optional, so it can be nil. The next example, however, is invalid:

Because age isn’t an optional, it can’t be nil!

Optionals are a powerful feature of Swift, because they make your code safer and less error-prone. As a result, optionals make you more productive as a developer, because you spend less time on fixing bugs.

But… why do you need optionals?

You already know what variables are. In your app’s code, some variables can have no value at certain times:

In Swift, an optional can either have an ordinary value, or be nil. When a variable has no value it is nil.

Almost every programming language has something similar to nil. It’s undefined in JavaScript, null in Java and NULL in PHP. In these languages, to avoid runtime errors with variables that have no value, you have to remember to check if a variable is null. You could forget that!

Swift handles optionals in a special way: it forces the developer to check whether a variable is nil, if it’s an optional. This is called unwrapping. You need to unwrap an optional before you can use it.

When you forgot to unwrap an optional, you’ll find out before your app runs, which saves you time. This makes you more productive, and your code less buggy.

Unfortunately, some errors can’t be caught by the compiler. That’s when you’ll see this error:

This happens while your app is running, in the following scenarios:

In 99% of cases you’ve force-unwrapped an optional with ! and it was nil, so that’s the first place to look when you run into this error.

The most common scenario for the fatal error: Unexpectedly found nil while unwrapping an Optional value error is when you’ve force-unwrapped an optional and it was nil.

So far so good. This is what happens in the code:

Now, let’s assume that this code can run before the user has logged in. When the user hasn’t logged in, username is nil – that’s why it’s an optional.

A login form is presented to the user, but before the user could login the above code already runs. What happens?

This is what happens:

It’s because you force-unwrapped the optional and it was nil. You could have of course avoided running this piece of code before the user logs in. Most apps however have many moving parts that run independently, and you can’t always avoid that one piece of code runs before or after the other.

How do you solve it? Easy!

Before you force-unwrap username, you check with an if-statement whether username is nil. When username is nil, the code inside the squiggly brackets { } isn’t executed.

However, there’s a much more elegant way of unwrapping optionals. Read on!

Another scenario for the Unexpectedly found nil while unwrapping an Optional value error is when you’ve used implicitly unwrapped optionals.

Implicitly unwrapped optionals are optionals that you don’t have to unwrap. Like their name says they’re unwrapped automatically when you use them.

Logically, when username is nil the code crashes again:

So why use implicitly unwrapped optionals at all?

If you’re just starting out with coding Swift, it’s recommended to not use implicitly unwrapped optionals unless you have a specific need to do so.

In case you’ve created an implicitly unwrapped optional to avoid the pain of constantly unwrapping variables, then think again – you’re throwing away one of the safest, most powerful, and most productive features of Swift!

The best way to avoid the Unexpectedly found nil while unwrapping an Optional value error is to learn how to safely unwrap optionals.

You can use 3 ways to unwrap optionals:

If you’re not sure, use optional binding. Say you’ve coded a view controller outlet, like this:

It’s an optional, as denoted by the ?. When you want to use it, for instance in viewDidLoad(), you can use optional binding to unwrap the optional:

Within the squiggly brackets a constants label is declared, and assigned the value of textLabel. This only happens when textLabel isn’t nil!

In other words, when textLabel is not nil, you’re creating a new constant label, assigning it the value of textLabel, and also executing the code within if-statement. It’s super effective!

Similarly, you can also use optional chaining. Like this:

This code is exactly the same as the example above, but it uses optional chaining instead of optional binding. See the ? after textLabel? When textLabel is nil, the line stops executing. You can’t access the property text on a value that’s nil, so with optional chaining you can avoid that the code continues running.

You can even create an entire chain:

In the above example, url will be nil when either user, data or avatar is nil! You can even combine optional chaining and optional binding:

In the above example, the url constant is only printed when none of the properties are nil.

Optionals can be tough to wrap your head around, but once you understand how to safely unwrap them, you can be sure that you’ll get this error a lot less often:

Here’s what to keep in mind: