Written by LearnAppMaking on August 5 2020 in App Development, Play With Code, Swift 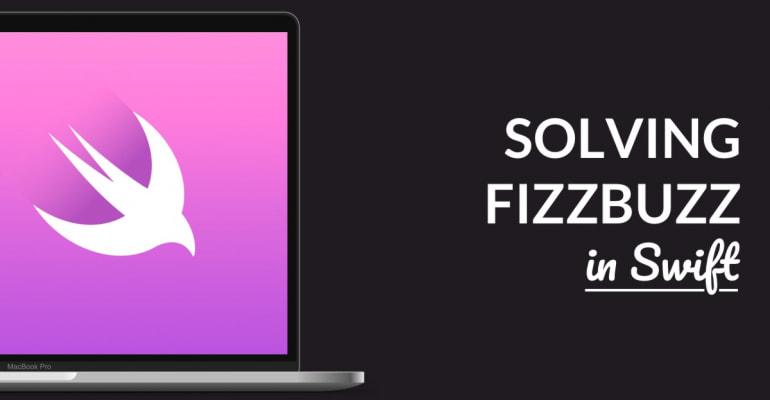 FizzBuzz is a legendary coding challenge. You simply must give it a try! But… what approaches can you use to solve FizzBuzz with the Swift programming language?

In this tutorial, we’re going to solve the FizzBuzz challenge in three different ways:

A while ago I did a live screencast, where I walk you through FizzBuzz. You can watch it here.

FizzBuzz is a coding challenge. Its instructions are:

The point of FizzBuzz is to “test” if a person knows how to code. It’s commonly used in coding interviews to test the problem-solving and coding skills of a candidate.

What’s so interesting about FizzBuzz is that its solution is counter-intuitive, and can’t be solved elegantly or efficiently. This often confuses beginner programmers, which makes it an interesting challenge.

As you’ll see in the next section, FizzBuzz can’t be solved with a simple if-this-then-that approach. You’ll have to duplicate some of your code, which will make you second-guess your solution if you wanted to make your code as elegant as possible.

Let’s have a look then, shall we?

Fun Fact: No employer or client has ever asked me to solve FizzBuzz in a coding interview. They did ask me, however, to sort giraffes in groups of ascending heights. The differences in heights in a group couldn’t exceed 1, because that would make the giraffes insecure… I’ve included a few brain-tickling coding challenges at the end of this tutorial.

We’re now going to write the most basic solution for FizzBuzz, step-by-step. The first step is of course, a for loop:

The above for loop will loop over the range 1...100 and print out its individual numbers. So far so good!

The next step is to find out if a number is divisible by 3. Here’s how:

That results in the output:

The result of the i % 3 == 0 expression is a boolean, so you can use it in an if-statement (also called a conditional). When the expression is true, “Fizz” is printed. When it’s false, the else block is executed and the number i is printed.

Instead of the modulo operator %, you can also use i.isMultiple(of: 3) in Swift. This is clearer but more verbose.

Now, let’s extend the code to also test for divisibility by 5. Like this:

Why doesn’t it print “FizzBuzz” too at this point? Because the if, else if and else blocks are evaluated one by one, from top to bottom. When one expression is true, the expressions below it aren’t executed. So, when i is divisible by 3, the first block executes, and the other block do not.

So… how can you incorporate “FizzBuzz” at this point? That’s what the whole challenge is about! You have two options:

Let’s look at the first approach. It goes like this:

Do you see that nested if-statement inside the first i % 3 == 0 block? It works like this:

This code is pretty hard to read. You can’t immediately assess the behavior of every conditional, and you can’t shake the inelegance of executing i % 5 twice.

Can we use a different approach? Yes! Have a look:

Much better, right? We’re still executing some code twice, but at least it’s readable. You can see at a glance that we’re checking if i is divisible by both 3 and 5, or just by one of them, or else.

A most efficient value of i here is 15, for example, because that hits the first conditional immediately. A most inefficient value is one you can’t divide by 3 or 5, like 7, so you have to execute every conditional before ending up at else.

The Swift programming language has a very cool feature called pattern matching. We can use it with the switch statement to match its different values with different switch cases.

Let’s have a look:

The code is similar to what we had before. We’re looping over 1...100 and printing “Fizz”, “Buzz”, “FizzBuzz” or a number for every iteration of the loop.

Instead of an if statement, we’re using switch. In short, a switch statement takes one expression, and has a number of case blocks for every possible value of that expression.

In the above code, we’re constructing a tuple out of the expression (i % 3 == 0, i % 5 == 0). A tuple combines two values in an ordered list. Because both values in the tuple can be true or false, the full tuple now has 4 different values:

In the switch statement we can now match those tuples to different case blocks. Here, walk through this list on your own:

See how the expressions i % 3 == 0 and i % 5 == 0 are assessed, and its values matched to different case blocks? Note that the default block matches anything that the other blocks don’t match.

Note: The switch statement in Swift has no implicit fall-through, unlike other programming languages. You won’t have to explicitly break a case. When you want a case to fall-through, use fallthrough explicitly.

Just for fun, let’s look at another way of solving FizzBuzz that’s identical to the one with switch, but syntactically different. Check this out:

Even though the way the code works is still the same, it’s syntactically different. We’re using the FIZZ and BUZZ constants to obscure the pattern matching in case, which makes the code more expressive. Neat!

Big thanks for this approach to Tim “Mr. C” Colson.

The previous examples all printed out values to the Console, but what if you want to evaluate a range of FizzBuzz as a whole?

Let’s spice up FizzBuzz! Just because we can. It’s about playing with code, right?

First, we’re going to put FizzBuzz into a closure. Like this:

The code is similar to what you’ve seen before. Instead right now, we can call fizzbuzz() for any arbitrary value and get the right string back.

And then here’s a beautiful one-liner:

Whaaat? How does it work? It’s simple:

FizzBuzz is a terrific primer for coding interview challenges. It helps you to think strategically instead of intuitively, and to assess every different scenario and edge case that can occur in your code. And it’s a whole lot of fun!

Looking for more fun Swift challenges? Check these out:

Conditionals in Swift with If, Else If, Else