Home » App Development » Working with Files on iOS with Swift

Working with Files on iOS with Swift

Written by LearnAppMaking on October 1 2020 in App Development, iOS, Swift 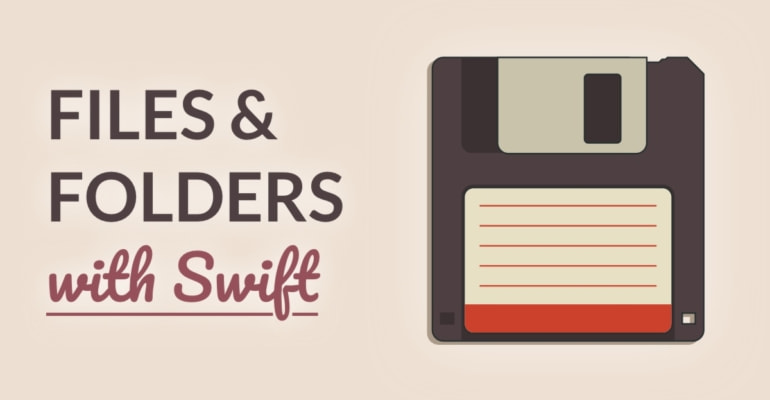 The FileManager component, for iOS development, is an interface to the iPhone’s file system. You use it to read from and write to files in your iOS app.

Working with FileManager, when building your iOS app, can be a bit counter-intuitive. If you’ve worked with files before, on your Mac for example, you’re well aware of how files are organized in a file system that consists of hierarchical directories. You can access any file through its path, something like /home/reinder/Documents/todo-list.txt, provided you’ve got permission to access that file.

Working with files on iOS is different in a few ways:

iOS itself doesn’t have a file manager app like Finder, except for the Files app that gives you access to files in iCloud. iOS is a closed system, which is important to keep in mind.

The FileManager component serves as a wrapper on top of the file system. You use it to get a reference to a file. Here’s an example:

Funky, right? We’ve only created a reference to a todos.txt file in the app’s document directory. The actual file is saved on the iPhone at:

Let’s dive in, and see how that works!

Working with iPhone Simulator? Do a print(path.absoluteString) and then $ open path in Terminal, to open the file or folder at path. Keep in mind that the directory (on your Mac) where a Simulator’s files are stored can change between running your app. The contents of the Simulator is copied, so you may be looking at an outdated file (and wonder why)…

Reading a File with Swift

Reading a file with Swift on iOS requires a two-step approach:

Imagine we’ve stored a few to-do list items in a comma-separated file called todos.txt. How can we read that file from disk and do something with the contents?

The first step is to get a reference to the default FileManager component, like this: FileManager.default ···. This is a shared component on iOS, unique to our app’s process.

We can’t get any arbitrary file from iOS, so we’ll need to use a starting point: the document directory. This is where you store user documents, i.e. files the user of your app wants saved.

We’re going to use the urls(for:in:) function of FileManager to get a reference to the app’s document directory. Like this:

The urls(for:in:) is intended to return common file system directories, such as the documents and temporary files directories. The .documentDirectory is an enumeration value from FileManager.SearchPathDirectory, which is kinda like a hard-coded list of iOS directories you use often. The .userDomainMask additionally specifies where to look for the requested directory.

When working with files on iOS, you use the document directory so often that it makes sense to create a helper function for it. Like this:

Depending on your preferred architecture, you could even create a simple function in an extension:

Good To Know: Files stored in an app’s document directory are also backed up to iCloud when that app is backed up. Only use it for files a user would want to keep. You can exclude files from backing up by marking them with an additional file flag.

The next step is appending the actual file we want to read from, called todos.txt. You can do this with the appendPathComponent() function of the URL object. Like this:

The above code adds a filename to the path we already had. If the filepath we’re working with was an actual hard-coded string-like path, we would have just “added” the filename after the last slash.

Right now, this is what we got:

This is a filepath we can read from, and get the data from the file. The good news is that we’re still working with Swift objects, like URL, in favor of plain ol’ filepaths. The bad news is that this filepath-getting code looks awful…

You may recognize the concept of URLs from browsing web pages, but you can also use the URL standard to identify files on a computer. When doing so, URLs will be prepended with the file:// schema, as opposed to https:// for the web.

Alright, let’s read those todos! With path in hand, reading the contents of the file is easy:

See the try there? That means we’ll have to handle errors, like this:

Given a todos.txt with the text Do the dishes;Make dinner;Walk pet lizzard, the above code outputs:

You can also use the Data(contentsOf:) initializer as an alternative. Instead of reading to a string, this will directly read bytes from the file. You can then work with those bytes further, for example, by creating an image view.

Awesome! Let’s move on to writing to files.

Writing to a File with Swift

Let’s take a look at how you can write to a file in Swift. Just as before, you take a two-step approach:

In the previous section, we’ve discussed how you can get a reference to a file with FileManager, to get a URL of that file. Like this:

If you’ve got a string called todos with a few to-do items, you can write them to todos.txt like this:

In the above code, we’ve got a handle on path and todos. You then call the write(···) function on the string to write it to a file directly.

Just as before, we’re using do-try-catch to handle errors that might occur during writing to the file. It’s also good to know that files that don’t exist yet will be created, and files that do exist will get overwritten.

Reading from an App Bundle File

iOS apps are distributed via a so-called app bundle, which contains the app binary and any resources that you distribute together with your app, such as an app icon.

When you add a file to your app project in Xcode, it’s added to the app bundle. Now that we’ve looked at reading/writing arbitrary files on iOS, how do you read from files in the app bundle?

The approach is the same as before:

First, you need to get a reference to the file in the app bundle. The starting point here is Bundle.main, and not FileManager. Here’s how you get the file’s path:

With the above code, we’re creating a constant path of type URL that contains a reference to the todos.txt file in the app bundle. Just as before, you can now read from that file. Note that path is an optional – in case the file doesn’t exist – which is why you need to unwrap it.

A few things worth noting:

Working with Directories in FileManager

So far we’ve only looked at working with individual files, with the idea that you’d want to get one specific file from the app package. What if you want to organize more files, in directories?

A few common scenarios include …

Here’s how you create a new directory with FileManager:

Whoah! A few things are going on here:

A few things worth noting:

Quick Note: Directories and “folders” are the same thing. Technically, any directory is a subdirectory unless that directory is the system root /.

Pfew! Are you starting to feel grateful for APIs like UIImage(named: "cats") yet? If you’d have to read bytes from the file system directly for every image you want to show on screen, your code would get messy pretty quickly. Working with FileManager isn’t the prettiest, and that’s OK.

Before we call it quits, lets look at a few tips and tricks.

In the below code samples, the documents constant is the path of the app’s document directory. It’s set with let documents = FileManager.default.urls(for: .documentDirectory, in: .userDomainMask)[0].

Given the following JSON file:

How do you read and parse a JSON file with Swift?

How do you write JSON back to a file?

Most libraries that work with JSON have APIs to return JSON as a Swift Data object, which you can also write to disk as discussed. Keep in mind that Codable and SwiftyJSON are simpler alternatives for JSONSerialization.

See that string in the above code sample? That’s a raw string, wrapped between #. When you code a string literal like that, you don’t have to escape double quotes ", which is helpful when working with JSON strings.

Let’s say you’ve got a .plist file embedded in your app project. How do you read from it?

You can learn more about plists in this tutorial: How To: Working with Plist in Swift

Read/Write an Image or Data File

What about images? If you can’t rely on good ol’ UIImage(named:) or Image(named:), how do you go from bits to pixels? Here’s how you can read from an image file and write to it.

Working with images and files in Swift is affected by the image file format, such as JPEG or PNG. You can transform UIImage objects to Data objects represented in various file formats. With an image object of type UIImage, the functions image.pngData() and image.jpgData() return Data objects you can save to a .png or .jpg file.

The NSKeyedArchiver component is super helpful for creating simple data stores. You can create your own Swift object classes and save a bunch of them to a binary file, and vice versa.

With a few prerequisites in place, you can convert a NSCoding compliant object to a data store with:

You can read the same data file back with NSKeyedUnarchiver, like this:

We’ve discussed it before, but here are a few snippets for working with humble plain text files. Here’s how you read a text file with Swift:

Here’s how you can write a string to a text file:

In this tutorial, we’ve looked at how you can work with files and directories on iOS with Swift. You’ve learned how to read from, and write to, various file formats. We’ve discussed working with Data, images, text files, JSON, plists, and much more. Awesome!