Written by LearnAppMaking on April 3 2020 in App Development, Swift 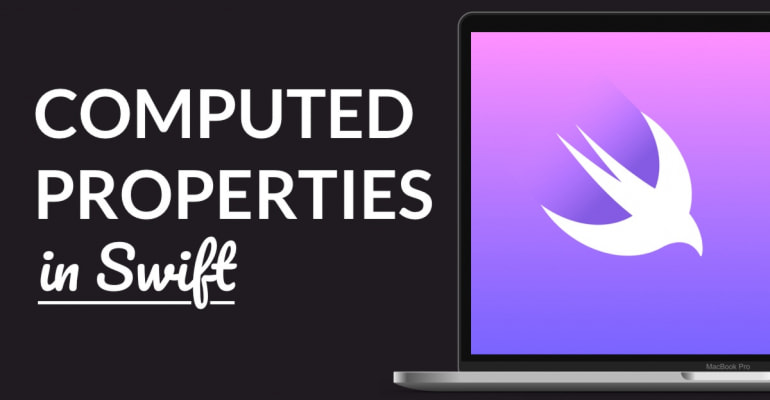 A computed property is a property that calculates and returns a value, rather than just store it. In this tutorial, we’ll discuss how computed properties work and how you can use them in your day-to-day iOS development.

Before we discuss computed properties, let’s do a quick recap of what properties are. Here’s a quick summary:

Let’s move on. A computed property calculates a value, rather than store it. Here’s an example:

In the above Swift code, we’ve defined a struct called Rectangle. It has two properties width and height of type Double. The third property, called area of type Double, is a computed property. Here it is once more:

The above area property executes the code width * height, and return its value, when it’s is called. Here, check this out:

In the above code, we’ve defined a square with a width and height of 12 units. We then calculate the surface area of the square by referencing the area property of square, and print out its result. Internally, the code width * height is called, i.e. 12.0 * 12.0 = 144.0, and returned.

If we had defined the area property as a function, it would have looked something like this:

See how that works? A computed property is kinda like a function, but different. Computed properties have a dense, concise syntax – and when used well, they make for more expressive and clearer code.

Note: In the above example, for area, we’ve created a read-only computed property, which uses an implicit return. More on that, below!

OK, so far we’ve established that a computed property calculates a value. They execute some code when you call ’em, and they’re different from stored properties and functions. So far so good!

Computed properties can also provide a custom getter and setter.

Let’s take a closer look with an example:

The computed property name has a custom getter and setter defined. Here’s a quick overview of the syntax we use for that:

In the previous code sample, here’s what happens:

We can use the local newValue constant as the value that’s provided, so we have access to both the new and the current values. This newValue constant is implicitly available inside the setter, so you don’t have to declare it explitly. You can, however, provide your own constant name, if you want. Like this:

Quick tip: For the sake of this example, we’re assuming that all person’s first and last names are separated with one space character. This isn’t true in the real world, of course – names come in all shapes and sizes. Yay!

We’ve looked at getters and setters for computed properties in the previous sections, but what about a property that only has a getter? That’s a read-only computed property; it can only be read, and not set.

In the above code, we’ve defined a struct Circle that has a stored property radius and a computed property circumference, both of type Double. We can use it like this:

That circumference property is computed and read-only – it only has a getter. In fact, the above declaration of circumference is exactly the same as this:

Comparing it against the previous code sample, you see two differences:

Awesome! Let’s look at a few real-world scenarios for computed properties, next.

Practical Use Cases for Computed Properties

Let’s look at a few real-world use cases.

First, the read-only computed property is ideal for expressing simple calculated values concisely. Consider the circumference of a circle, that we’ve discussed before. You can, for example, provide a person’s formatted address based on individual values. Like this:

More specifically, the above properties make sense from a stored database perspective. The address property is essentially a view into the model data of Person. You don’t have to store the complete address, just its individual components. You can them present them in any way you want.

Secondly, you can use computed property getters and setters to adjust other values than a property itself. Here, check out this example:

In the above code, we’re creating a struct RentalCar that has a two properties:

We could locally say that the cost per week of a rental is the cost per day times 7, and vice versa. In the above code, you see that the costPerDay is the absolute determining factor for renting a car for any length of time.

In your development, you can now work with either day or week units, thanks to computed properties. Your code is, as far as this example goes, more concise and easier to read. The ratio between days and weeks is also an implementation detail of the RentalCar struct itself, so your interfacing code doesn’t have to worry about mediating between the two. Awesome!

In this tutorial, we’ve discussed how to work with computed properties in Swift. We’ve looked at read-only properties, getters and setters, and practical examples in real-world iOS development.