Home » App Development » How To: Get Started With CocoaPods

How To: Get Started With CocoaPods

Written by LearnAppMaking on February 28 2019 in App Development, iOS 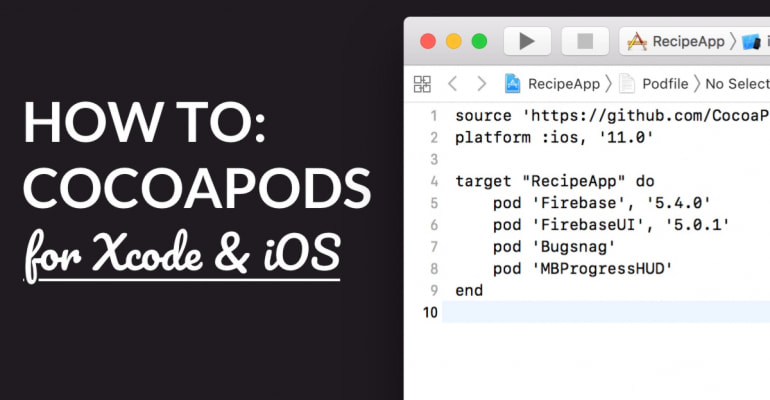 CocoaPods is a package manager for iOS apps. In this tutorial, you’ll learn how to use CocoaPods to integrate third-party libraries into your iOS apps.

Learning how to work with build tools, such as CocoaPods, is a must-have for practical iOS development. CocoaPods makes dealing with dependencies easy, and conveniently helps you to keep your project up-to-date with the latest library versions.

In this tutorial, we’ll get into:

And a whole lot more! Let’s get to it.

Of those 3 options, using a package manager makes the most sense. Here’s why:

In this tutorial, we’ll focus on CocoaPods. It’s the oldest and most mature package manager for iOS (and Mac, tvOS, etc.) and it’s incredibly easy to use.

A pod also uses a special configuration file, called a “Podspec”, which includes information about the third-party library, such as additional dependencies, versions, license information, and so on. Here’s an example podspec, from Alamofire.

CocoaPods maintains a list of all available libraries and Podspecs. This list will get downloaded the first time you use CocoaPods, and may sometimes need to be re-synced and updated. Because of these Podspecs, CocoaPods knows exactly how to add any third-party library to your iOS project. You can find all libraries on cocoapods.org.

The biggest difference between CocoaPods and Carthage, is that CocoaPods changes your Xcode workspace, whereas Carthage merely builds dependencies and lets you add them to your project yourself. Also, Carthage is decentralized, whereas CocoaPods downloads so-called “specs” from a central location.

How To Install CocoaPods

Installing CocoaPods is fairly easy. CocoaPods is built with Ruby, a popular and robust programming language. It’s distributed as a so-called “gem”, which is – how meta! – Ruby’s way of package management. Ruby is installed by default on macOS, so you can use it rightaway.

To install CocoaPods on your Mac, open Terminal and execute the following command: 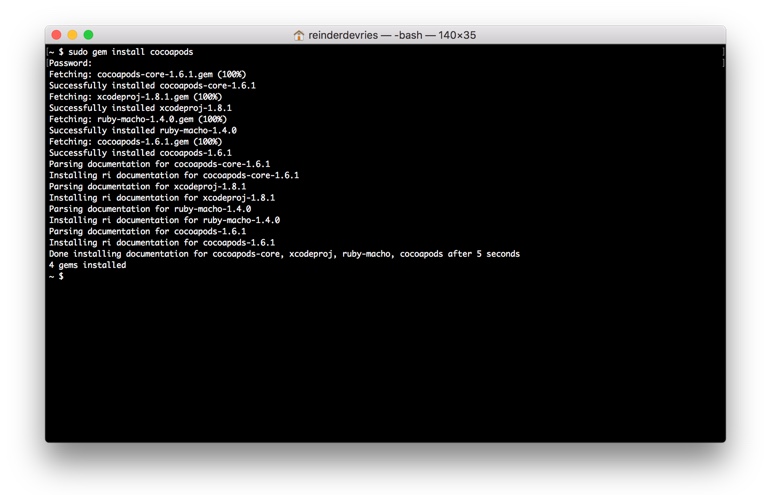 CocoaPods will now install system-wide on your Mac. You may need to input your administrator password, because the gem command temporarily needs administrator access to install CocoaPods for the duration of the installation.

If you need to update CocoaPods to a newer version later on, you can just run sudo gem install cocoapods again. CocoaPods will tell you when a new version is available, if you run any of its commands. It’s a good idea to keep CocoaPods up-to-date, especially around new Xcode releases.

Now that CocoaPods is installed, let’s move on!

A Podfile is the central configuration file that contains information about what pods you want to use in your iOS app project. It also typically includes some build settings.

You can create a new file in Xcode by choosing File -> New -> File..., then choose the Empty template, click Next, and name the file Podfile. Just Podfile, so no extension or anything else. Make sure to save it in the same directory as your Xcode project file.

Always add the Podfile to the same directory your .xcproj file is in! Otherwise CocoaPods won’t be able to find it.

And here’s what all those lines mean:

The pod parameter deserves some more attention, so let’s take a closer look:

The syntax is simple: start with pod, then the pod name, and then a version number. You can find the exact names of pods on cocoapods.org, and most GitHub project pages also tell you what the name of their library is. Don’t forget comma(s) , and the single quotes ' though – it’s easy to make a typo.

A pod’s version number is important, because you can use some special syntax to fine-tune what library versions you want to work with. Let’s take a look at a few examples.

It’s worth noting here that CocoaPods, and many software packages and apps, use semantic versioning. In short, that means that version numbers follow the x.y.z format, or better known as major.minor.patch.

Now you hopefully see that the optimistic operator ~> is quite useful, because it allows you to specify a group of versions you want to stay up-to-date with, while avoiding to “go over” a certain minor or major version.

Alright, now that your Podfile is in place – let’s get to work integrating it with your Xcode project.

It’s good practice to browse to your favorite library on GitHub, and click the Releases button. On that page, you can see the latest releases of the project, including their version numbers and release notes. Can you spot the different major, minor and patch versions? Some libraries even work on multiple major versions at once!

Now that the Podfile has been set up, CocoaPods can integrate the libraries with your Xcode project.

To do so, open Terminal on your Mac and use cd to browse to your Xcode project’s directory. Something like this:

Then, simply run the following command in Terminal:

CocoaPods will now read your Podfile, download the appropriate versions of pods listed within, and add them to an Xcode workspace.

Quick Note: CocoaPods will download the main Podspec the first time you use pod install, which is a large file, so it may take a while to download. You may or may not get progress updates, so it may appear as if Terminal is frozen – but it’s not. 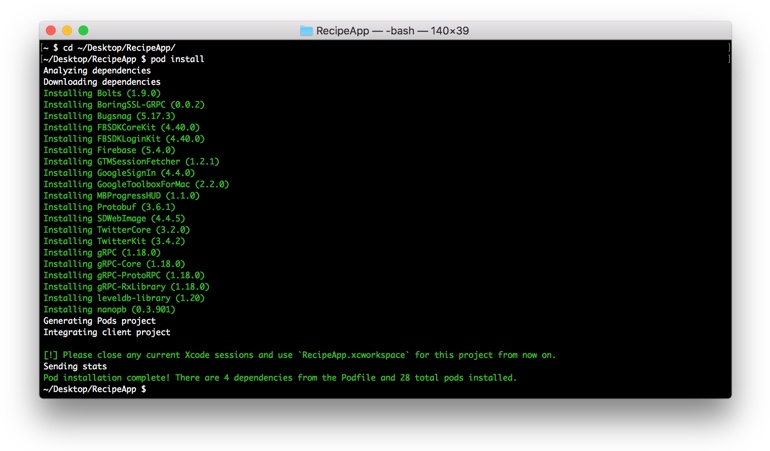 It’s important that from this point on, you use the .xcworkspace file to develop your app project. You can simply double-click on that file to open the workspace. You’ll see two projects inside: your original project, and a Pods project that CocoaPods added.

And that’s all there is to it! You can use the library in your own iOS app project, and conveniently manage your project’s dependencies from now on.

Quick Tip: If your original Xcode project appears “collapsed” when opening the workspace, make sure to first close the original project in Xcode, and then reopen the workspace.

CocoaPods has a few commands that come in handy:

A common misconception is using pod update when you’re only adding or removing pods in the Podfile. The pod update command is intended to update pods to a newer version, if they’re available. You can also update specific pods with pod update [podname].

It’s worth noting here that CocoaPods keeps track of which pod versions are installed in your project with a file called Podfile.lock. It’s a plain text file, saved in your project’s root directory, and – why don’t you have a look at it?

CocoaPods uses Podfile.lock to compare the currently installed version of a library against a newly available library version, while taking into account the version constraints you set in your Podfile.

Are you using version control in your project, such as Git? Always push and commit the Podfile.lock, otherwise CocoaPods has no way of knowing which pod versions are integrated with the project.

You may choose to include the /Pods directory, i.e. the pods themselves, into source control. My personal preference is including them, because it adds some safety and integrity to a project, for example when a library goes AWOL, and because you can build and run the project right after cloning it from the repository.

Working with build tools like CocoaPods, or any other package manager, is one of those skills that every practical iOS developer needs to master. CocoaPods makes dealing with dependencies a whole lot easier, and it helps you avoid conflicts in your iOS projects.

In this tutorial, we’ve looked at: