Home » App Business » How To Build Apps for Enterprise and B2B

How To Build Apps for Enterprise and B2B

Written by LearnAppMaking on July 10 2019 in App Business 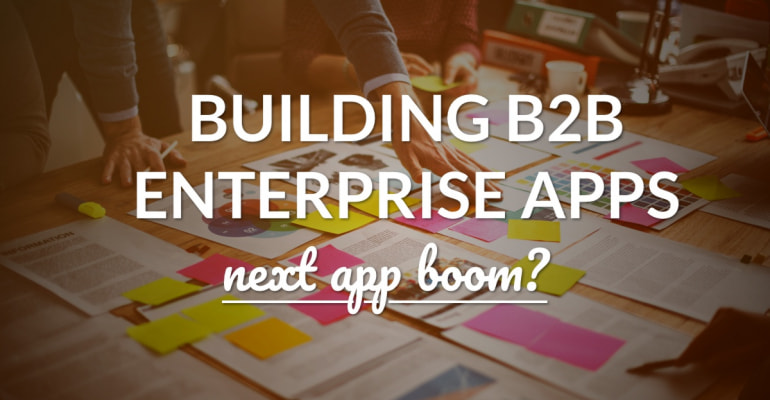 Building apps for enterprise and B2B is the next app boom. Apps usage in the workplace has increased, and it’s slated to grow even more. The savvy app developer knows how to benefit from a new market. You’ll learn how, in this tutorial!

Let’s get a move on.

Before we discuss why building apps for enterprise and B2B is the next app gold rush, let’s begin with where it all started…

Apple’s App Store launched in July 2008, with an initial 500 apps. Since then, it’s grown into an economy of its own: to date, Apple has paid out over $100 billion – with a B – to app developers worldwide. In 2019, the App Store counted more than 2.2 million apps for iPhone and 1 million apps for iPad. Even if a significant amount of that is “app rot”, it’s still a staggering amount of applications.

In 2018–2019, we’ve begun to see reports about the sales of iPhones slowing down1. Apple simply isn’t selling as much iPhones as it used to. Mind you, we’re still talking about $31 billion in revenue from the sales of iPhones in Q2 of 2019. People are still buying iPhones in droves – there’s not just as many of them as there used to be.

At the same time we’re seeing reports that people are spending more time in apps, but have fewer apps installed on their smartphones2, 3. Smartphone users are less willing to try out new apps, and reportedly use 30 apps on average per month. Contrast that with the 3.2+ million apps in the App Store, and you may feel less inclined to launch a new app.

As the app boom is fading, a shift is happening in the app economy. We’ve gone from trying out new apps to keeping a small ensemble of go-to apps on our smartphones. The clichéd slogan “There’s an app for that!” has changed into a question: “How does this app benefit me?” This is good news for the independent iOS developer who is building apps to solve a problem, but bad news for the app developer who merely relies on novelty.

Why mention iPhone sales? For long, the App Store has boosted the sales of iPhones. People wanted a device to install their apps on. And people needed apps to install on their new devices. The network effect of games, social media, dating and messaging apps led people to buy new tech. Combine that with year-by-year innovation cycle in the early days of the iPhone (2008-2014), and you’re starting to see why iPhone sales and the popularity of apps go hand-in-hand. A lack of real innovation could explain why iPhone sales are slowing down.

Apple’s seeing the same scenario play out, and that’s why they’re banking on services as the main source of revenue for the coming years4. Now that everyone has an iPhone, let’s sell stuff that people need on their iPhone. A subscription model for every app or service: cloud storage, music, news, TV, education, security, and so on. Apple’s riding this wave out, until the next wave of innovation comes along (AI, AR, VR).

So now that we’ve all got an iPhone, and got all the apps we ever wanted, and paid services are coming into play, what’s next for app developers looking to make a buck?

Given what we discussed in the previous section, I’m seeing two opportunities for app developers:

I’ll leave point no. 1 for a next article; we’re going to discuss the rise of enterprise apps and B2B. It’s the next app gold rush.

First off, what do teams, enterprise and B2B apps have in common? They’re used by professionals. We’re talking about solving problems for people who are at work, as opposed to entertaining or helping consumers in their off-time. This is an important shift.

Here’s how I define these 3 groups:

These 3 groups obviously have a lot of overlap. An app could be developed by a team in an enterprise-level organization, which is then sold as a service to other companies and teams. What’s important to understand for the story going forward, is how these enterprise apps started. After all, you’re going to make that same start with your own enterprise/B2B apps.

Let’s take a look at what enterprise/B2B apps mean for the app economy. A few interesting tweets:

And with the 129 formally supported apps, there are probably an additional 1,000 apps (based on security and network estimates) used by employees with informal or non-existent integration & support that need to be managed as services, integrations, identity, & cross-charged costs

This discussion on Twitter makes a few notable points:

If you contrast this with the consumer app market, you see that teams, enterprise and B2B are using more apps, and that this usage is trending upwards instead of downwards.

Businesses that use apps often need support, maintenance and integration. App A needs to be connected to app B, so that data can flow between them. Guess who’s going to build that? App developers! And if you know how to code, that means you.

“The business world’s growing appetite for apps showcases the move over the last 10 years from single vendors with all-in-one platforms to “best-of-breed” applications, Todd McKinnon, Okta’s chief executive officer, told CIO Journal. He describes the trend as positive, in that it reflects the widespread adoption of new, innovative technologies.”

The above is an interesting signal. Instead of looking toward all-in-one solutions, companies are now looking for “best-of-breed” apps. Said differently, companies are moving towards apps that do one thing well. They’re getting out of the mindset of a preferred vendor, and instead seek out a preferred app – from any vendor.

OK, if you’re not yet convinced by these numbers, then let’s dig a little deeper. What are second-order effects of the B2B app boom?

Let’s move on. How can you, the iOS developer, benefit?

What you’ve read so far are facts, interwoven with some predictions, insights and opinions. Merely knowing these things won’t take you far, so how do you take action?

We’re going to take a look at 3 approaches to generate revenue, make money, and drive business with B2B/enterprise apps:

1. Build an in-house tool and spin it off

This is actually simpler than it sounds. What’s a tool that you, your team or your company uses in-house that you can publish publicly as a paid product?

It’s stupid to aim to be the next Slack, because that’s a mountain you can’t easily scale in one step. What’s smarter, is to build something that you yourself would use. What would you want someone else to build for you? Be your own first customer, and find out what tool or tech makes your own work better. Scratch your own itch.

The next step is validating whether that same solution works for someone else. Are potential customers willing to pay money for your product? That may be as simple as sending out an email to friends, colleagues, clients and customers, or by creating a simple website to collect signups. Focus on finding out if potential customers are willing to pay for your tool, and you’re half-way there.

2. Build a B2B services app that fulfills a need

You can also build a tool around a service, as opposed to building a tool from scratch. This is typically called Software-as-a-Service or “SaaS”. A SaaS’s value is derived from the value of the service it provides. And that service needs to solve a problem for your customers.

The hard part about building a SaaS app from scratch is that you don’t have a product, and don’t have customers. Paradoxically, it’s smarter to start with the customers instead of the product. Are there any audiences, niches of groups of people that you regularly chat with? Find out what their problems are, and start there. What kind of delightful app can you build specially for them?

What you’re building doesn’t need to be disruptive, ground-breaking or even innovative. Think about bottled water: it’s far more expensive than tap water, but people are willing to pay money for the convenience of quenching their thirst whenever they want to. It’s also incredibly boring – and a luxury.

A simple approach is to find an audience that you have access to, and then ask them what their current problems are. Just put some feelers out, and talk with the people that you seek to serve. Can you build a product around solving that problem for them, and other businesses?

In the past, I’ve been involved in these B2B solutions:

The third approach to generate revenue with B2B/enterprise apps – without building a product – is to simply provide systems integration services. It’s the boring, lucrative part of what people simply call “IT services”.

Imagine a company, called Acme Inc., is using Salesforce to do accounting, or Customer Relations Management, or something like tracking sales. This company also has an app that they want to integrate with their back-office. Customers of this company can order “widgets” via the app. Currently, requests for widgets need to be put manually into Salesforce.

You can imagine that moving data from one system to another, manually, is quite labor intensive. It could be done faster, cheaper, and equally effectively by a bit of computer code that integrates both systems with each other.

In some cases, you’ll find that Salesforce already offers an integration like this off-the-shelf. In other scenarios, tools like Zapier can facilitate the integration with zero coding. But in many cases, systems integration is completely custom.

That’s where you come in, as a software developer. You can profile yourself as a systems integration expert, and step in to complete the work. You’ll need to build your professional network, of course, and spread the work that you’re for hire. But once you’ve got a few clients, and the word spreads, you’re in business.

It may not be as hard as you think it is. What’s keeping you from calling up a few local brick-and-mortar stores in your area? Ask them what their current issues are with systems integration, like accounting, cashier systems, Point-of-Sale apps, or even their website. Ask – and listen.

Writing articles like this always gets me so excited. There’s so much opportunity here! And the App Store is changing in ways that benefit the iOS developer with an eye for good business.

Always remember: the word “app” comes from “application”, and the word “application” comes from “applying a workflow or solution to a given problem” (more or less). Apps give us control over solving a particular problem. And solving a problem for someone else is worth money. As long as you remember that, you’ll be in business forever – provided you have the means to tell people about your solution.

Get Started with the App Subscription Model