Written by LearnAppMaking on March 26 2021 in App Development, Play With Code, Swift 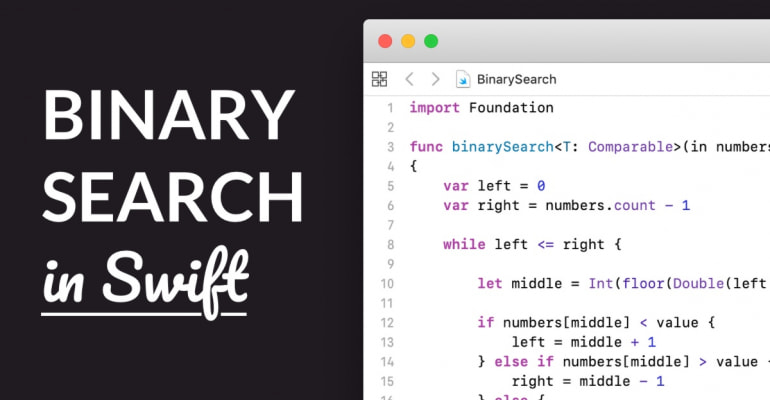 Binary search is a simple algorithm that lets you search an array for a specific value. It’s trivial to implement in Swift, which makes it exceptionally helpful for beginners as an introduction into algorithms. And it’s also a lot of fun!

In this tutorial, we’re going to code a binary search algorithm from scratch in Swift. It’s good practice, and we’ll learn some interesting tidbits about Swift along the way.

Finding a Value in an Array of Integers

Imagine you’ve got an array of numbers, like this one:

You need to find a number in this array of integers. For example, the number 13. But why would you try to find it? It’s right there, between 11 and 17!

Well, consider that you need to know the array index of number 13, because you need to update or delete that number from the array. The only way to do that is by using its index.

How do we find the index for number 13? The naive approach is to loop over every number in the array to check if it’s 13. Like this:

This works, but it’s also inefficient. In the worst-case scenario, you need to iterate over every number in the array to find the one you’re looking for.

Technically speaking, we’re saying that the time complexity of the above algorithm is O(n) – and that’s not good enough! Can we do better?

Keep in mind that binary search only works for sorted arrays, and for numbers that can be compared logically. Binary search is related to the binary tree data structure, in which values can be looked up incredibly fast.

A better approach is the binary search algorithm. In short, binary search works by constantly dividing the array of numbers in half, until we’ve found the number we’re looking for. Because the array is sorted, we can use logic to figure out in which half of the array the number is.

Let’s first discuss how the algorithm works exactly, before we write it in code. Here, check out this diagram:

How does it work? Let’s go over it, step by step. First, we’re starting out with an array of integers. They’re sorted smallest to biggest.

We’re looking for the index for number 13 in the array. You can easily see that the right answer is index 5, but how can we get there with code without iterating over each number?

The essence of the binary search algorithm is dividing in half, and comparing the number in the middle against the number you’re looking for. Based on this comparison, you select either the left or the right half, and start over again.

Let’s write some code to make that happen!

Alright, let’s get started. First, we’re going to set up a function for our Swift code. Like this:

In the above code, you can see that the name of this function is binarySearch(in:for:). It has two named parameters, numbers of type [Int], and value of type Int. The return type is Int?, an optional, because we might not find a value. In other words, we’re going to search an array of integers for an integer, and optionally return an integer value (the index).

Next up, we’ll need some way to keep track of the left and right bounds of the array. Like this:

Then, we’re going to iterate over the array. We’ll use a while loop for that. We don’t know exactly how many iterations we’ll need, so we cannot use for in.

Then, inside the while loop, we’re doing this:

There it is! The code to calculate the middle index of the array. Here’s how it works:

The above code uses the Int() and Double() initializers to transform the result of the equation to the right variable types. The floor() function works with Double values, but the type of middle needs to be Int.

Then, finally, the heart of the algorithm. Below the previous code, we’re adding this:

What’s going on there? Here’s what:

This is perhaps the most complex part of the algorithm to grasp, so let’s break it down. First, you need to understand that we’re comparing the middle number in the array against the number we’re trying to find. This can have 3 outcomes:

In the other two cases, we need to change the slice of the array we’re looking at next. Remember that the array of numbers is sorted. So, we can safely say that:

Take a look at the diagram below again:

We’re searching for 13, right? In the first step, we’ve found that the middle number is 11. The number 11 is smaller than 13, which means that we’ll find number 13 in the right half of the array.

So, what about those left and right values? They help us manage the left and right bounds of the “slice” of the array we’re looking at. Initially, this is the entire array.

But then, after the first step, we’ve decided to look at the right half of the array. How do we change left or right to reflect that value?

In the second step, the exact opposite happens. We’ve started out looking at the entire right half of the array. The middle number in that right half is 19, and 19 is bigger than 13, so now we must look at the left part of that right part. Are you still with me?

Here’s how we change left and right:

In the last step, we’re calculating the middle index, and we find out that its value is exactly the same as the number we’ve been looking for. The else clause of the above code block is invoked, and we’re returning middle, which is the index of the found number.

And last but not least, we need to incorporate some code that returns nothing when the number isn’t found. On the last line of the function, outside the while loop, we’re adding this:

This code is reached when the while loop has finished executing, but hasn’t found a number. Awesome!

Pfew! That’s quite a bit of code, right? Here’s what we’ve come up with:

Let’s put it to good use. Can we find the index for number 13?

If you want, you can try out the code below. It’ll output what it’s doing, thanks to some print() statements, so you can see what’s going on inside the algorithm.

If you want to expand the binarySearch(in:for:) function to include any type that’s logically comparable, then change its signature into:

The function now uses generics to accept input for any type that conforms to the Comparable protocol, such as integers and doubles.

The big question is, of course, whether binary search is more efficient than our naive, linear approach. Yes, yes it is! The time complexity of binary search is O(log n), also called logarithmic time.

Here’s why: for every step that the algorithm takes, the number of remaining steps is reduced logarithmically.

In other words, if the input array is twice as big, we only have to take one more step to find a number in it. Compared to the naive approach, in O(n), that same array would take twice the amount of work!

Awesome! You’ve mastered the binary search algorithm in Swift. We’ve gotten to the core: chopping arrays in half, and comparing their middles against the number we’re looking for.