Written by LearnAppMaking on April 15 2020 in App Development 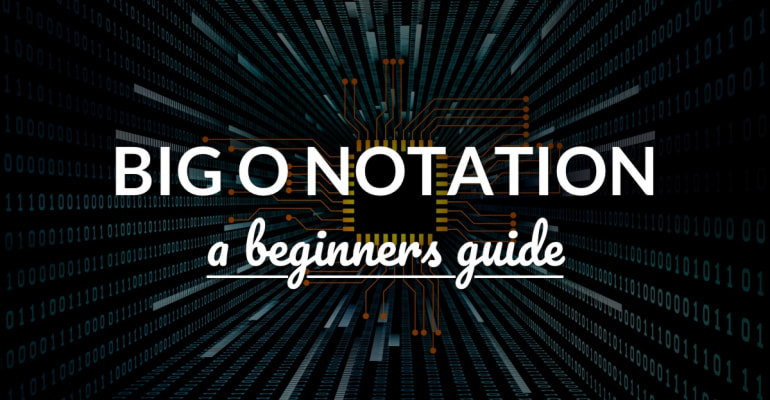 Big O notation is a topic that can make your head spin, especially if you’re new to algorithms.

You use big O notation to describe how efficient an algorithm runs, compared to other algorithms. And we get an idea about how much more work an algorithm has to do, as the size of its input grows.

What Is Big O Notation?

Imagine you’re building a music app, and your boss wants you to code an algorithm that makes music recommendations. Kinda how Amazon tells you “Products You Might Also Like”, but then for a few million music tracks across a few dozen genres.

You go to work. You build an algorithm that determines a likeness score for every music track, compared to another track. For each track you select 5 other tracks with a likeness that exceeds a certain threshold.

Once the algorithm has done its work, users of the music app would be able to see 5 similar music tracks for every track they’ve liked.

So far so good! Your algorithm works fine comparing a few of your own favourite tracks, and predicts with some certainty other tracks you might also like. Awesome!

Your computer’s CPU shoots to 400%, its memory is at max capacity, and the whole algorithm grinds to a halt. It is too much work! At this rate, it’ll take weeks for the algorithm to finish…

That’s where time complexity and big O notation come in. Big O notation is used to classify algorithms, based on how their running time grows relative to the size of the input for the algorithm.

Let’s break that down:

(There are more groups, but let’s not get into those today.)

Check out the graph of the above time complexities, below. You can judge by the steepness of some of the lines how quickly an algorithm’s runtime grows, as its input size grows. Ideally, we want to stay on or below the green line.

With big O notation, there are two things we also talk about:

An example: If you’re searching an array for a particular value, you might find it at your first guess. Does this mean the algorithm is fast, or that you just got lucky?

What’s more interesting is what happens to the time it takes to run an algorithm when the size of the input gets extremely large, and what happens if we have to process all that data. That’s why we’re looking for the worst case scenario.

Let’s take a look at a few examples.

The simplest of time complexities is constant time. An algorithm that runs in O(1) will always execute in the same time (or space) regardless of the size of the input.

Here’s an example in Swift:

The above code gets an item from an array by using an index number. It doesn’t matter if this array has 10 items or 10.000, it’ll always take the same time to get an array item by its index number. The complexity of looking up a value in an array is O(1).

Why is it so fast? The algorithm to retrieve an item from an array by index number can directly calculate the memory address of that data, based on the index. It doesn’t have to iterate or search the array – it’s a direct, instant operation.

Functions with a constant time complexity are important in software development, because O(1) algorithms execute efficiently regardless of the size of the input. Common operations like getting an item from an array by index or pushing a value onto a stack are all O(1) operations.

But that’s not what big O notation is about! We’re talking efficiency here relative to the size of the input, not absolute performance as in “this algorithm takes 5 minutes to run.”

What’s more interesting, is algorithms that execute in linear time. This means that the time the algorithm takes to complete grows linearly with the size of the input. With twice the input, we need to do twice the amount of work.

This is an algorithm in Swift that calculates the sum of an array of integers:

The algorithm iterates once over every item in the array. So, as we add more numbers, the work the algorithm needs to do also grows. At what rate does it grow? At a linear rate, so its complexity is O(n).

A good example of an algorithm that runs in O(n) is finding an item in an array, whose index is unknown. In the worst case scenario, you have to check every item in the array to find what you’re looking for.

A good shorthand for determining the time complexity of an algorithm, is to count the number of n‘s, i.e. how many times you loop over the input.

This is where we really have to do some work. For algorithms that run in quadratic time, with O(n2), the time it takes to run them grows directly proportional to the square of the size of the input.

Going back to our music recommendation app, this is where we ran into trouble. Because we’re checking every song against every other song, we’ll have to check every song again if we only add one song to the dataset! You see how that grows exponentially?

In most scenarios, and for large data sets, algorithms with quadratic time complexities take a lot of time to execute. So, you’ll either need a lot of resources and time, or you need to come up with a better algorithm.

A good example of a O(n2) algorithm is the insertion sorting algorithm. In short, this algorithm sorts an array of items by taking items out, one by one, determining their sorted place in the output array, and putting them back in. It does so by looping over the array items once for every array item, effectively using two nested for loops. This results in a time complexity of O(n2).

Want to play with coding a O(n2) algorithm? Check out these tutorials:

An algorithm that runs in O(log n) reduces the amount of work it needs to do as it progresses through the data set. The more work it does, the less work it still has to do. This produces a growth curve that is logarithmic. Intruiging, right?

A good example of a logarithmic time complexity is binary search. With binary search we’re looking for a certain number in a sorted array of numbers.

Here’s how it goes:

See how the amount of work we need to do halves with every step the algorithm takes? This means that if we double the amount of data the algorithm needs to do, it’ll only take one extra step extra to cut it in half again. If you plot that on a line, you’ll get a logarithmic growth curve, or O(log n).

Want to play with coding a O(log n) algorithm? Check out Binary Search In Swift.

Why is it important to know about big O notation? It’s a relevant discussion for a few reasons:

Why is big O notation useful? Because it informs the way we think about computation. A powerful, fast CPU will run an algorithm faster than a slower CPU – that’s obvious. But as our data set gets larger, an inefficient algorithm will take more and more time to run.

That’s where big O notation comes in, because it can show you how much more work an algorithm has to do as the size of the input grows. You can’t just measure that in CPU speed. You could buy more CPU power, but is that an economic choice? Big O notation helps answer that question.

Big O notation also helps you make decisions. When you’re asked to solve a problem, and you determine it can only be done in O(n2), you can decide to look for an approach with better performance. Likewise, big O notation helps you, for example, understand that quicksort performs better than insertion sort for large data sets.

Don’t just learn about big O notation because it’s part of coding interviews. That doesn’t help anyone, and you’d just forget about it once you’re hired (or not). Big O notation can help you brush up your computer science skills, because it’s a good path into learning more about algorithms and computation.

Big O notation can make your head spin, especially because it feels so abstract. The cool thing about O(1), O(n), O(log n) and O(n2) is that after a while, you start to see them everywhere.

Apple’s documentation for iOS and Swift often mentions the time complexity of operations. You can find out that array subscript runs in O(1) and sort(_:) uses a hybrid sorting algorithm that runs in O(n log n). And now you know exactly what that means!